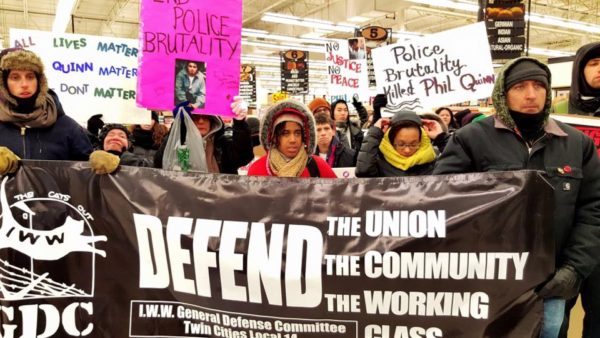 The lügenpresse strikes again. A small group of Alt Right Trump supporters went to a museum for a field trip, not knowing they were infiltrated by an Industrial Workers of the World (IWW) Communist who organized a group to attack them. The Leftists attacked, and the Leftist police reported that the Trump group attacked.

Here is the lügenstory from the doyenne of the Left, The New York Times, hammering hard on the inverted narrative:

But officials at the Minneapolis Institute of Art, that cityâ€™s grand encyclopedic museum, probably didnâ€™t bargain on a version of democracy as messy as the one they got on Saturday, when a Trump-related protest turned violent and made its way into the galleries, with fists and feet flying near artworks.

The confrontation began when a large group of organized protesters, holding banners identifying themselves as the Industrial Workers of the World, held a rally in front of the museum, apparently to condemn the Trump administrationâ€™s plans for more aggressive immigration enforcement and deportations.

Kaywin Feldman, the museumâ€™s director, said security camera footage showed two or three men apparently engaging in an argument with the protesters. When the men went into the museum, anti-Trump protesters followed them inside.

The Leftist press needs to signal to you what you should think. They use strong symbols to this end, in this case the “N-word,” or the ubiquitous and generic accusation of “Nazi,” to tag the field trip as some kind of foray into political violence:

Two witnesses told The Star Tribune of Minneapolis that they had heard the men who agitated the anti-Trump protesters yelling neo-Nazi provocations, and that one of the men was wearing a neo-Nazi or white-nationalist symbol on his jacket. Attempts to reach the witnesses by phone and social media on Monday were unsuccessful.

Translation: two people there, who may have been affiliated with the IWW group, issued their lies and then disappeared. Were attempts made to reach them? Possibly by looking up the fake names they gave, calling someone with that name, and then giving up because the lies support The Narrative that the Left is trying to enforce.

Here is the statement from the Minneapolis Alt Right group:

Our Minneapolis-based group is organized through a private server on an online chat app. Due to a lapse in security and our naivete, a member of the IWW managed to get on our server by pretending to be a Trump supporter. This member learned of our plans to meet at the Minneapolis Institute of Art and alerted the IWW.

We were there only to meet a few new faces and enjoy the Minneapolis Institute of Artâ€™s collection of traditional art. However, when we got there, the IWW protesters were waiting. We had no idea that it had anything to do with us until two of our members were attacked upstairs, simply for how they looked. One was brought to the ground and kicked in the face until security intervened. The assaulters left the area and ran down the stairs where they met another Trump supporter who they violently attacked and maced.

One of the assaulters was handcuffed by the police after he was found carrying an illegal knife. The Minneapolis Police Department made no arrests over this affair…

Now we have two completely different versions of what happened: in one, Trump supporters attacked a Communist demonstration; in another, a field trip by Trumpites was deliberately attacked by Communists who used the cover of a protest and false accusations of Nazism in order to justify their actions.

Which is true? One thing is for sure: you will never know which by reading the lügenpresse.

Update: I received the following email from Randy Kennedy, the author of the piece:

My source was the museum director. I wasn’t able to reach any participants or witnesses yesterday. But last night I was contacted by one of the men who was attacked and we’re going to update the piece today, as soon as I’m able.

As of 5:39 PM today, the article was updated — among other changes, it includes:

â€œWe donâ€™t have an indication of who they were,â€ she said. â€œBut it was obvious that the I.W.W. fellows were going through the galleries looking for them, for their opponents.â€