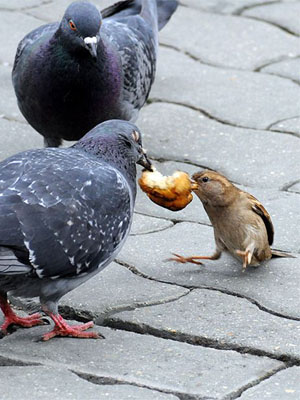 You’re going to see a lot more of situations like this. A law or rule is on the books, and it seems unfair to minority groups, so they protest.

In response, government gives them money. Mitt Romney notices they’re part of the 47%. The rest of the country wonders, “Uh oh. Can I actually say this? That the 47% is mostly non-white and the 53% is mostly white?”

Perhaps the Republican Party is slow to figure it out, but the people voting for the Republican Party are not slow. They realize that the Democrats have been using immigration and domestic minorities to pad the voter rolls, in addition to their homegrown cadre of the disaffected, neurotic, self-pitying and futilitarian.

When people figure out an inkling of this, and I just mean a little slice of it, doesn’t take much, they begin to freak out. First is that they are conditioned to “not notice” (which means force their brains to ignore) race and class issues. They’re already squirming because they are seeing something they are programmed to not accept as true.

Second they’re losing their marbles because they don’t understand it. “Why do they hate us?” asked 4.1 million well-intentioned ladies hired in middle management simultaneously. Burly outdoors types are wondering if this is the great race war.

The answer is a lot simpler. Think back to when you were a kid. How did you make it through school? If you were popular, you joined the future leaders of America types. If not, you made excuses for not being popular, and joined kids who were united by not being popular.

As any high school movie shows us this unpopular group includes at least half of the kids in the school and comprises many subcultures. Goths, punkers, white rappers, nerds, stoners, geeks and surfers.

When these different groups join together, they have the most power in the school by their sheer numbers. Unlike in the movies the popular kids aren’t scheming against the nerds, they’re busy being popular, getting into Harvard and planning how to spend all the money they’ll make at their future careers.

But what it takes to join all these different groups is a kind of social contract that says “because not being popular is part of who we are, we agree to accept each other totally and form a different type of popularity.”

This is what the Democrats, Communists, Socialists and any other non-majority party do. They unite different groups under the banner of anti-majoritarianism or first, not being part of the majority, and second, wanting to unite and take over from that majority.

I had this one job that rewarded people for sales made on the phones. This quickly separated everyone out like oil and water, between the go-getters (annoying tools) who had lots of sales, and the “slackers” who didn’t even bother to harass ordinary people with these stupid sales pitches.

When someone got enough sales to be part of the cool group, they kind of disappeared. This new identity was something they were proud of and they had a new social group. The rest of us just fell off their radar.

During one pre-Christmas rush, all the slackers got together and started just ignoring the go-getters. We wouldn’t transfer calls to them, or give them any information, or even talk to them. The result was total breakdown of the system and who did the burden fall on? The go-getters. For once the slackers were home at Christmas and the “winners” got to spend the night on the phone, explaining Windows 95 networking to the drunk, lonely and bitter.

The American majority is mostly white, middle class, socially conservative and economically classical liberal, religiousish, family centric and essentially nerdly. They’re not cool like the slackers, the minority groups famed for their music and colorful art and cooking, or the Democrats.

Anti-majoritarianism reflects self-doubt on the part of those who hate the majority. If they had the ability, they would either join the majority or find another way to have what that group has. Obviously they have not, so obviously they can not, and this secret in plain sight makes them enraged.

They won’t stop until you the majority are destroyed and replaced with people more like them. Again this is not race, but the mere fact of your majority status, that they will use against you. They don’t care what the truth is. If the facts don’t agree, they’ll fake them. If the newspapers don’t agree, they’ll start their own. They will do whatever is necessary to gain control.

The American majority slept through all the liberal social experiments because the majority believed that these were legitimate ideas to advance society, in the interests of the majority. Instead it turns out to be a replacement and destruction program. The majority now is figuring out that even if they attain minority status, they will still be destroyed through violence, wealth redistribution and lots of hateful laws.

I have observed that almost nobody understands just about anything during this election. People are telling you stupid stuff, like to write-in George Washington or stay home. The real fact is that you can’t afford to. This election will determine whether this country destroys its majority and thus becomes a third-world war zone, or reverses course and regains its former greatness. There are no other options.