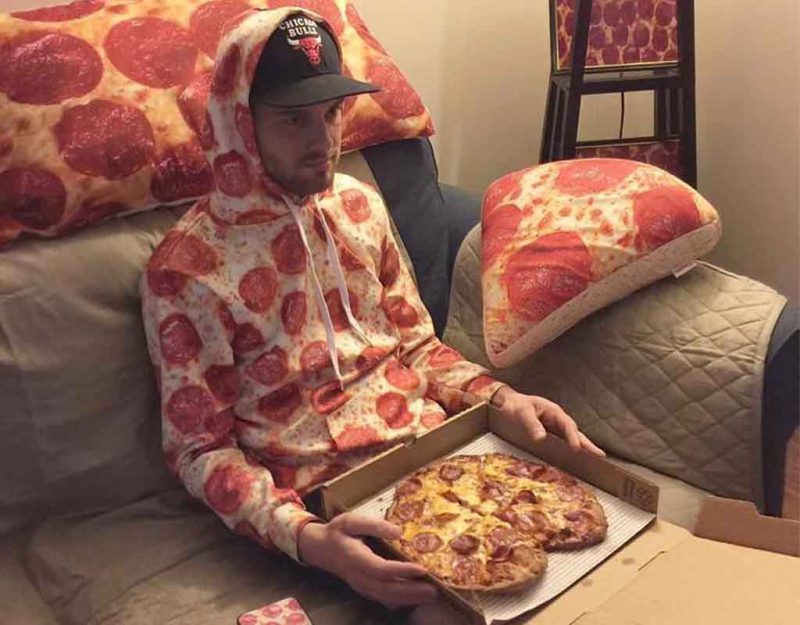 When I first read Laura Wood’s stunning and hilarious invective against pizza, it puzzled me with its extremity:

In the town were I live, there are as many pizzerias as gas stations and pizza is the gastronomic equivalent of Regular Unleaded. These outlets sell the exact same product, which arrives on the table with pools of grease shimmering on the surface like petroleum residue on the road. It’s the Fix-a-Flat of the gastro-intestinal system, akin to cotton wadding or foam insulation blown into crawl spaces.

Pizza has contributed to the quasi-destruction of the American body, to making us the fattest nation in the history of the world. Carbs kill, as a reader eloquently wrote in a previous post. Some people mistakenly believe pizza is relatively healthy because it’s not as fatty as meat. Pizza shops should team up with cardiologists and other medical specialists to offer package deals. Eat so many pizzas and get discount treatment in exchange.

There’s only three possible justifications for the existence of this nutritional simulacra. It’s cheap. It’s easy. And it’s fast. It all ends forlornly with a large greasy box that doesn’t fit in the trash. We don’t have to do anything to produce it. We don’t even have to cut it. We just have to pay for it and get rid of the box. Our passivity is complete. Pizza is enslaving.

Pizza, in the American formulation, exists as low-grade flour dough, sugar-added tomato sauce, cheese product, and toppings which can be mediocre because they are going to get blasted at eight hundred degrees and saturated in grease.

It might be the favorite food of corporate America, replacing the donut. You can get it for a meeting or inspirational event and satisfy everyone but the vegans, who are so hard to satisfy that everyone gives it a hard pass and adds a vegetable platter with soy-based “ranch dressing” to keep them quiet.

It makes the perfect product: bought in bulk, these ingredients are cheap. Flour is everywhere, and you do not need good flour for cardboard-like crusts. The cheese product is basically pressed cheese curd, and similarly appears cheap and abundant. The tomato sauce, adulterated with sugar to hide its burnt flavor, is highly acidic. The toppings usually consist of waste meat products pressed into sausage-like objects, or low-grade meat and vegetables which would otherwise go unsold at the store.

Even more, it makes the perfect consumption item. You fire up an app, select the usual, swipe a card, and thirty minutes (or less!) later the box arrives, at which point you wolf the stuff down and chuck out the leavings. Plates? Family dinner? Forget it. There is a reason stoners worldwide love pizza. It is lazy.

Like all other things, pizza represents a democratization, or lowering of standards so that everyone can participate, of food: instead of a sandwich with French bread, tomatoes, basil, aged cheeses, and deli meats, you can have a slab of fat and carbs with low-grade simulacra of the real thing.

At first, it seemed that Wood was taking an extremist position. Now, it seems like she identified a visible edge of a nasty trend in democracies, which is destroying the fine so that the mediocre can prevail, and then making it a required uniform of the good worker, like blue jeans or Leftist politics.

In modernity, all things are inverted. In order to democratize them, their essence must be destroyed so that they do not conflict with the limits of the audience. This creates an inverted product, or the opposite of what it purports to be, and kicks up profits and conformity at the same time.