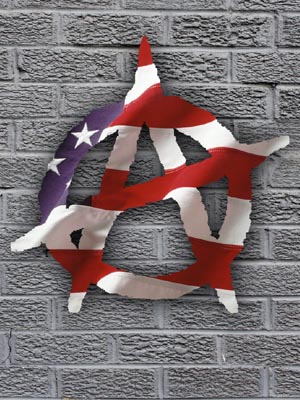 Imagine for a moment: Anarchists who are also Republicans.

They agree with anarchists that no government is needed. Instead, people make rules with a handshake and enforce them with social pressures.

These anarchist Republicans decide to move to a smallish city in Wisconsin and set up shop. There are no laws or government.

Instead, there is agreement on the following principles:

All of this is voluntary: those who agree to form this community agree to these rules. Those who stop agreeing are helped to move. Everyone else keeps living by these rules.

There is no government. Each citizen enforces these rules based on the idea that everyone agrees.

A modern day anarchist would find this to be really upsetting perhaps. It is people without government, living by “oppressive” rules. But these people agree on those rules: they see them as a trade-off. You can’t do some stuff, and in return, you get a more stable civilization.

Then again, a modern day Republican would have no problem with this. Conservative politics is about ideals and strategies (or methods) of adaptation to our reality. It does not require notions like government or no-government; it is just a series of common sense ideals that people can shake on and live together with, and live better than under any other set of rules.

This week, tell people you’re an Anarchist Republican. They’ll probably ask you where they can vote for that.