by Michael Llewellyn on November 3, 2009 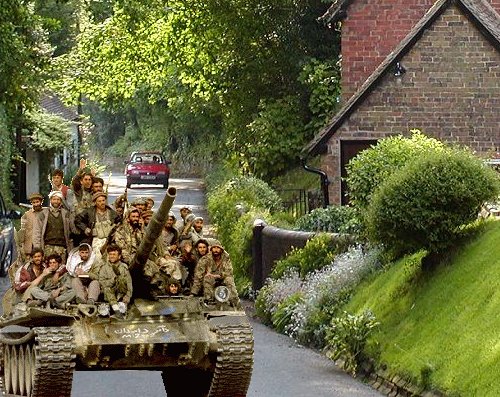 As the Near-Eastern Coalition occupation of the US and UK continues, AMERIKA.org travels to the front line of the War on Terror and discovers that whatever Iraqi and Afghan politicians might be saying, the conflict seems far from over.

Iâ€™d been assigned with several other reporters and journalists to a unit patrolling Yorkshire, England, a barbarous rural province that had seen some of the most brutal and desperate fighting since the invasion in 2001. Coalition armored vehicles, mainly from Iraq and Afghanistan, prefer to keep on the move through these deserted, cowshit covered streets.

Paranoia and fear are the dominant emotions while on patrol in these remote villages. Net-curtains twitch as routine patrols roll past, revealing the hostile ruddy-cheeked local yokels who may have concealed roadside bombs (known as IEDs) the night before.

Only last week near the village of Tweedon, I discovered that a lone Iraqi patrol had been ambushed by a group of disgruntled farmers aggravated by the previous dayâ€™s tank column taking a shortcut through their fields. A suicide-sheep laden with improvised explosives had run underneath their armored car, ripping its track off and stranding the patrol in a picturesque country lane. As the crew disembarked to replace the track, furious farmers emerged from the hedgerows and attacked the Iraqi servicemen with pitchforks and blunderbusses before making their escape in an old-fashioned bathtub with little wheels on it.

The President of Iraq, Saddam Hussein, commented recently that Yorkshireâ€™s brutal farmer fighters had been classified as illegal combatants and as such were not subject to the usual laws and regulations of warfare. But he made it clear that the Coalition would not be deterred from achieving their objectives by the minority of Western extremists.

â€œWe know that they believe they fight in the name of something or other, I donâ€™t know what exactly it seems quite vagueâ€ Mr Hussein told reporters on Monday, â€œbut they know that their totalitarian regime has totally collapsed. Only a bitter few insurgents still fight on because after regime change there is no place for the corrupt or the tyrannical in the West. Already weâ€™ve closed many schools, imprisoned celebrities and stopped the barbaric practice of women wearing little clothing in public.â€

Tariq, an 18 year old serviceman from Helmand Province, spoke to me yesterday during a lull in the fighting, â€œTo be honest, they usually seem too lazy to bother attacking us. By the time theyâ€™ve pulled themselves up from their sofas fifty armored troop transports could have driven by at 5mph and with broken tracks.â€

â€œA big problem is these fanatics in suits who run after us waving bits of paper for us to sign. We machinegun them usually, because they might have concealed weapons like a nail bomb in an i-phone or a knife inside a penlidâ€ he added.

Itâ€™s now several years since the scenes of mild chaos in London when Coalition forces pulled down a statue of Winston Churchill with a truck before dragging it through the streets while a handful of students and hipsters ran after the bronze likeness of Britainâ€™s famous wartime leader, limpwristedly swatting at it with rolled up copies of Razzle magazine and chanting rudimentary pop song lyrics.

And yet Coalition forces remain ensconced in both the US and UK, fighting for a cause that even the staunchest supporters of the conflict back at home now seem hard pressed to justify. Over 200 Iraqi military personnel have been killed since the conflict began, mostly from IEDs and suicide farm animals, but there is still little sign of real progress or hope of a withdrawal any time soon.

â€œIf these people were left to themselves, the country would quickly disintegrate into violent civil warâ€ one senior military commander told me, â€œor at the very least, some sort of interminable committee meeting, Iâ€™m not sure which would be worse.â€

As I gratefully left the barren, hilly Yorkshire landscape behind, I wondered if freedom would ever come to these simple downtrodden people, whose culture had centuries ago given so much to the world, but is now a reduced to a muddy war-torn graveyard, the stinky asshole of the planet.

Gaming: Just another barbituate | Progressive society is no less barbaric