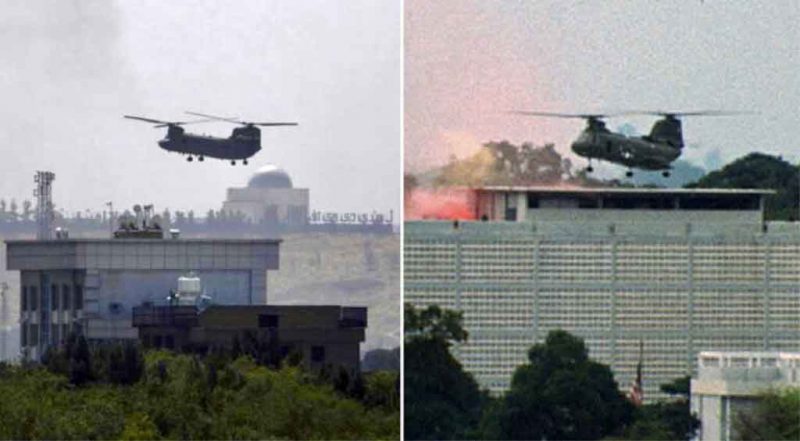 Normies clutch comforting concepts across America as they stare in shock at the screens. They see the evacuation of Kabul proceeding just as embarrassingly as the American retreat from Saigon, or even the clean up after the World Trade Center attacks back in 2001.

How could this be, they wonder. They took things at face value: just like it was important for American prestige to get the Mean Tweeter out of the White House, ending the Afghanistan War would bring about peace and happiness or some other silliness.

They never expected… this.

And yet someone with life experience and a functional brain would look at them and ask, “How else did you expect it to turn out?”

America had such a good run with spreading democracy in the world wars that it has tried to do it elsewhere, notably in Vietnam, Iraq, and Afghanistan. This has not worked so well because the local people not only have no experience with democracy, but no competence for it and no desire for it.

Come to think of it, is democracy even good for us? Our citizens are brainwashed and ragingly oblivious and stupid, yet we have to honor this because, you know… equality. Our public debate is as factless as it is airheaded.

Out there in middle America, we have bred a group of spoiled brats who thrive on righteous indignation. Their entire purpose to existence consists of denying reality so that they can feel erudite, enlightened, and generous. This is your Leftist herd and they are the biggest conformists in history.

These people really believe what they see on television simply because it is consistent with what they have seen previously, and it is “socially correct,” meaning that by denying reality and affirming the human vision of how things “should” be, repeating it makes you appear harmless, interesting, and popular.

I was talking with someone the other day who mentioned how horrible things were in South Africa. “Yep, that’s what diversity does,” I said.

Conversation stopped. The elephant in the room — the big obvious point of plain common sense fact and reason — could not be accepted. Something else must have gone wrong in South Africa, despite the obvious historical pattern where apartheid ended, diversity began, and then South Africa became a third world wasteland.

After all, that cannot be socially correct. Social correctness involves accepting everyone, loving everyone, and rejecting the nasty reality that says we have finite resources and limits to our time and energy, and need to make hard choices.

No, make no choices. Accept everyone. We are all one. We all mean well, and that should be enough. Don’t you feel it, man?

In the same way, with Afghanistan, the answer is to oppose war and believe that the equally reasonable Afghan people — who are just like us except that they were born there and not here — will come striding into peace, women’s rights, gay rights, civil rights, and the rainbow Age of Aquarius with the rest of us.

Instead, the 300,000 of them that we spent two decades arming and training dropped everything and fled when 70,000 Taliban appeared. Afghanistan could have won easily, but in the end, it simply did not desire democracy.

Among other things, Afghanistan remains an enigma because advanced countries keep treating Afghanistan as a country, when really it is an ongoing diversity war between different tribes and religions, and anyone who gets in the middle finds out just how duplicitous the place really is.

A good military leader could end the Afghanistan war in about a month. You have to behave on par with the Taliban: any village that does not fight the Taliban gets bombed flat. Soon you will have a few atrocities, but people taking you seriously.

The Afghans never took the Americans seriously, just like they never took the Brits or the Soviets seriously. To them, working for the new occupier was a job, and like your average office wage McSlave in Murka, they did what was convenient for them and blew off the rest.

If you were working for a large corporation, and suddenly you were under attack, what would you do? Would you die for an office job? To Afghans, tribe and family are real; religion is real. These abstractions like democracy and free markets are not real, but are phantoms of the Western mind.

The Afghans have it right on the most basic level. Democracy, capitalism, law, and morality are shared consensual hallucinations, not reality. They worked for us in America because our country took the hardiest people from Western Europe — Nordic-Germanics — and built an empire on it.

Democracy fooled these people and betrayed them. Once they had built a prosperous place, they thought, “Sure, let others come and enjoy our good fortune, just like the first Thanksgiving!” A short time later, they found out that the newcomers could vote, too, and they wanted free stuff paid for by the heritage Americans.

At this point, American democracy has converted itself entirely into a question of how much to steal from heritage America and how to redistribute it, using the magic of Keynesian economic theory to justify borrowing more than we can ever repay.

Even that is not real. It seems real, but that is only because we exist now in the pocket between an action and its consequences. You get a little free ride before the results, implications, secondary effects, and side effects come crashing down.

Democracy means dominance by social factors. Whatever is popular will be rewarded, so everyone in power — politicians, CEOs, celebrities, professors, activists — repeats exactly the same trope: everyone is equal, everyone is good, everyone is important. In fact, none of that is real.

We now see the consequence of having a population brainwashed by popularity. All the goodthinkers spend all of their time affirming the idea of democracy, which is equality itself. They will not accept any deviation from that.

Realizing that Afghanistan is not actually a suburb of Maryland, and the people there see things differently, have lower IQs, and have different abilities and preferences? That’s not sociable, so none of our citizens can mentally deal with it. Their brains short-circuit and they comfort shop.

Recognizing that since the dawn of time, diversity has meant nothing but loss of culture, prolonged race war, and tyrants taking over? Look at them blink and flap their arms in frustration. These words do not even compute, since they are inconsistent with the dogma of our time.

Around here, we write about reversed thought which occurs when you have an ideology, or symbolic belief system. People justify their desires and thoughts in terms of the dogma, and this means that they not only fail to notice reality, but actively push it away!

This means that we put ourselves deep into denial, and then occasionally experience one of these awful collisions with reality. It turns out that, despite the television saying that ending the war in Afghanistan would restore American prestige, there is no good way to abandon a colony.

Expect lots of murder. The Taliban seem savvy to the internet age, so they will hide it, but they are going to systematically remove anyone who stood against them. This is how things are done in Afghanistan, or any other diverse place.

Citzens of the USA are getting a rude wake-up call from reality, sort of like a high colonic of champagne and meth when the shooting starts. It turns out that the world was paying attention to our stolen election, and they surely are paying attention now. What do they see?

They see a spoiled brat, a bloated democracy unable to make sane decisions, ruled by voters who have made themselves idiotic in their pursuit of popular illusions, not realizing that things become popular because they cater to the wishful thinking of the sad many, not the wisdom of the happy few.

They see a country which now in Vietnam, Afghanistan, and Iraq seems to be displaying something other than the vaunted military prowess it displayed in the two world wars. In fact, the country seems hopelessly divided, as you would expect from a diverse state.

Now its famed Constitution has failed it, too; when you have an election in dispute, and your media, social media, and government work hand-in-hand to censor and suppress any mention of that fact, you no longer have a functional democracy. You have a one-party state.

Welcome to Third World USA. You got diverse, and now you are like the other diverse places on Earth. You have no culture except me-me-me first, and you have no future since no one can work together long enough to be productive.

Americans will not be so spoiled in the future. Their money will no longer be magic; their nation will no longer have prestige. No one will want to be an American now. America will join the other failed states in the third world, more of a warning about what not to do than a city on a hill.

As Plato would say, yet another place ruined by democracy and the illusion of equality. Your suffering will not be legendary; in fact, the main way you will suffer, Americans, is through being irrelevant. Another group of humans decided on suicide instead of doing socially-unpopular things.