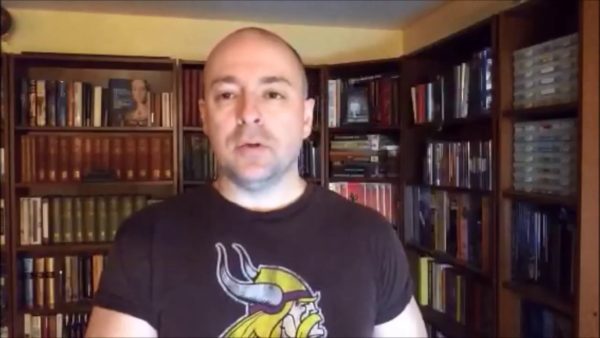 Alt Right ideas arose not together, but separately, and were melded only by the collective failure of the Left, mainstream Right and underground Right (“1488”) to address the problem of civilization decline. As a result, a new movement arose that wanted not just to beat back immediate threats, but to put Western Civilization back on track to greatness.

Since that thought is apparently both too abstract and too long-term for all but a few of us, the Alt Right finds itself surrounded by a miasma of confusion as people debate its meaning, even when that meaning is right in front of them. Witness, for example, Alt Lite superstar Fred Reed stumbling toward an understanding of the Alt Right:

For people who have better things to do than study abnormal psychology, the players are briefly as follows: Something called the Alt-Right that believes the white race to be superior and wants to rid the country of of encroaching dark scum.

For readers of this site, of course, that elicits a collective groan. Why? Mr. Reed has made the same mistake that The New York Times tends to make and for ideological reasons, likes to make: he has confused the Alt Right with white nationalism, despite the fact that the Alt Right was founded to get away from white nationalism to something more functional.

Because of this, he finds himself arguing from a Leftist position:

The Human Biodiversity movement, HBD, more scientific and less surly but picking whites while conceding that yellow are smarter. Finally IQists, who believe that IQ is a reliable measure of genetic intelligence. They too put yellows as more intelligent.

If we decide that all humans belong in the same society, then we should rank them by IQ and choose Asians as the masters of that society. Right? He misses the point of the Alt Right and nationalism: we do not care how smart they are, nor do we hate them like a white nationalist (spit) would. We care only that they are Other, and we need them gone so that we can nurture what is Us.

He is caught in the old “we have to make one world order for everyone” thinking, where the Alt Right has decentralized its thinking. We know that no order will work for everyone, and that we — Western Europeans, the genetic component of Western Civilization — must find our own path by excluding all Other, whether we like them or not (and most of us like some or many of them).

As a result, Mr. Reed is fighting a phantasm of his own mind, what the kids on in the internet call a “strawman.” The Alt Right he describes is not the Alt Right by any plausible definition, although all the Leftist newspapers like The New York Times really like his definition.

Since his precepts were erroneous, the rest of the article constitutes little more than error. As with most Alt Lite writers, Mr. Reed specializes in taking a simple concept and expanding it emotionally while condensing it intellectually, which makes his readers feel “in control” of the knowledge domain and therefore, content with their own wisdom vis-a-vis that of their peers.

Onward to the next logical contradiction and stumbling block of the Alt Lite, we find Vox Day, who as a Caucasian-Mexican-Amerind hybrid believes himself capable of offering ethnic commentary without retribution by the Leftist horde, probably hoping to follow in the footsteps of Dr. David A. Yeagley. He understands some of where Mr. Reed is wrong, but then compounds the error:

Unlike Fred, the Alt-Right understands that both average intelligence and the maximum elite intelligence are merely factors in the success of a society, factors that are heavily influenced by other cultural and genetic elements, such as Christianity, time expectations, and in-group trust.

Here we go again with the Alt Lite mantra: you can have your equality and democracy, just as long as you add in thinly-disguised racial preference. This is why Vox Day is more popular than this site; he offers you the mainstream lie, just in another form, so that you can believe this society will turn out fine with just a few little tweaks.

First, the idea that many people prefer something and therefore it is better is broken thinking and de facto democracy. On the contrary, what most people prefer is almost always a simplistic lie. What he has identified is the tendency of groups to prefer easy answers, and they find emigrating to the West far, far easier than fixing their own broken third-world societies.

Next, he wants to suggest that if we just become Christians, lower our time preference and become nationalist, all will work out fine. In other words, democracy is working smoothly, equality is still in effect, and there is no reason to change paradigm at all, because with these few self-help-ish suggestions, we can make our rotted modern society work.

This, too, is Alt Lite. Like the mainstream conservatives, they want to patch a leaky boat and present it to you as brand new, and this is very popular because it does not force people out of their comfort zones. They can keep watching television and eating chicken nuggets in oblivious contentment.

Just like the Republicans, he offers a simple enemy and a simple solution, and then ignores the reasons we got to this point in the first place. The Alt Right recognizes that The Enlightenment™ is bunk and therefore equality is bunk and we need to move on from democracy. The Alt Lite, like the GOP, refuses to acknowledge this at all.

Perhaps it is time to assert this dividing line even more ferociously. The Alt Right belongs to those who are no longer entranced by the illusion of equality; we recognize hierarchy and caste, and seek an escape from modernity entirely. The Alt Lite are sellers of cheeseburgers, telling us that we can fix up modernity with a few mods and everything will be fine.

Of course we cannot do that. Modernity is cursed by its basic ideas being paradoxical and therefore anti-realistic. We must move on from this dying time by ripping it out by the root, not trimming away a few symptoms and declaring the patient cured. If you wonder why the Alt Lite seems so easy and yet so unconvincing, these two examples should demonstrate why.