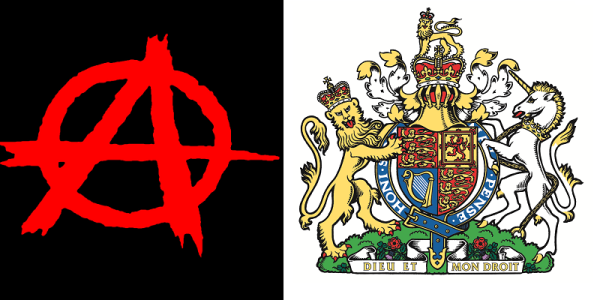 In AD 2015, government has failed. All of human innovation in politics since the middle ages has turned into a dysfunctional bureaucracy which borrows money it can never pay back, creates social chaos and worst of all, seems to endanger the best among us while letting the worst run unchecked.

I submit a modest proposal: this year, let us free ourselves from Society.

For too long we have suffered under the notion that Society can tell us what to do, for our best interests. The result is that all of us are forced into the same institutional programs that not only fail to achieve the results they intend, but create total havoc in their wake.

Instead, let us combine the best traditions of the past: anarchy, or total independence from the plans of others, and monarchy, or the tradition of picking our best leaders on the basis of their leadership ability alone.

Leadership is a complex thing. It shows up at every level of humanity and consists of the ability to make decisions intelligently while considering all that needs to be considered. Very few do it well, which is why most of human activity is disorganized and mediocre. To be a good leader, one must be able to balance many competing needs in the mind and to think of the long-term as well as the short-term. Bad leaders create rigid rules that are essentially knee-jerk reactions, but good leaders plan to bring out the best possible outcome and then keep improving on it incrementally through a process the Japanese call kaizen.

I propose a simple revolution in how we lead ourselves:

You will note that the above is not a system. Systems exist when we decide it is too hard to choose what is correct, or choose the best people to rule us, and so instead we set up a whole bunch of rules and procedures to do it for us. This makes the same mistake as those who confuse cruise control with an autopilot, in that systems help society keep the same pace but do not give it guidance.

This is more than even a change of government; it is an attitude shift toward the method of government. Instead of forced collaboration, it is willing cooperation, with those who can work together toward the good able to separate themselves from the rest. The rest must then take responsibility for their own futures and figure it out or perish. As human quality has plummeted during the past two centuries, this fixes that problem — yet another of the many that government cannot solve.

The real problem that we face in governing ourselves is that “systems” favor wishful thinking, or us deciding what “should” be true and voting for that instead of a realistic response. Realism requires us to both be aware of our world, and to have a goal other than the immediate, like an aspiration or transcendent purpose. Most people are afraid of that choice because it defines them by quality and ability, and there is no faking it. Good people choose good things in any of a million varieties, while bad people choose infinite variations of the same actual goals, which are always parasitic, perverse or deceptively predatory. These people deny life itself, and rage against it, desiring power so that they can alter in appearance the reality that offends them, and from that, conclude that they were right all along. This giant confirmation bias self-ratifying circle is what lies behind “progress,” which is the idea of pretending that reality is other than it is so that humans feel comfortable because they are no longer challenged to rise above what they are. “Progress” is a path to doom because in the process of denying appearances in reality, it also denies the inherent patterns of reality, and sets itself up for inevitable collision when those manifest in ways that conflict with progressive behavior.

What is most different about this modest proposal is that it does not center on method, or ways we can keep ourselves in line without purpose, but in the discovery of purpose. We do not need systems, dogmas, ideologies and symbolic victories. We need to concentrate on reality and the decisions we make within it, fully aware that doing so will force us to decide what we really want out of life and that this will separate us into different striations based on our degree of aspiration. And yet, this allows us to be free of the parasite of Society while encouraging the best among us so that our future is one of improvement, not “progress.”