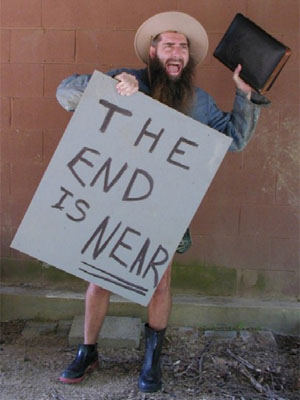 The tension is ramping up out there.

It’s not just that certain Mayan prophecies may have predicted this year as when the calendar ends. The numbers themselves have a sense of finality. We’re out of the first decade, and even out of the grace year that was 2011. We’re wondering: what now?

Few doubt that the 20th century was a spectacular mixed bag. We got all this advanced technology, and then all these horrible wars. But we finally ironed out the issue that had been festering since the French revolution, of nation-versus-nation-state. The nation states won — we think. For now.

The century culminated in an epic cold war that, with only nine years left, ended suddenly and to everyone’s surprise. In the midst of the celebrations, we noticed that the old modern bugbear had returned: what purpose did we have, without Hitler and Stalin to keep us on our toes?

We soldiered on. Soon a new purpose would arise. Soon things would change. But they did not; they only got worse. Consumerism got more vapid, culture more dead, even invading literature. Our politically correct society became a place where no opinion was safe, one in which only the pitied groups had power.

For a decade or so, we’ve been telling ourselves that the resumption of normalcy is just around the corner. But the tone of our decay keeps deepening. It turns out that if a man goes to a park with a sign that says THE END IS NEAR, one day he’ll be right, even if we don’t want it to be so.

Before us stretches a long line of generations, with things starting to get dicey about the mid-19th century. That was when the lessons of 1789, acted on at the end of the 18th century, came to bear. The United States opened its doors to all types of Europeans. Europe relaxed as well.

In the mid-19th century, these new groups found they had little in common. As a result, we fought wars over symbolic issues. The North had more slaves than the South in the American Civil War, and they treated them worse. Who remembers? The point is that one side wanted control and found a justification.

As that century wound down, Europe was wracked with a series of wars for national sovreignty and for groups of nations, roped together into nation states and demi-empires, to gain regional control. These were just practice for the Great War and since that wasn’t suicidal enough, WWII.

Since then, we have become a society with one finger planted firmly on the fast-forward button. We threw out all the old values of culture, religion, honor, loyalty, pride and hard-won knowledge. Now it’s all about us as individuals. This peaked with the 1968 generation, or “Baby Boomers.”

Their goal was simple: take it all, and give nothing back. They achieved this because they rode a wave of post-WWII wealth, aided by technology, which has no compare at any time in history — save the dying years of the Roman Empire. The Boomers made themselves rich and left their kids a wasteland.

This is because the Boomers got rich by being merchants. They specialized in flattery, committee meetings, snappy slogans and catch jingles, and the like. This was the “How to Win Friends and Influence People” generation, a cadre of born manipulators.

As a result of their ability to be good marketers, they denied reality. They went full-liberal. Rights for everyone, and let’s import voters from places that have no resemblance to our heritage. Destroy anything that is not about Me and me alone, said the Me generation.

Now we look at America and Europe and the picture is unenthusiastic. Jobs are misery, daily life is drudgery, and any belief that might inspire us is quickly quashed because it’s unsociable. Parasites thrive and so simple everyday tasks — which technology should have made a snap — have become arduous.

You can feel the exhaustion everywhere. No wonder the Iranians and Chinese laugh us off. They sense that we’re fat because we’re tired, and we’re tired because our lives are purposeless and no amount of mountain-climbing, object-buying or vacation adventures can shrug that off. We eat to stay awake.

2012 has come on us suddenly. For a while we thought that maybe the new century would just carry over the easy living of the late 1990s. But then, a convergence of failures based in illusions we acted on in the past. Markets based on catchy jingles and snappy slogans collapsed. Democracy was dysfunctional. Politics continued to be lies and more lies, with the least offensive lie winning the race.

Now we face our greatest fears. Instead of facing certain doom as we did last century, we face a future of non-events, of non-work and non-reasons, of non-truths and non-pleasures. We are bored, run down, burnt out and listless. The apocalypse is our mood, not our world. And we are condemned to live it.