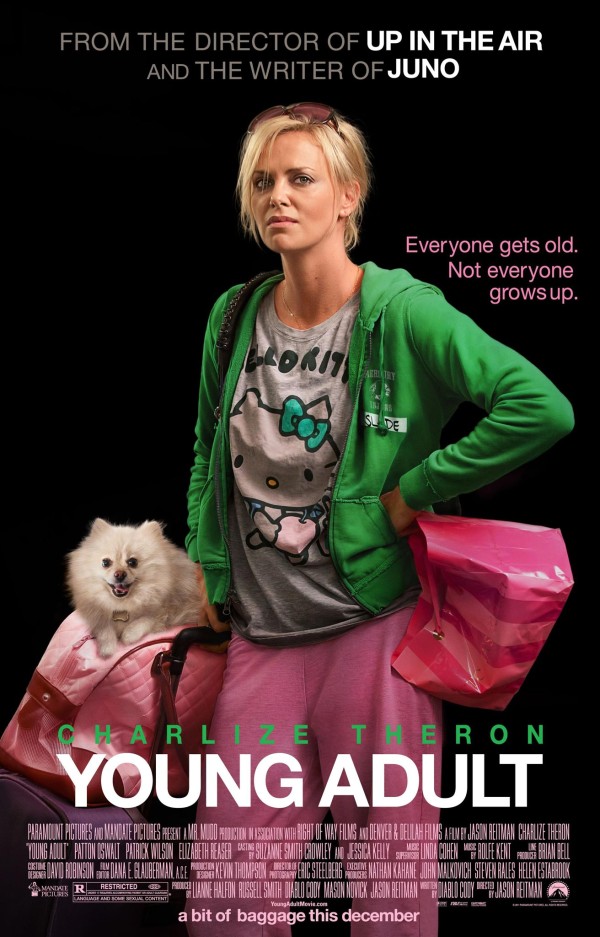 The one-time-stripper turned pseudo-Catholic Diablo Cody, screenwriter of the surprise hit anti-abortion indie flick Juno, returned to the big screen with Young Adult in 2011. Its lukewarm reception was likely due to the public not being ready for a film that so blatantly plays out the epic failure of feminism and female solipsism.

The film’s unlikable, narcissistic anti-hero, Mavis Gary, is a successful (by small-town standards) Young Adult fiction writer who uses characters and plot lines in her books to re-live her own real life high school prom queen memories. Still quite beautiful, although lacking in the romantic department after a failed marriage and, at 37, visibly aging, she remains defiantly convinced that she is the Queen of All.

At the beginning of the film, Mavis receives an e-mail from her high school flame Buddy Slade announcing that his first daughter has been born. Mavis is completely distraught but plays off to a friend that â€œshe [Mavis] has a life,â€ â€œhe is trapped with a wife and kids,â€ and â€œthey are so lucky that they got out.â€ All of this despite living a loveless â€œcock carouselâ€ lifestyle in which she lives alone in a filthy apartment wearing sweatpants and satiating herself with whiskey, Wii and trashy reality television. After gazing longingly at the photo of Buddyâ€™s baby, she is determined to prove that she is the success story while all the people who chose to stay in her small town and raise families are suffering. She is a woman on a mission to prove that she is superior and fulfilled.

While on this delusional power trip, she decides she needs to win back the attention of her old flame, despite the fact that he is a clearly devoted new father and husband. Her psychopathic revenge fantasy is laid out for the audience and obvious to the characters around her. Eventually, everyone except for her realizes how unhappy and mentally ill she really is. She, however, remains convinced that they are boring, predictable and unfulfilled. The desperation comes to a climax when she attends the rock concert of Buddyâ€™s new wifeâ€™s cover band. He is captivated by the band while Mavis pathetically recalls to him the first time she went down on him, completely oblivious to his lack of interest and perhaps disgust in her desperation to relive their past. When this tactic fails, the shot zooms in on Buddyâ€™s wife’s seeming ecstasy in her musical performance. It becomes obvious that she is totally happy, fulfilled, and in love with her husband and new child. All our protagonist has left is resentment and a â€œhipâ€ solitary apartment in a â€œcoolâ€ atomized city.

Being â€œindependently successfulâ€ and self-reliant while waxing and preening religiously to â€œstay youngâ€ (as our protagonist does periodically throughout the story) may not be all that is necessary for fulfillment. In the end, these things may only be suitable for bragging rights and regret which comes too late. This movie succeeds in expressing an unpopular opinion which could keep most 20- and 30-somethings up at night. Someone who has built their whole life on this individualist â€œsuccessâ€ ethos and an aimless self-serving existence, foregoing a traditional family unit, encounters the realization of the emptiness of this life too late, and they have no choice but to cling to the failed fantasy as it slowly drives them into insanity.