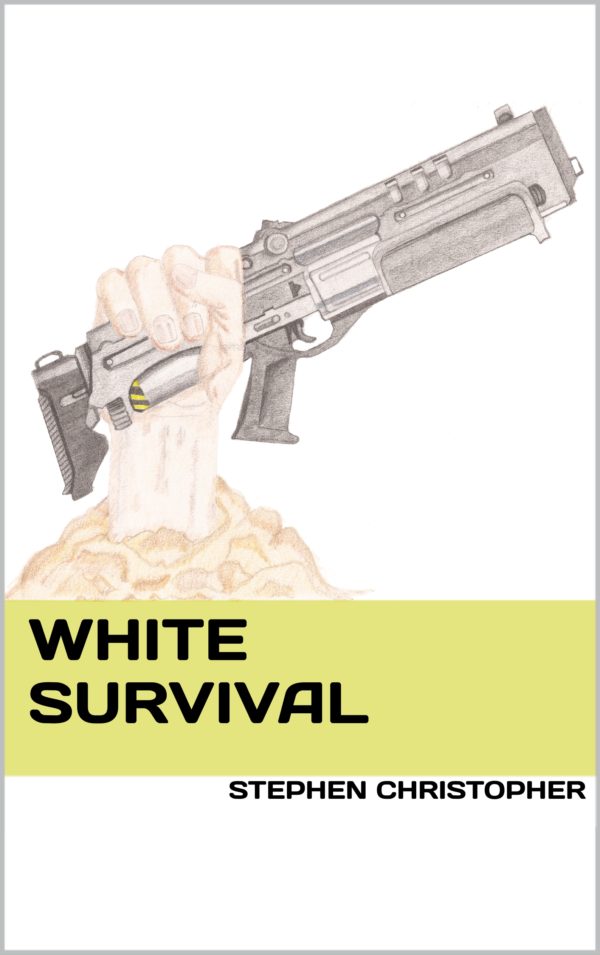 The quest to create nationalist fiction remains elusive because, after traditionalist and realist sentiment dominated literature for the first half of the last century, control and financial power in literature were handed over to the Left. The result has now bottomed out because it repeats empty distractions and so has no meat, and therefore produces no great literature, only novelty.

What this means is that the writers on the Right face a unique challenge, which is how to express themselves clearly and yet avoid falling into the Leftist trap of echoing dogma, which removes the ambiguity and conflict that is at the core of every great work. Stephen Christopher steps up with White Survival, a science fiction novella designed to both provoke and explore the conflict inherent to attempting to have hope in a time of civilization decline.

The plot involves a group of white people who, dismayed at the fall of the West and the seemingly pathological desire to exterminate white genetics of the “new” population, create a cryogenic facility that will enable them to re-awaken several centuries later to restart a world of European-descended people.

What they discover is the raw animal nature of this pathology, finding it rooted not in religion or ethnicity per se but through the natural conflict between populations, which is reframed in a biological context instead of the political. If this book has one compelling feature, it is this tendency to skip the entire political structure of the West and focus on the underpinning biological reasoning.

In addition, White Survival puts into visual and metaphorical form the sensations the alert people experience now as they watch the trainwreck of the West while everyone else runs screaming into denial:

She looked at me with fright in her eyes and tried to loose my grasp. But I held her firmly. I tried to explain to her what I had seen, what was going to happen to this place, to us. She began to panic. She struck me on the arm and chest with her free hand, dropping her phone on the path, screaming for help. I grabbed her other arm, trying to pacify her. I looked into her eyes, told her it would be OK. I told her there was a place for her with us, a place underground, safe, away from the hell that would soon befall us.

She became hysterical, started kicking out at me and trying to pull herself away. I lessened my grip, and she fell to her knees on the footpath, dirt sullying her clothes. Immediately she scrambled to her feet and ran away. I could hear her crying as she went. I watched her go, not attempting to follow her.

Another one not worth saving… (88)

While on the surface this is a science fiction book about the future, thematically it describes our present state of mind: witnessing a collapse of Western Civilization and the genocidal intentions of most of our people toward themselves. Its goal is not so much political diagnosis, but using the lens of history applied in the science fiction genre, looking toward a cure for the soul-illness that causes civilizations to suicide.

The prose is brisk and sparse, told in first person through a fairly reliable everyman narrator who describes long-term concerns as immediate because, once having been made aware of them, he cannot deny them any longer. While the book does not focus too much on the collapse denialism of the present time, it does illustrate the fatalistic mindset found in most people: a lack of will to survive, like a biological entity aware of the need to adapt and reproduce.

This heavy Darwinistic outlook places this book in good company with other lone remnant stories like Battlestar Galactica and Pandorum, as well as classic science fiction like The Martian Chronicles. In this case, an explicitly racial filter is placed on the story, which seems more honest since each group represents only itself and cannot honestly speak for others.

When the book does speak of a theory of politics, it is tied to biological survival and aims for a bigger, wider picture than contemporary politics can deliver:

Instead the population was made to believe that all this deterioration was â€˜progressâ€™. That impoverishment was really â€˜enrichmentâ€™. That genocide was â€˜diversityâ€™. That sin was virtue. That a religion of violence was a â€˜religion of peaceâ€™. That patriotism was sedition. That love was hate. That good was evil and that evil was good. The anti-whites had a habit of calling everything the opposite of what it was, including themselves (â€˜liberalsâ€™, â€˜anti-racistsâ€™ etc.). It was another incredibly simple tactic that had depressingly effective results on your average white man and woman.

Thus most of the citizenry dutifully kept their heads down, saying and doing nothing about the invasion. They lied to themselves that it wasn’t really a problem, or that somehow it would all magically be fixed by someone else â€“ most likely by someone they themselves would denounce as a â€˜racistâ€™ whenever they broached the subject. In short, they did as the masses have always done: as they’re told. (14-15)

White Survival offers a fun, quick read with the briefest of political offerings dispatched before it heads straight into post-dystopian science fiction. In addition, it offers up an interesting new world, including a type of enemy warrior born of technology that is so terrifying it might even shock awake the most bourgeois of us in the middle of the night.

Where this book strides ahead is in its ability to frame a ground for future literature of this type, melding the biological and the historical and skipping over the present day issues for the most part, which gives people a direction and a reason to fight for it before we get to the horrors described in this adventure.

Living In A Dying Age | Origins Of The Alt Right