The Science of Getting Rich by Wallace D. Wattles

The Science of Getting Rich: Financial Success Through Creative Thought
by Wallace D. Wattles
79 pages, Barnes and Noble, $7 (or free online) 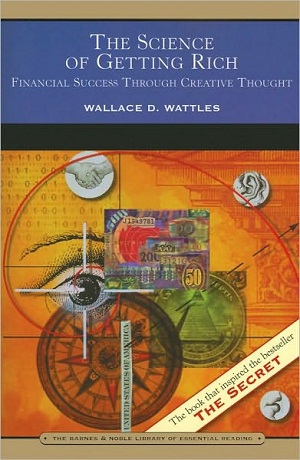 This book may be useful to anyone contemplating a desired change in the world when the odds seem stacked against it.

Although most will file this in the “self-help” category, and it belongs there as well, the fundamental topic of this book is transcendental/hermetic thought, namely the use of positive visualization to enact laws of attraction to realize abstract goals.

Like most ideas derived from Vedic thought, the contents of this book apply in any religious tradition, although the author seems most familiar with a Western Protestant approach.

Wattles bases his theory in a monistic understanding of the universe which suggests it is a semi-conscious, almost pantheistic entity, which expresses itself through living things and can be directed by conscious minds such as those humans possess.

Although this may sound simplistic to our reductionist-tuned ears, this concept is not far from some of the ideas expressed by our physicists, in which observers influence the outcome of events, from Heisenberg onward.

He compares this principle to algebra, and claims that the world tends toward abundance and not poverty, and that poverty only comes about through a failure to follow this principle. In his view, all can be wealthy, but they must not only apply themselves, but discipline the monistic force so that it brings benefit to them.

Use your mind to form a mental image of what you want, and to hold that vision with faith and purpose, and use your will to keep your mind working in the Right Way.

The more steady and continuous your faith and purpose, the more rapidly you will get rich, because you will make only positive impressions upon Substance; and you will not neutralize or offset them by negative impressions. (39)

While this sounds New Age-y, it has far older roots, and is echoed through many of the traditional writings: the world is formless “Substance” that wants to evolve toward higher levels of consciousness and order, and those who are willing to help guide it there reap its material rewards. In Wattles’ view, the essential exercise is to shape the will to visualize what is desired and not to visualize what is not desired, as if sending a message into the aether requesting aid.

The action and thought in getting rich is fully explained in the preceding chapters; your faith and purpose positively impress your vision upon Formless Substance, which has the same desire for more life that you have, and this vision, received from you, sets all the creative forces at work in and through their regular channels of action, but directed at you.

That is the crucial point in getting rich; right here, where personal thought and action must be combined. There are very many people who, consciously or unconsciously, set the creative forces in action by the strength and persistence of their desires, but who remain poor because they do not provide for the reception of thing they want when it comes. (51)

These are the stages of this method of thought: visualize a positive outcome, remove negative visualization, be receptive to the resulting opportunity, and finally, be efficient in specific tasks toward this goal. For Wattles, the difference between efficient and inefficient action determines the supremacy of the will.

For a cynic’s perspective, if we remove all metaphysics, this method makes sense as a form of mental organization: figure out a plan, ignore obstacles, and work toward it through systematic, effective achievement of steps toward that goal. While Wattles merges Western transcendentalism, Continental idealism and frontier Christianity to express this notion, nothing of what he says cannot be interpreted as practical psychological advice.

Using terminology that might be familiar to a medieval alchemist, Wattles summarizes his view with this mantra:

There is a thinking stuff from which all things are made, and which, in its original state, permeates, penetrates and fills the interspaces of the universe.

A thought, in this substance, produces the thing that is imaged by that thought.

Man can form things in his thought, and, by impressing his thought upon Formless Substance, can cause the thing he thinks about to be created.

In order to do this, man must pass from the competitive to the creative mind, he must form a clear mental picture of the things he wants, and do, with faith and purpose, all that can be done each day, doing each separate thing in an efficient manner.(59)

Toward the end of the work he adds this mystical rejoinder:

The men and women who practice the foregoing instructions will certainly get rich; and the riches they receive will be in exact proportion to the definiteness of their vision, the fixity of their purpose, the steadiness of their faith, and the depth of their gratitude. (79)

This book is fascinating from the perspective of anyone attempting a brave or unlikely success. While the author addresses wealth specifically, he uses the first chapter to define wealth as a means to the end of happiness by intimating, much as Socrates did in The Republic, that without wealth certain vital tasks cannot be accomplished. He intends his principles to be extrapolated from specific tangible wealth to the broader task of accomplishment in life.

As one of the founding gurus of New Thought, Wattles attracted many people toward this somewhat hermetic principle of visualization and corresponding action, and became a controversial religious figure for his endorsement of monism in a time when dualism (a God external to our world imposes His will upon it in moral judgment) was the trend. That this book not only survived but remains popular today suggests how profoundly a revolution toward the occult traditions of the West simmers underneath a surface of exoteric religion and politics.

What makes this book endure is the simplicity of its style. The author distills religion to a half-page of metaphysical principles, and although he asserts that the dead may walk among us and other realms may exist, he makes this tangential to his ideas (47). His focus is on making the metaphysical and the physical converge.

In a time when Ayn Rand regains popularity, it might be useful to go back to Wattles, who could easily be her inspiration, albeit a kinder, gentler one. In his view, there is no point forsaking wealth out of deference to the poor; what the poor need, Wattles thinks, is inspiration and the knowledge that all can become wealthy if they apply a will to that end (42).

Through this method, Wattles provides a kinder and gentler version of Social Darwinism. The world, he says, is forever willing to make us prosper, and to help us realize our ideas if they complement the metaphysical universe with a more complex or more beautiful order; our only task, then, is to focus our will and with scientific precision, harvest the results.

Whether or not you believe the metaphysics, or the possibility of all being wealthy (a denial of the zero-sum nature many see in economics), the message is an inspiring and practical take on how motivated humans can overcome incredible odds to change their world. For all of us attempting to reverse what seems like an overwhelming landslide of decay, this is a vital point indeed.

Slutwalk Congo | We are the future