This book caught my eye because it contains some of the most insightful and honest critique of multiculturalism I have ever read. On the other hand, its “solution” is to remove culture from the picture entirely, which is so brain-dead I have trouble respecting the book. 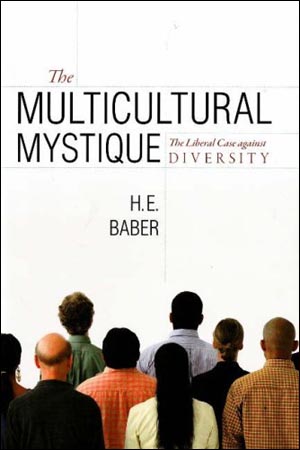 Onward to the good, however: this book gives us a working definition of each type of multiculturalism, albeit with hokey postmodern-style metaphors. The kind the author rails against is “salad bowl” multiculturalism, where members of different ethnic groups move to a new land and then stay segregated by ethnicity. The kind the author endorses is assimilation, or everyone giving up on their source culture and joining the new culture. Difficulty: the author admits that such a culture doesn’t exist, and just about goes far enough to admit that diversity kills it, but then launches on a praiseful tirade in favor of individualism and having no higher cultural goals.

The justification used for this course of action comes right out of the early 1990s. Baber distinguishes between “salient,” or components of our social identity, and non-salient attributes to individuals, like ethnicity. No attempt is made to address populations as organic wholes; in fact, that heresy against deconstruction is considered outside the realm of intelligent discourse. Her point is that majority cultures like indigenous whites in Europe and America do not have to notice their race (you can find this sentiment in any publication on “white privilege”) but that anyone else must.

For white Americans, ethnic identification is largely a matter of choice, since whiteness in the United States and Europe is nonsalient and, as it were, transparent. This is, indeed, the fundamental characteristic of “white privilege”: to be white is, in an important sense, to lack racial identity, to be “just regular” as regards race. (10)

At this point, her liberal thinking takes a turn toward the semi-Randian. Having expectations of culture imposed upon you, she says, limits your ability to be individualistic and to make individualistic choices because your ethnic group will enforce them upon you and if they don’t, society at large will project them on you. She uses delightful examples like overachieving black kids getting dinged for “acting white,” or clueless white people politely asking random black people to explain Kwanzaa.

However, ultimately her solution is a dumbed-down modern form of colonialism: import the people to your country, integrate them into your culture, and in a few generations they will have lost whatever origins they had. It is colonial because as she frequency points out, non-majority-ish populations get imported as cheap labor, with the hope and guess that they will depart when the wages go:

The worry that mass immigration will make receiving countries “too diverse” or that it will “thin out” their cultures is a sham. The fear is that immigrants will not remain sufficiently “diverse” to accept second-class jobs, do harsh jobs for low pay, and conveniently disappear when their labor is not needed. (233)

This passage shows the book in microcosm: insightful analysis that reveals the attitudes of Americans toward their imported diverse labor pool, coupled with editorializing that considers a few out of the many factors and plays fast and loose with the concept of ethnicity in contrast to culture.

Profundity and the same old boilerplate wrapped together in an easy package? It’s kind of like honor students who own that one Iron Maiden album so they can, you know, let loose and walk on the wild side every tenth Saturday night. If you write for the liberal establishment, you have to smother any dose of shock with a heaping helping of familiar territory.

The relevant moral questions are: to what extent does the cultural self-affirmation of some members of a group have consequences for other members of the group and are those consequences so significant as to override rights to free speech, religious freedom, and self-expression? These rights are not absolute. (165)

Baber hones in on the central issue of modern time, which is whether our individualism is absolute, and comes down in favor of the absolute — without presenting an argument for it. Assumptions exist, and personal histories, but we’re not seeing a cause-effect reason for these assumptions. However, the question needed to be asked, and it’s better in print from a liberal source than from a conservative one which would immediately be dismissed by anyone left of center.

In this chapter, I also address the important question, rarely discussed, of when, if ever, ethnic diversity ends. Do multiculturalists imagine that the salad bowl is forever and that ethnic minorities will maintain distinct cultural identities in perpetuity without coalescing? It is hard to see how such an arrangement could be maintained without the establishment of a virtual millet system of semiautonomous communities maintaining their own schools, institutions, and, perhaps, systems of personal law with the approval and support of the state. (11)

These are very important questions. Baber does not ask what happens when the “majority” population the United States and Europe is in fact worldwide a minority population, and a wealthy one, which means that many more of them want to move here than there are members of the “majority” group. Do they get bred out? Do they have a right to exist as well? You won’t find that in this book.

The Multicultural Mystique may be fun because it is such a mixed bag. Baber brings up the important issues; she then explains them away with stock-in-trade liberal platitudes. Because the liberal modus operandi is to take an individualist position, and passive aggressively react to any assertion of a different viewpoint as if it were straight out of a hostile nation’s propaganda broadcast, she does what most political writers tend to do, which is cherry-pick sources. Why consider multiple factors, when there’s one you need? Why mention the breadth of an issue, when you can take data out of context and imply its relevance? A good deal of the arguments in this book conclude with her asserting an example that might support them, and as if that proof were evident, ending the paragraph.

In style, the book resembles much of the other popular literature from our philosophy departments. Its strength is that it makes its points clearly; its weakness is that it deconstructs so much that the entire document is not a strawman attack, but a strawman discussion, with theoretical beings existing in vacuums without time, place or context batting each other around using absolute concepts like individual rights. Much of it reeks of a lonely white woman alone in a Starbuck’s, writing from a stack of The Atlantic magazines and what she can find with Google, and not bothering to edit for circularity. Around we go again and again; fifty to a hundred pages could have dropped from this book with no loss in meaning.

For all of its faults and biases, however, The Multicultural Mystique won me over because it kicks open the door on several important issues: Assimilate or respect culture? We know this path will destroy culture and replace it with individual desire, right? No one is thinking past the immediate; most people who support diversity do so for low-cost lawn care and social identity points. And last but not least, what is the goal here? Do we want culture, or not, and if not, why? Many of these questions arise from the reading of the book and are not embedded in it, which makes it doubly impressive as a conversation starter.

Your average person will not find this book compelling because it is, without exception, and indulgently so, written in the “philosophical” style of lots of flavor-words for concepts, plenty of comma-separated phrases, with allusions to terms trending in academia. However, for those who are interested in this issue which since 1865 has dominated American and European politics, The Multicultural Mystique provides a good place to start your open-minded research by seeing what the best of the liberal side have to say.

You can find this book on Amazon for $27.

Sex and violence | Spread too thin