Suicide of a Superpower by Patrick J. Buchanan 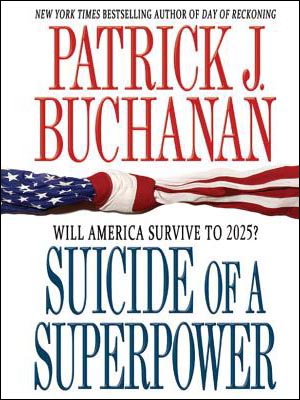 Some books exist to comment on trends and to show us the richness of events unfolding before us. Other books come out of the cold with a singular mission, which is to find a pattern — connecting the dots — between all these trends and then to use that to kick open a door to a new level of discourse. Buchanan’s latest is the latter, and it must be read on two levels.

Its first level addresses the concern leveled by its title: is the USA, like Rome and Greece before it, in decline as an empire (sorry, “superpower”)? If so, what are the symptoms, then what is the underlying cause, and finally, how do we fix it? Buchanan addresses this with Reagan-era political pragmatism and a hint toward the subtext of this massive inspection of the cracks in the American facade.

The second level on which this book lives is a covert, subversive idea, which is that we took a wrong turn at the start of the last century. All that’s old is new again, and that means politics as understood to be “eternal” in the same way the emotions that characters face in Shakespearean plays are eternal. Eternal politics includes nationalism and the idea that a nation is defined by the unity of its heritage, beliefs, customs, values, language and culture.

But there’s the rub. As Buchanan devotes several hundred pages to explaining through remedial history (which is necessary, since they haven’t taught history in any meaningful way since the 1920s), the last century has been dedicated to kicking eternal politics to the curb. Patriotism and the “proposition nation” (really: proposition nation-state) have replaced unity, acceptance has replaced standards, and political correctness has replaced having a purpose. No wonder the empire is creaking from within.

The audience for this book is presumably the average American conservative, who is 75% likely to be European-descended and at least friendly to religion. Buchanan’s surface thesis (the first level) is that America is in decline because we no longer have any “glue” to hold our society together. This addresses the questions that your average conservative is going to have as we watch the liberal entitlement state collapse, and our “new” voters elect Barack Obama, our least qualified president.

Long before him, the Italian philosopher Vilfredo Pareto wrote that equality “is related to the direct interests of individuals who are bent on escaping certain inequalities not in their favor, and setting up new inequalities that will be in their favor, the latter being their chief concern.

Cui bono? — Who benefits — is ever the relevant question. When a new class advances preaching the gospel of equality, who gets the power? (225)

Buchanan is careful to be gentle with the average conservative reader. As someone who has studied history and watched recent American developments explode out from under a once-stable society, he is aware of both the vastness of the threat that America faces, and the broader challenge of a lack of values in common in the West. He does not explicitly blame the French Revolution for a worldwide revolution in liberalism, but uses the post-1968 version as a type of metaphor for all liberal revolutions, drawing parallels to Russia and France.

For readers who are accustomed to the denser tomes from academia or philosophy, this book will seem a bit “bready.” Buchanan obeys the media rule, which is to tell people what they’re going to hear, tell them, then give them three examples and explain how each is an instance of the subject, and then tell them what they heard. This gives the book a steady but slightly languid pace, like a summer afternoon under rain, but he accelerates the heart rate with some of his more apocalyptic visions, which artfully accelerate as the book progresses.

Unlike most political books, Suicide of a Superpower is not about cheering for the red team over the blue team. Similar to Anne Coulter’s Demonic, this book uses the current threats to America to talk about the fundamental problem of liberalism, which is that its mania for equality is divisive. Buchanan extends this by showing us how a healthy society will have unity of religion, values and heritage, and how each of those are under assault for us.

In order to avoid being slandered as a bigot — a strategy which did not work — Buchanan first talks extensively about Christianity as a lynchpin of American society. The only possible objection here for people who are not Christian-haters is that the problem is not a lack of religion, but a lack of agreement between citizens in the three major areas he targets in the book. For readers who dislike Christianity, this section is a bit of a squirmer but can easily be skimmed once you realize religion is a surrogate expression for the utter lack of values in common between Americans.

Since the internet is full of smug Europeans who like to talk disparagingly about “Americanization,” it is worth mentioning that Buchanan carefully illustrates between the lines how liberalism is Americanization, globalism, conformity, political correctness and social breakdown. As he demonstrates with frequent invective against the values of the Baby Boomer leftist revolution, the demands for civil rights, atheism, multiculturalism and the entitlement-welfare-Nanny State are byproducts of the liberal mania for the equality of judgment over all of its citizens. Simply put, liberalism opposes a single standard of reality or values, and so creates a disintegrating society that can only be held together by strong commerce, a police state, and millions of Nanny State bureaucrats trying to keep us all in line.

It is worth reading this book in conjunction with Samuel Huntington’s The Clash of Civilizations because these two books are clamshells around the era of liberal power. The 20th century was an experiment in liberalism inspired by the revolution of 1789 in France, and this experimented culminated in globalism, which now has proven itself as unstable as communism and so we are reverting to the ways that served us well before this detour: nationalism, unity, spirituality and conservatism. The essential idea of liberalism is that we have as many directions as there are people, but this permits no winning strategy for governance — or getting elected.

In 2008, black and Jewish voters each gave McCain just one percent of his vote. Why then the GOP obsession with African American voters who went 24-1 for Obama, but are outnumbered by white voters 6-1? Why does the GOP spend so much time courting Jewish voters, who are outnumbered by Catholic voters 13-1 and by Protestant voters 25-1?…You go hunting where the ducks are, said Barry Goldwater. As whites remain three-fourths of the electorate and Christians four-fifths, this is where the GOP will find victory or defeat. (346)

America and Europe are in the grips of economic liberals and cultural Marxists who are behind the times and still clinging to the spectrum of leftist belief which at 222 years is showing not only its age, but its utter dysfunction. In denial of this obvious truth, the liberal elites in America and Europe are tightening their grip as their “ideological” policies hasten decay. Buchanan’s book exists not to stave off a disaster that he repeatedly hints is already upon us, but to prepare us for what we must do to rebuild.