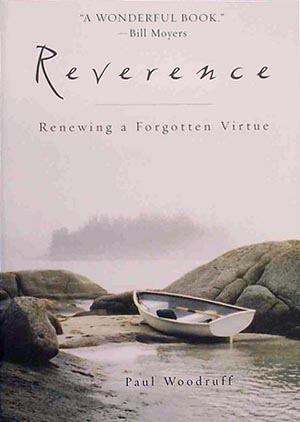 This little book wins people over because of its simplicity not its rhetorical fireworks or intricate arguments. When you think about it, distilling a simple truth out of a complex situation is either supremely difficult, or strikingly dishonest.

In this case, I believe, it’s the former. Reverence is “the virtue that keeps human beings from trying to act like gods,” says Woodruff, and we’ve forgotten it. That jives with what I know of people arrogantly acting as if their own needs are all-important, their opinions are fact, their science and statistics are more important than observation and, most of all, that we’re all equal and better toe the line and not offend anyone — or else.

All of these things originate in what Woodruff describes as the irreverent outlook, where we believe that our emotions, socially-defined conclusions, social status and shared memes somehow trump ultimate reality itself. In short, we’ve made ourselves gods and replaced paying attention to reality with solipsistically paying attention to ourselves.

Nietzsche pointed out how humanism leads to solipsism that denies all that’s good in life so we can avoid conflict, and get along like good equal social animals, nevermind that we’ve traded the future for temporarily stability today:

And when it is all over with the human intellect, nothing will have happened. For this intellect has no additional mission which would lead it beyond human life. Rather, it is human, and only its possessor and begetter takes it so solemnly — as though the world’s axis turned within it. But if we could communicate with a gnat, we would learn that he likewise flies through the air with the same solemnity, that he feels the flying center of the universe within himself. There is nothing so reprehensible and unimportant in nature that it would not immediately swell up like a balloon at the slightest puff of this power of knowing. And just as every porter wants to have an admirer, so even the proudest of men, the philosopher, supposes that he sees on all sides the eyes of the universe telescopically focused upon his action and thought.

On truth and lies in an extra-moral sense, by F.W. Nietzsche

In Woodruff’s view, the human tendency to view human commentary on the world as inherent truth is diametrically opposed to a transcendent worldview, in which we place ourselves mentally as small parts of a big world, and pay attention to how it works and adapt ourselves to it.

Through this transcendence, he reasons, we can interpret any belief system in the correct context, and assess any fact or reason in context, giving us the ultimate simple tool for finding a realistic solution or way of life.

Even more, as he argues in plain “psychologist speak” with a heavy dose of literary and philosophical references, we learn to appreciate ourselves again by not taking on an insane burden of the world but by seeing it as the magnificent, complex system it is and alleviating our feelings of the necessity of moral judgment.

Reverence doesn’t tell us what is right and wrong. It is instead the ultimate meta-level thought, telling us how to think about how we think about right and wrong. Although it will not grab headlines, this simple thought-virus is profound enough to make this book recommended reading for those in any discipline, religion, ideology or stage of life.