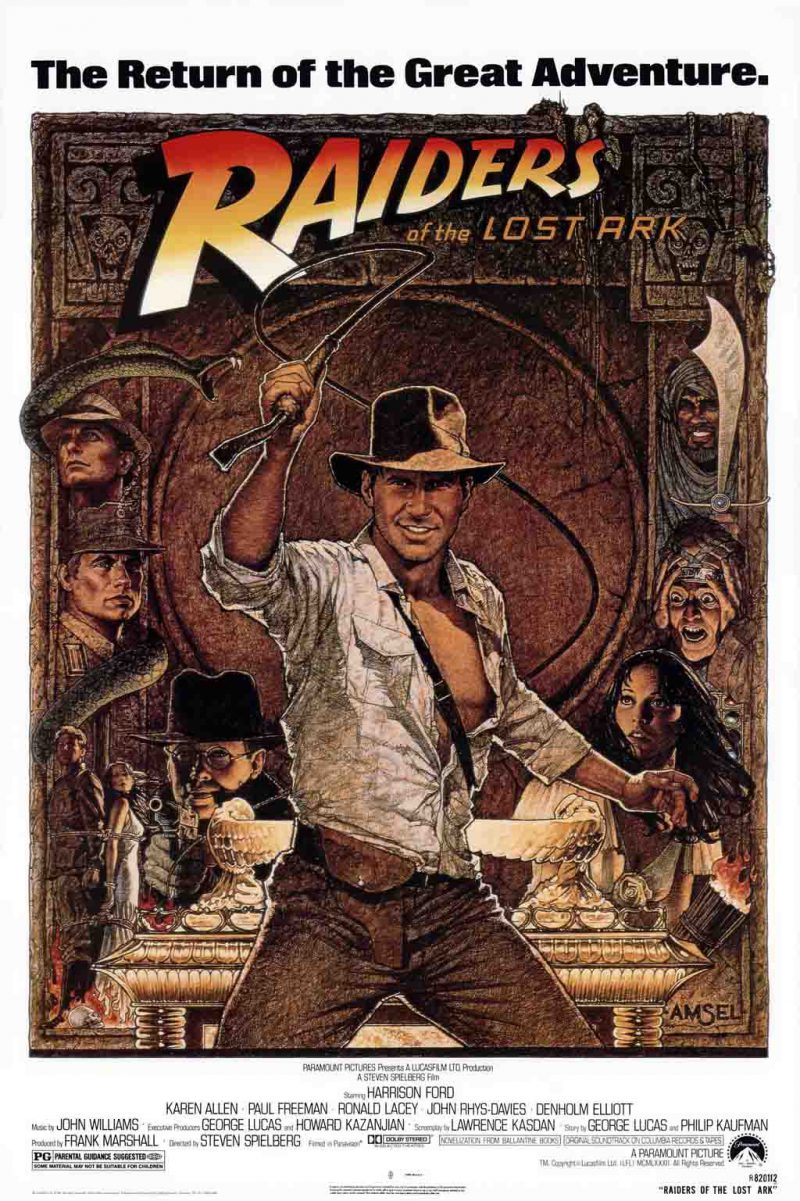 Current interest in 1980s pop culture cinema reflects the emptiness of current media, the longing for a simpler and clearer time, and a need for old-fashioned adventures that were not simply excuses for characters to deliver politically-correct speeches every few minutes.

Raiders Of The Lost Ark will not scratch that itch because unintentionally, it became propaganda in the Star Wars style for a religion and political orientation which defined the postwar period, and as such, it has aged poorly despite being an enjoyable film.

We should focus first on what this movie does well: no wasted screen time. Every second of every scene has utility and the filmmakers and actors do their best to layer things, for example ironic humor with sadness, or action with advancing the plot, in addition to the classic technique of exposition with character development.

The intensely charismatic acting talent aids in this quest. Karen Allen could make bouillon commercials interesting, and Harrison Ford has mastered timing in a way that we have not seen since Paul Newman. Actors take their time, which makes it intense when they rush statements or gestures, and manage to weave in enough ambiguity to advance a plot which like Star Wars is equal parts braindead action, grudging love story, and coming of age tale.

The growth of Indiana Jones from self-absorbed person to one capable of affection like love, through his desire for an intensely mysterious artifact, brings together this plot like a finely-calibrated machine. With the elements in play, the script can riff off itself, something which few filmmakers can achieve — despite nearly all of them trying — because they fail to set up the plot properly.

With characters who have depth enough to have inner conflict and unquestioned beliefs alike (the “workshop style” method of writing never addresses this, being fundamentally egalitarian) the plot advances on the force of personality, driven by a classic plot of a character pursuing an outward goal in order to clarify his inner growth. Ford makes Jones come alive as equal parts surly rogue and bookish nerd, a man who does not understand his world but knows where his passion lies.

In terms of this film aging poorly, however, the main factor is that the formula wears thin at times and relies too much on absolute goods and bads. The third world characters must be all-good; the Nazis must be all bad, and robotically so; the Americans must be well-meaning innocents. This makes the film reek of propaganda, and this reveals it as a manipulative agent of a simpler time, not a return to a simpler time as nostalgics desire.

For those of us from the present day and age, the supernatural dimension reveals the widening split between the West and the middle east. The middle east remains mired in superstition, where an absent god from a dualistic perfect world reaches in to manipulate this one, while the tendency of our time is to see God/gods as an all-pervading force which has left it up to us to steer the ship and even to figure out what is true.

As a result of these combined factors, despite a highly energetic plot thrust forward by the evolving demands of its characters, this film seems a bit saccharine and programmatic in retrospect, a vestige of the Cold War in which we fought atheistic, robotic Communists and politicians talked about God too much for the health of our minds.

This outside hand, controlling from within the film, ruins the suspension of disbelief that enables us to buy into a comic book character engaged in a hybrid of adventure, Western, and noire that invokes religious themes much as Star Wars did. There, the fantasy universe in which individuals manipulated a nihilistic spiritual power had more appeal, where here the search for Big Sky-Daddy and Big Daddy correct ideology mars an otherwise intense story.

Even more, now we are too jaded to believe in any government being good, ill, or benevolently neutral as the Americans are posed to be. The alternately triumphant and sentimental music comes on just too much, the action scenes are just too pure, to achieve the balance that a good Western — for example — would have.

Nonetheless, it proves enjoyable to journey back into the 1980s, but the fact that it feels like looking into childhood has more to do with the emotional manipulation and superstition embedded in the film than its placement in the twisting ladder of years.