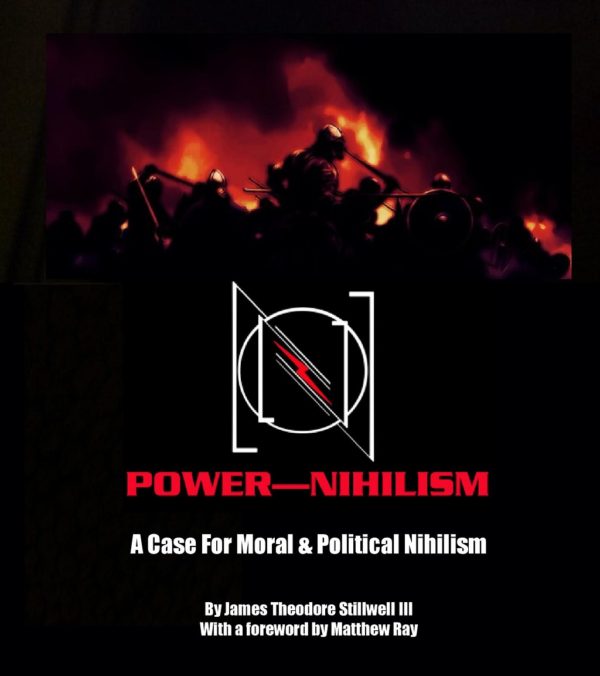 Nihilism attracts much confusion because it is an entirely different way of viewing the world. It is the direct opposite of the universalism of this time, which states that there are universal truths which can be discovered and spread to other human beings. Instead, nihilism advocates a hard realism in which aspects of reality are discovered, but not preserved or communicated.

James Theodore Stillwell III enters the fray with Power-Nihilism: A Case For Moral & Political Nihilism, a short book which affirms a Nietzsche-Redbeard view of nihilism as the need for the individual to not be ruled by the herd, and find meaning where it is relevant to the individual. This “might is right” expression of nihilism conveys many benefits, but also might need further development.

The book affirms the basic idea of nihilism through a study of morality which it rightly views as conditional. That is, if someone wants to survive, they must eat; however, there is no universal commandment that all must want to survive. With that in mind, Stillwell dispenses with the idea of objective and subjective morality, and focuses instead on the morality of survival and self-expression.

Morality doesnâ€™t state ‘If you want to achieve X you ought to do Y.’ Rather, it says ‘Thou shalt not commit murder!’ regardless of whether you are concerned about facing the death penalty or not! It is this kind of imperative the moral skeptic rejects because outside of the context of punishment and reward there can be no motivating force to propel one to act in a certain manner. After all, if I want to perform X and am immune to penalty why ought I not do X? Because it’s ‘wrong’? What does that mean? Hence the nihilist contends that only hypothetical imperatives are tenable. Every prescription not based upon a value premise (a goal) raises questions such as a ‘According to whom?’ and ‘Why not?’ because every imperative logically implies a subjective aim. Therefore the Categorical Imperative is nothing but moral mysticism dreamed up by moralizing sophists! (32)

His vision is to restate morality not as a normative commandment, or that which tells people what they should do, but as an gesture of will: people are different, and some who wish to break from the herd find a morality in asserting their will upon reality and need no reason to do so. This instinctual morality fits within a naturalistic analysis, where humans are Darwinian creatures struggling for survival.

Onto that, Stillwell grafts a bit of Nietzsche — “Nietzsche defines a healthy society as not existing for its own sake, but for the sake of a higher type, that is the ‘value creators'” — and argues essentially that these cannot sensibly obey herd morality and must do what they must, in full barbarian bloodlust, because like the natural selection in nature this produces higher proficiency and therefore, better results for humanity.

This combines with his individualist theme, and ultimately masters it, somewhat to the surprise of the writer. Stillwell correctly intuits that higher men cannot live by the rules of the herd, but then posits that they should live for their own instincts, when really his writing verges on the idea of instead having them act toward the value creation process, i.e. a transcendental outlook that values supremacy, proficiency, excellence and creativity above the usual rote labor-by-the-pound of the herd.

The slavish herd animal lives a pessimistic and fearful existence. He is timid and uncertain of himself. This type of man lacks courage, he attempts to make virtues out of his weakness and cowardice and ‘to make the best of a bad situation.’ He elevates those virtues which serve to alleviate his suffering. He honors virtues such as pity, empathy, compassion, patience, humility, and equality, for to him these are the most useful qualities. Slave morality is essentially that of utility. Such ones tend to demonize and resent the powerful, the virile, the egoistic, and self-assertive. Such lowly specimens are often pessimistic concerning the human condition, and some even find themselves gazing into the abyss of anti natalism. (73)

In this, Stillwell also reveals a flaw in Nietzsche. For Nietzsche, philosophy resolved into a type of artistic idealism whereby the individual struggled for beauty in a fusion of the Romantic and ancient ideals. The nihilistic perspective on this, however, is twofold: first, it is esoteric and most people cannot visualize it, so teaching them individualism works against it, as individualism re-invents the values of the herd. Second, it is a goal higher than the individual which requires subsuming the individual to its direction. A nihilist must be nihilistic about all things, including the self.

Power-Nihilism: A Case For Moral & Political Nihilism does an expert job of introducing all these ideas efficiently and compactly within a small package, and opens more questions than it offers answers. Mainly it demystifies and debunks most modern illusions and introduces readers to a world where reality is only known by some humans in varying degrees, and there is no “us” or universal right way of doing things.

Stillwell writes in an open style, merging contemporary idiom with philosophical language, that allows the book to introduce a dense concept and then breathe as it explores its depth at a more leisurely pace. Citing extensively from philosophers including Nietzsche and Schopenhauer, Power-Nihilism: A Case For Moral & Political Nihilism provides a doorway from kiddie nihilism of the anarchistic revolutionary type into the full moral ambiguity of the real deal.