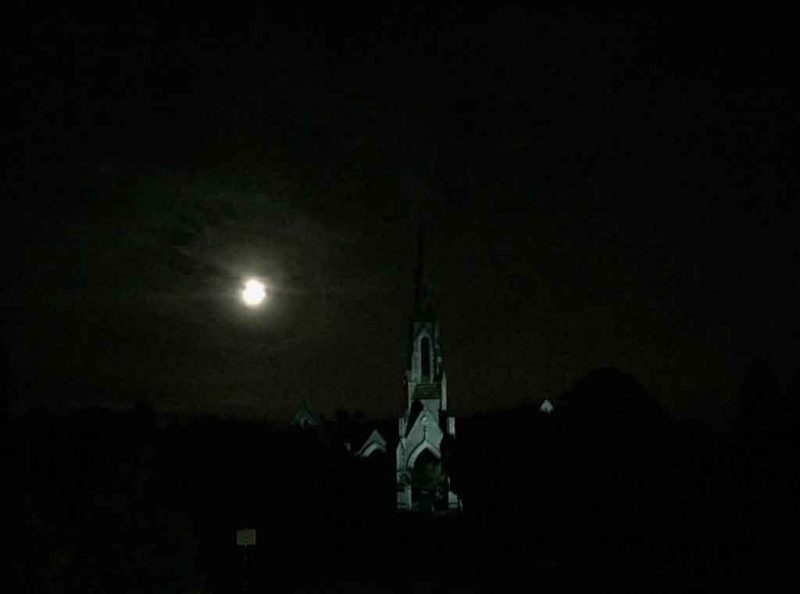 Whirring sounds caused a rumble in his stomach as he rounded the corner to his office after a commute that was equal parts tedium and terror. His laptop ran at full tilt, which he knew meant an operating system update, which meant that he could not do as he usually did and spend the first hour before everyone else got to work clearing out his email, which overnight seemed to fill with meeting requests, reports, and other paperwork he had to address but would never need.

Instead he ambled down to the little kitchenette known as an employee break room where he could get himself some coffee and see if any food had arrived. Their office had a lot of meetings, so donuts or the remnants of catering were not uncommon. The company itself seemed to delight in giving out candy and pastries. That alone unnerved him; he recalled one day getting there early before anyone else arrived, and remembering the sights, smells and sounds of his kindergarten class thirty years prior, standing there wondering for only a minute before he realized that the office and the kindergarten resembled each other more than not.

“Morning, Mr. Schultz,” said a friendly voice, and he turned to see Charles Larson at the sink.

Larson nodded, and passed him over a donut gently clamped in a square utilitarian napkin. “I do the same thing you do: dump the email box, then do a few hours of real work, and the rest gets torn up in meetings, continuing education, paperwork, you name it. By mid-afternoon I’m fairly shot anyway. Time for the old man to have a nap.”

They shared a chuckle, each standing there preparing his coffee by the painstaking methods that one adopts when time is already spoken for so making oneself utterly comfortable to the detail becomes the most important personal insulation against the futility of exertion. Larson made no secret of the fact that at age fifty-six he was on the descending part of the arc of his career. He had made some successes in the past, but now was mostly there to keep going until retirement, and he did not hide his greater joy in his family and going to the lake to go fishing with his son, who was expecting a new baby, than in staying late and trying to prove loyalty like the younger people did.

“There’s a software update,” said Gary, to keep the conversation going. The emptiness of his office seemed to howl down the hallway as he envisioned the possibility of entering it alone.

Larson sighed. “There goes that idea,” he said. “Maybe I’ll take that nap early instead.” He winked and left. Gary turned back to his coffee, adding one each of the two types of creamer packet he liked, the proper balance of sugar, and a touch of cinnamon. As he lifted up his mug, an impact jarred his hand, spilling thick coffee across the counter. A woman came in to use the sink, and looked at Gary with disdain.

“Hello, Greg,” he said, without looking up. A grunt came in reply. Greg Mauldin stood next to him, filling his own coffee cup. He was the source of the bump whose results Gary was now cleaning up with a wad of square napkins.

“Might want to quit hogging the sink,” was all Greg said, then wandered off to his own office. If Gary had a nemesis at this well-paid but purposeless job, it was Greg, who routinely found ways to criticize, belittle, and exclude Gary, always staying below the levels that HR might find troubling. The two were opposites: thin, pensive Gary and brusque, impulsive Greg seemed like extremes of the employee archetype, so it was not surprising they clashed, thought Gary.

He had asked once. “Hey Greg, did I do something to make you dislike me?” he had said after one particularly tedious and rambling meeting. “It’s just who you are,” said Greg in response, then gave him a dark look and left in a hurry. Their supervisor saw no problems with the relationship, but other workers remarked that Greg was often a bit aggressive and found people like Gary to be mere obstructions.

With his half-full mug, Gary walked down the long hall to his office, where the machine was still updating. This presented a quandary, since the rule of Office Land was to always look like you were doing something that made the company money, even if the employees knew that they were there as warm bodies to make the process look like it was working more than actually produce anything of value.

He sifted through the stuff on his desk, but he had nothing he could do without the machine. The phone presented another possibility, but he had no calls to make. The stagnation of a Thursday morning set in. Someone passed behind him in the hall. He grabbed a legal pad and headed to the empty conference room.

Sitting there, pencil in hand, looking at the blank lined paper, Gary did his best impression of someone in the throes of a complex task. He sat and thought of things he could write, lists he could make, or documents he could draft, but nothing came to mind. He was interrupted by a knock at the door.

“Please, sit,” said the newcomer. “I’m Scott Watterson, the company headshrinker. I was actually looking for someone like you.”

“The company is concerned about isolation. Studies show that creativity is enhanced by employees interacting in their daily spaces. People sitting alone suggest a lack of this important collaboration.” Watterson had very blue eyes that seemed to catch the light when he was thinking. Although he generally distrusted psychiatrists, since usually their appearance meant the ending of careers which in turn presaged the loss of mortgages and divorces, Gary found himself drawn to this strange figure. However, trust occurs gradually, if at all, and so he thought carefully before his answer.

Gary split into two people. One said the obvious: “None of our jobs require creativity. We are making gadgets work to sell other gadgets to people. Every aspect of this is a science, and we try to do as many details as possible, and the number we get right determines how well we succeed, sort of like at school.”

The other wanted to keep his job. “Creativity happens for me in several forms. One involves other people, and another just sitting with a task until it makes sense and then seeing what I can do with it,” said Gary after a pause.

Watterson pursed his lips. “I’d give that an A plus as a politically correct answer. Do you find it easy to interact with other people here?”

“Yes,” said Gary, then added, “Generally. Most people here are friendly. When we meet up for brainstorming sessions, the creativity comes out. After that, we just have to do the work on our own, as best we can.”

He stood up. “Thanks for the chat, but I have to go see if my computer is done installing its update.”

“Ah,” said Watterson. “Your creativity came about in finding a way to strategically wait that one out. I’ve seen a lot of it today.”

“The machines we depend on,” said Gary, “they let us do quite a bit, but then we become dependent on them, sort of like we go to the lunch counter and then decide what to eat, or have excuses in our mind before someone asks us to donate to their favorite cause.”

Watterson chuckled. Gary stepped into the doorway, and immediately felt an impact and warmth on his shirt.

Gary nodded and turned to go, but a firm grasp restrained his arm. Watterson looked down at him.

“You didn’t bump into him,” said Watterson. “He bumped into you. This is one of those creativity interactions in progress. Who are you, exactly?”

Greg made motions to depart, but Watterson reached out and touched his shoulder. “Come sit with us,” he said.

Gary found himself on the other side of the table, with the two men facing him. Greg was talking, for once in full sentences, and Gary felt surprised that he was listening. He was no longer concerned about faking work, and knew that even if he did nothing more for the rest of the day, he would be just fine. Someone even came by and asked, and Watterson waved them off with his credentials.

“Creativity really doesn’t come into what I do much,” said Greg. “There are right ways to do things, and you remember those, then do the best job that you can.”

Watterson nodded. “Interesting.” He looked at Gary, who felt a moment of panic when he realized he was being included in the conversation.

“My dad used to say that,” he said. “For the most part, it’s true. None of what we are doing is inventing the wheel. We’re just trying to make it as round as possible.”

Greg laughed. It was an abrupt, forced sound, but Gary did not think it was unwilling.

“Of course, he also believed that the belt was the best discipline,” said Gary, without realizing that he was at work talking to other people. Mid-morning had hit, blood sugar had dropped, and he was feeling sleepy and safe in the warm conference room and the presence of the comforting psychiatrist.

“Did he hit you?” Watterson asked.

“Well… yes, but only when we were bad.” Gary paused.

“How often was that?” asked Watterson. Gary nearly squirmed in his chair. There was no way to take this one any further without going into territory that was decidedly not for the workplace.

“Often,” said Greg. “You can tell by the way he flinches.”

Watterson started. “How do you know to look for that?”

Lost, Watterson looked between the two.

Greg looked toward the ceiling and pointed to his chin, where Gary could discern a thin white line. “He got me with the buckle once, said it built character. At that point, I started thinking that there were two types of people in the world, those who are the belt and those who are the flesh.”

Unsure of why he did it, Gary held out his hand. A similar line marked his wrist. “Mine apologized, he didn’t mean to do it, but it’s still here. The buckle got free from his grip somehow, and cut in right there.”

Watterson, speechless, looked between them.

“Well, that’s creativity for you,” said Gary, and they all laughed. He shook hands with both, then stood up and left, leaving behind the legal pad and pencil.

Greg went to the window. “I never told anyone about that before.” Watterson joined him.

Together they watched as Gary exited the building. He stood on the sidewalk for a minute, then someone called from the park across the way. He stepped off the curb and walked.

“No, no,” said Watterson, and they both watched in horror as a garbage truck changed lanes around a parked car and bore down on Gary, who saw nothing. Impact occurred at maybe thirty miles an hour, or just enough, as the engineers would say.

“Creativity,” said Greg, his hands shaking, and left the room.

Periscope (October 11, 2018) | Leftists Invent A Laughable Version Of The Sweet Meteor Of Death