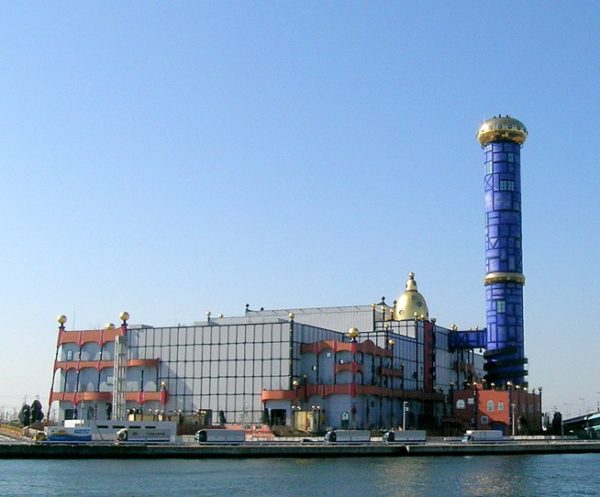 Austrian-Jewish artist Friedensreich Hundertwasser broke boundaries not so much through progress, but through rejection of it in favor of nature. He spoke highly of the organic form and rejected the intellectualized human intent which characterized so much of his chosen field, architecture, and instead aspired to make buildings that conveyed a sense of naturalness and pleasure for their occupants.

“Fortunately I’m not a trained architect,” he said, “because if I had been, I would have been brainwashed – straight, square, ugly, empty, dogmatic and intellectual. It’s so important that the buildings in which people live are in harmony with nature and in harmony with human creativity.”

Hundertwasser has a hatred of the straight line, which he says occurs nowhere in nature. He believes that conventional geometrically-based architecture is “not only obsolete, but a crime against humanity”.1

In his revolution against the straight line, Hunterwasser discovered another principle: architecture should resemble nature, which unlike the blocky constructions that are easy for the human mind to remember, has a flexible layout with high internal variation that pairs closely to function, making its use transparent to the human which has evolved under a similar system.

These thoughts lead Hunterwasser to places that good Leftist subjects are not supposed to go, namely the idea that modernity itself was the same type of arrogance and denial of both nature and our inner nature:

Austria needs something to look up to, consisting of perennial higher valuesâ€”of which one now hardly dares to speakâ€”such as beauty, culture, internal and external peace, faith, richness of heart […] Austria needs an emperor, who is subservient to the people. A superior and radiant figure in whom everyone has confidence, because this great figure is a possession of all. The rationalist way of thinking has brought us, in this century, an ephemeral higher, American standard of living at the expense of nature and creation, which is now coming to an end, for it is destroying our heart, our quality of life, our longing, without which an Austrian does not want to live. It is outrageous that Austria has an emperor who did no evil to anyone but is still treated like a leper. Austria needs a crown! Long live Austria! Long live the constitutional monarchy! Long live Otto von Habsburg!2

In this way, he saw nature as emerging from a sense of intense power of design, and an inherent wisdom that is beyond the human and approaches the divine. This extended, as he saw it, to the structures humans used to rule themselves as well as the ones they live in.

A community should not consider it an honour how much spontaneous vegetation it destroys; it should rather be a point of honour for every community to protect as much of its natural landscape as possible.

The brook, the river, the swamp, the riverside wetlands as they are, the way God created them, must be sacred and inviolable to us.

Correcting a stream only has evil effects, which are expensive in the end: the lowering of water tables, the destruction of forests, the transformation of large areas into steppes, no regeneration of the water, which runs off too fast. The river wetlands can no longer fulfill their sponge-like function: the absorption of excess water and slow feedback in dry spells, like a good piggy bank in times of emergency.3

In turn this pushed him to less politically correct realizations. He became a foe of human intent, and an ally of that which humans refuse to recognize, which is that subjugating the world to human intent produces destruction, not Utopia.

The so-called E.U. is contriving to destroy our life base, our ageold cultures, our small, evolved idiosyncrasies, our species diversity and our self-esteem.

…Europe is only strong thanks to the diversity of its autonomies. This small-scale diversity must be bolstered and protected. This diversity is Europe.
4

While his designs reflect a postmodern rococo vision that allies itself with the corrupt nature of modern thinking, his attempt to make these outlandish and colorful structures into something more natural lessened the sense of “triumph of the ego” of modern design, and pointed it toward a more organic, variable and flexible pattern language.

2 Friedensreich Hundertwasser, “For the Return of the Constitutional Monarchy.” Kaurinui, New Zealand, 28 March 1983; dedicated, on 14 May 1987, to Otto von Habsburg for his 75th birthday.

3 “There Are No Evils in Nature. There Are Only Evils of Man.” Retrieved from http://www.hundertwasser.at/english/texts/philo_misstaende.php.

4 “To Join the EU Is To Betray Austria And Betray Europe. Why?” Retrieved from http://hundertwasser.com/text/1.4.5.1/hl/130#titleanch.

Leftists Are The Party Of Human Intent, Which Is Always Wrong | “Cordycepted”