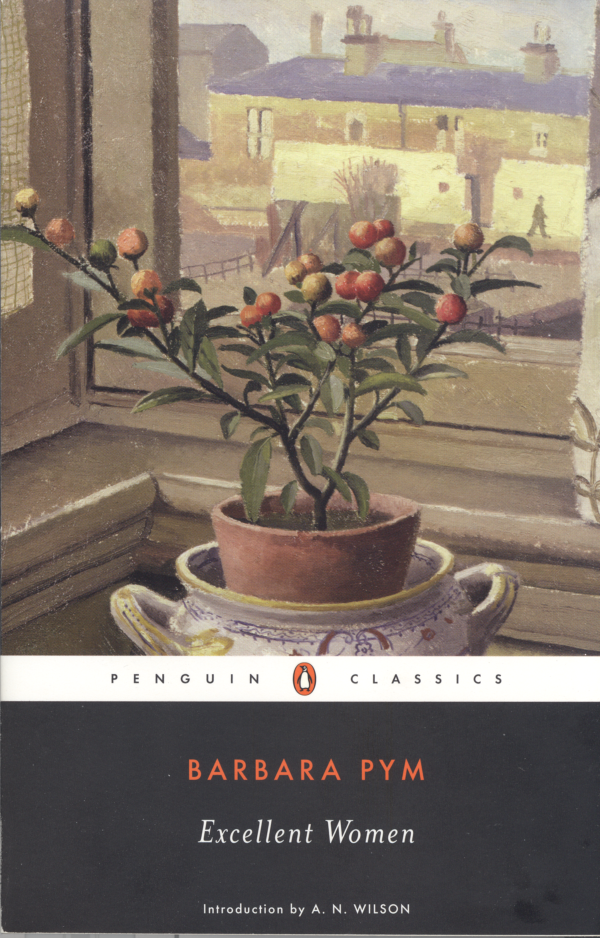 Most likely, Barbara Pym’s work gets filed under “women’s fiction” and left there, but her work belongs more to the camp of English literature that criticized the rise of industry, the breakdown of traditional values, and the dominance of the city. A fan of Dickens or Houellebecq would find quite a bit to like here.

She fools her reader and lulls him into complacency at the same time. On the surface, Excellent Women is a chattery English novel full of tea-time conversations, odd encounters in the street, awkward church gatherings and confused dinners. What it captures however is how the confused values of modern society exclude good people and make them into servants for the chaotic, immoral and prosaic neurotics among us.

This book follows Mildred Lathbury, who appears to be one of the excellent women indicated by the title: the daughter of a clergyman and an unmarried woman heading into her middle 30s. She volunteers at her church, lives a rich intellectual life, and provides amusing and biting commentary on the people and institutions around her. Instead of being repressed, she comes across as simply not interested in the day-to-day fascinations of those around her who lack self-control, and more likely someone looking for a purpose.

I did not look forward to my evening at home, and all the useful and half-pleasant things I had planned to do, like ironing and sewing and listening to the wireless, seemed uninteresting and unnecessary. In the end I decided to go over to the vicarage and see if there was anything I could do there. (198)

Excellent women are those who are highly competent, nurturing and able to tie together the institutions that kept Old England functional behind the scenes. These however are under attack, but from within: temptations toward the trivial, the illusory and the disposable abound, and people either resist and are marginalized, or give in and become irrelevant in a different way by joining the faceless masses of people with needs.

Lathbury and those like her find themselves in a supporting role to these faceless ones — portrayed as distinctive on the surface, but once the behavioral pathology emerges, secretly as boring and purposeless as their behavior indicates — which results in the best people in her social circle becoming janitors for the worst. These are careless like Fitzgeraldian characters and hollowly repetitive in behavior like those from Kerouac, raging through days and nights looking for a cause.

We were rather far from our own door, and just as we were walking past the parish hall, Teddy Lemon and a group of lads came out, laughing and talking in their rough voices. My heart warmed towards them, so good and simple with their uncomplicated lives. If only I had come straight home after the paper. (88)

In this book, the familiar theme emerges: the more complex people have ruined themselves with neurotic complexity and missed out on the life that simpler people, unbound by self-consciousness, live as a matter of normalcy. The excellent are caught up in a social order that, halfway between function and dysfunction, occupies their time but does not achieve the results it promises based on what it has done in the past. This ends in the good being occupied by mental nonsense, and the normal doing what they do without self-reflection.

Consistently, Lathbury finds herself caught up in activities which are quickly dominated by the more dramatic, after which the excellent women clean up and then go home alone. She finds a beau, but cannot communicate with him that she has interest, nor reach outside her social role to make a move, and his clumsy responses remain mute as well. As is true of the intelligent, these people are portrayed as inept at communication of emotional matters, and dependent on social activities to communicate these — but those activities have been gutted by the advance of industry and liberalism, stranding these people in worlds of self-doubt and uncertainty.

When the first course came, it turned out to be spaghetti of a particularly long and rubbery kind. Rocky showed me how to twist it round my fork but I found it very difficult to manage and it made conversation quite impossible. Perhaps long spaghetti is the kind of thing that ought to be eaten quite alone with nobody to watch one’s struggles. Surely many a romance must have been nipped in the bud by sitting opposite someone ordering spaghetti? (86)

As if echoing the postmodern novels to come twenty years later, in Excellent Women time and time again signals are missed, communications lost, and gestures misinterpreted. This comedy of errors expands as characters are forced to deal with (mild) crises and find themselves unable to put a finger on the actual narrative of events, becoming lost in social conventions and the distractions of the drama around them as it conflicts with those social norms, and yet its actors seem oblivious — whether deliberatley or unconsciously — to their own incompatibility with what had a generation ago been the norms.

What makes this book subtle is the tendency to stay within mild crises, and to keep conflict with the minds of its characters. Nothing vivid occurs, only shades of normal, but within those confines, a spirit cries for release. Hathbury seeks the kind of love that transcends the pitiable romances and flings with which people distract themselves from their sense of purpose. And the excellent women, who have a sense of purpose and groundedness in the maintenance of civilization and civility, go home alone — and stay there.