Enjoy the Decline by Aaron Clarey 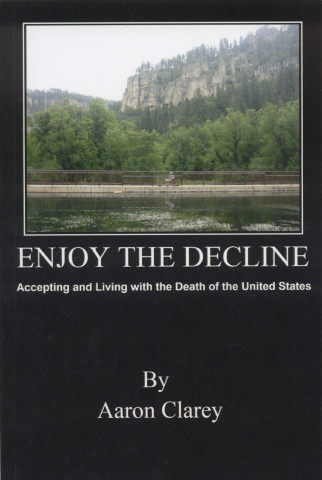 To even the typical half-asleep voter-citizen-consumer the downfall of the West is obvious. The US in the New World and the EU in the Old World represent similar decisions and, with their foundations in liberalism, a shared direction. Both have also chosen to deny reality in favor of socially popular decisions that have essentially created social chaos, destroyed the family, gutted culture and ruined their futures.

So what do you, the individual, do about this? The vast majority of people are sleepwalking into suicide because they can’t understand or are afraid to face it. The nature of liberal societies is to destroy the intelligent first because those are the ones who notice how vastly the civilizational framework is failing. Because people do not recognize that civilization itself needs defending, it is impossible to motivate the majority to unite or to recognize that it is defending its own social and the rules that liberals strip away help maintain that social order. Majorities wake up very slowly if at all because unlike the attackers, majorities have many motivations, where the attackers have only one. As liberals gain more power in the West and it starts to feel like the Soviet Union before 1991, the question is what you should do. Aaron Clarey comes up with an excellent description of the downfall of the West, specifically the USA, and a Ran Prieur-style minimalism and drop-out solution for the individual. The first is convincing.

Clarey’s thesis begins with the observation that Americans electing Barack Obama a second time was a very bad omen. Not just what Obama will do, but that We The People have officially announced that we can be bought for pennies on the dollar and will simply pass the buck on to the future. When you reach that stage, there is no recovery; there is only collapse and then a small breakaway group making a functional civilization again. Clarey accurately renders judgment that the US has failed not because its government is bad, but because its citizens are greedy and will gladly vote for the public purse to be spent on them. This opens the door to charlatans of all sorts of which Obama is just the latest.

The result is what we can all visually see. The sad, never-smiling leftists. The “vegan-parents” who send their poor kids to “drum circle camp” instead of “corporatist” Disney World. The ugly hipsters trying their best not to conform, only to become the epitome of conformity. The worthless liberal arts doctorate who can’t find a job, but sublimates it all through bragging about her green credentials. All the while keeping up an air of condescension when it comes to rubes, you hicks, who couldn’t possibly have the intellect to understand the finer and deeper points of their obviously-superior culture. (188)

Clarey, who blogs at Captain Capitalism, has the liberal elite pegged as the hollow men they are. He knows what happens to any countries in the grip of such insanity and connects with the opposite, which he calls “Real Americans”: conservative realists who trust nature more than ideology and common sense more than the media. He sees this group as the last marginalized group since they are not only the dreaded white heterosexual majority, but also those among that group who choose not to just turn off their brains and go along with the trends. His advice to this group is to recognize that a liberal government will take everything they have or produce and hand it over to its favorite pitied groups in order to buy votes, thus the only sensible response is to have nothing.

As a result, Clarey advocates living on under $15,000 a year; not having children; owning very little; not owning a house; rejecting a career for self-employment. I wondered, “Where have I heard this before?” Oh: “How to Drop Out” by Ran Prieur, an essay whose flaws I dissected at the time of its release — but even more importantly, we heard this in the 1960s. Before that, we heard it in the 1950s. It probably goes back even farther. The point that is being made is to view life through a personal filter only, and to throw in the towel and live a drop-out life. The problem with it is that then you have zero power and nothing will ever change, and you will also live in poverty. I imagine that Clarey knows his audience and realizes that this is popular advice for young people. Older people may be less inclined to accept his wisdom as being powerless is to truly endorse those who want power over you.

However, he does make a good point in counseling people against being obedient. He urges young people not to waste their younger years chasing careers, and to some degree, this is very good advice although it will leave you in your 40s with nothing established. He notes that escaping jobs produces better mental health and allows you to have flexibility of mind again, thus if you want to be an entrepreneur, it’s a good first step. He also correctly diagnoses the weaknesses of many American habits including owning too much stuff and caring too much about what the neighbors think. The best parts of this book however are the diagnostic and not prescriptive parts, in which Clarey reveals the dysfunction in its many forms and why it is moribund.

While this may have been the case at the founding of the country, unfortunately the relationship between the state and its citizenry has become parasitic. This fact is no better highlighted than in the previously mentioned chart showing a full 70% of government spending going to income transfers. These income transfers are parasitic in nature in that they benefit a specific group of people instead of investments, infrastructure, roads, defense, and other public goods which benefit everyone. Sadly, this relationship is becoming even more parasitic as per the wishes of the American electorate. (57)

During the diagnostic sections of this book, which are scattered throughout, Clarey describes elegantly and with good use of facts the failings of the consumerist-socialist hybrid that is modern society. He has the understanding of an old conservative here and can articulate himself well. As a reader, my impulse is to say that rather than going through the downfall of collapse, we might just work on those things and/or disenfranchising the parasites he identifies. While this book covers a lot of similar ground especially in the second half, it is written as a low-impact introduction to this kind of thinking and if it reaches newly disillusioned hands could be a powerful wake-up call.