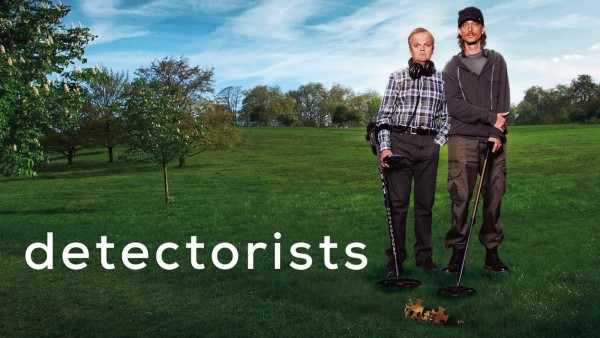 One does not need to know much about television of the movies to know a good story told well. Detectorists follows a simple theme: two men adrift in life bond over their hobby of using metal detectors to search for treasure. In the process, they discover what they have been seeking is just under their feet.

In this theme, Detectorists comes from a long line of English writing that emphasizes the qualities of real life which are hidden beneath the bustle of a modern world. We can hear echoes of Wordsworth in the simple contrast between the utter pointlessness and confusion of required life activities and the peace and clarity these men find while wandering through the wild English countryside.

A running gag appears in the trope that the name of the machine used to find buried metal is a metal detector, where someone who uses one is a “detectorist”. No one outside of a small group grasps the distinction, and normals tend to call the men metal detectors, to be corrected each time. This seems to highlight how little respect for the autonomous human is found in a world where both men have menial jobs and unstable family situations, not to mention zero reference to having ever had parents or extended family. This show does an excellent job of showing us the isolation of our supposed Utopia, then cutting to scenes of wild grasses, flowers, insects and sprawling vistas of open land.

Hapless, the two find nothing more than junk — metal leftovers from the industrial age — most of the time. But what they seek, and affirm time and again, is a connection to the distant past. One of the two main characters opines repeatedly that he wants to touch something from the Saxon or Roman age, the time before the now. This urge propels them out to wander the hills and fields in their free time, seeming improved for the quiet and focus that it gives them.

The show has its politically correct moments, as does everything in the contemporary milieu, but these are included almost pro forma and are contrasted by the many normal English people going about life. Mackenzie Crook, who both wrote and acted in the show, captures both a satisfaction in a lack of change — things being where they always have been, as they have been — and a sense of yearning or striving for greater significance than jobs, shopping, voting, and television can offer.

In addition, the lead characters Andy and Lance reveal themselves as dreamers in a world of the half-awake. In one scene, Lance asks a coworker if he has seen a trivia show on television called University Challenge, and gets in reply a scornful look. History and facts of the world matter little to many people, who seem inert by their nature, and fully occupied in the external activity around them.

Ultimately, the show focuses on the question of the good life, or what is meaningful to live for once one has material stability and the comforts of normal life. Characters seek a connection to the past, or to something larger than themselves, but cannot articulate it, so they are stumbling in a shadow world as they struggle to understand themselves and then, what connections they might make to avoid being totally atomized.

The series theme song gives a hint at what they seek and find:

Will you swim through the briny sea for me?
Roll along the ocean’s floor?
I’ll be your treasure.
I’m with the ghosts of the men who can never sing again.
There’s a place follow me, where a love lost at sea,
Is waiting for you. Is waiting for you.

As with any plot device of this type, the audience becomes increasingly aware that the treasure is a real-life metaphor. These men seek it as a symbol of what they want, but what they desire is found inward. The suggestion lingers in the air that they are steadily finding it through family, friendship, honesty, history, nature and a love of their homeland, England, even as it crumbles around them.