Decline Of The West Explained by Bruce Charlton (2010) 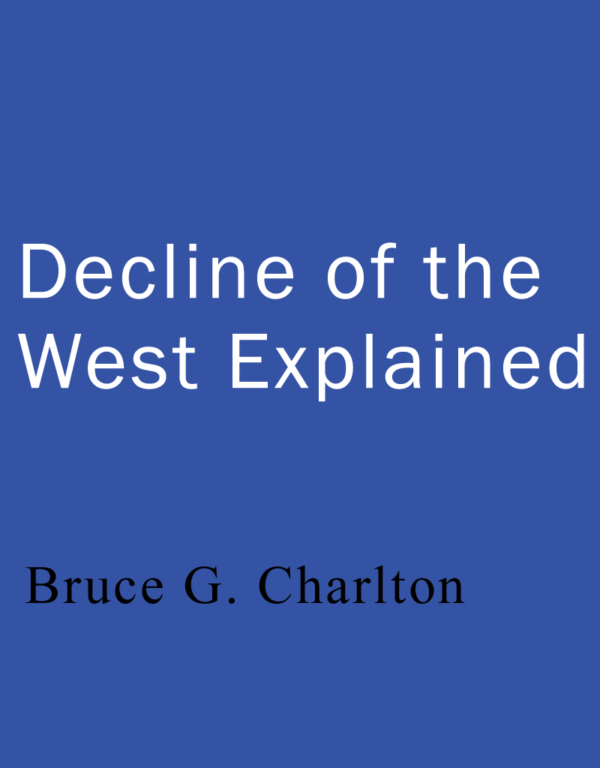 The question incumbent upon every red-blooded person manifests as, “What is the health of my civilization?”

A confident person knows that he or she can succeed according to just about any parameters, but if the civilization is failing, that success will become hollow and quickly erased by a history of incompetence, corruption, lies and dysfunction.

For this reason, the most “alpha” among us are concerned with the health of our civilization and whether it is heading in one of two directions: toward the default of decay, or toward an ascendant possibility of something greater, perhaps approximating what ancient Greece and Rome achieved.

Reading Bruce Charlton’s Decline of the West Explained, one must confront some vital questions about civilization itself, and in that is found the great value of this work: a highly articulate inspection of the way that high intelligence societies delude themselves and fail.

Charlton’s basic thesis: Western Civilization departed from Christianity, and thus lost any sense of purpose. In analysis, this does not hold up because the wave of liberalization, which represents hubris/evil, was the cause of this effect. Christianity had to depart because it implied a hierarchy first with God on the top, and second based on how well people fulfilled the moral mandate, and so the tendency of individualism wished to abolish it alongside with culture, values, standards and other hierarchy of behavior that could make people “unequal” as they naturally are.

However… he makes some excellent points about how de-sacralizing (removing the sacred) has contributed the decline of the West, and how what we face now is evil in the form of our decline, which comes at least from rejecting good and replacing it with a motive to destroy all good, since good reveals the emptiness of evil.

The point, in essence, is that living for worldly gratification stimulates the sin of pride and indeed regards it as a virtue. Pride and the search for gratification combine to *invite* evil into one’s life and into the world.

Here we have individualism, revealed and naked in its grotesque perversion hiding behind a veneer of social acceptability. What is evil, more than prioritizing self-interest above that of the order of nature and God? Evil sneaks into everything we do because humans are fundamentally evil, or at least fundamentally monkey, and this leads to the kind of short-term logic that rewards individualism.

This creates an economic model based on hedonism of the least interesting variety, that which is normally termed as “bourgeois” because it is an avoidance of risk and conflict. Charlton makes the point that those who seek individualistic pleasure will turn their backs on the needs of civilization and any higher goal.

So a society that values nothing higher than a pleasant life and which will seek the pleasant life whereever and whenever possible will be morally flaccid in face of opposition, will appease rather than resist, will submit rather than fight, and will therefore end-up being ruled by its most relentless and long-termist enemies – and by having an extremely un-pleasant life.

He points out the utter futility of democracy, which rewards the mass delusion at the expense of truth, which is found through individual dogged pursuit of truth against all convenience and comfort. Like Nietzsche, he defines it as a sort of mass insanity, a reliance on known impossible methods that then requires we doctor our thinking to make it seem as if the unworkable is working:

I believe that majority vote decision making is one of the most damaging aspects of modernity. As a system, it is quite simply insane – knowing what we know, knowing from experience its unpredictability, randomness, un-wisdom, distorting effects on human psychology…

He also targets other aspects of modernity:

Socialism is paradoxical, nonsensical, therefore intrinsically dishonest (in order to make sense of itself to itself).

This is why socialism unwinds into moral inversion.

One major theme in this book is how modernity requires we accept illusion that we know is destructive, and as a result, make our minds twisted and become robotic little Leftist zombies instead of whole people who can actually think:

Charlton explains this evil and its accompany psychology very well and makes a compelling case that the West cannot arrest its decline until it decides to be moral again, and he argues that it requires a restoration of Christian faith to understand this morality.

He analyzes society as the flight away from an ethic of convenience, and instead an adoption of a compulsion toward morality: doing what is healthful for the civilization instead of what is personally flattering, profitable, easy and familiar. This moral root of civilization requires the consciousness of good and evil that is present under religion, but missing with materialism and relativism.

The anti-individualistic nature of such a morality requires the individual to deny their impulse toward self-centered decision-making, and to think of principles and ideas in terms of their effect on the civilization and surrounding world instead of in the echo chamber of social opinion, in which the egos of individuals and the group unite in agreement on what is safe, unthreatening and flattering.

It seems that our literate ancestors (such as the ancient Jews) all spontaneously recognized that for a person to live according to their spontaneous desires – living primarily for seeking gratification and avoiding (or minimizing) suffering – was morally wrong.

Where this book could expand and be refined is to look practically at the process of liberalization: the tendency toward individualism is present in all humans, and per Dunning-Kruger it is most prevalent in those who can understand nothing beyond themselves.

With that in mind, collectivized individualism stands revealed as the hubris-based initiative that unmakes civilization. This leads in a Leftward direction because “equality” is the principle required to group people together into a mob. At that point, the mob inevitably tends toward atheism.

The reason for this materialistic drift is not a rejection of religion in itself, but a taboo on what it requires. Having a god and a moral standard means that we are not all equal, because God implies hierarchy, and a moral standard also creates social rank. That offends the egalitarians, and so they attempt to destroy religion alongside culture and race so that they can create their control-oriented egalitarian paradise on earth.

The main problem is, I think, that mandarins are expert at ignoring common sense reality and focusing on abstraction.

Charlton does an excellent job of showing how human reason betrays us as soon as we go down the path of arguing from material logic. The Cathedralists or faux elites — whom he calls “mandarins” — are in his analysis the people who excel at this type of thinking, and it makes them civilization destroyers.

The greatest taboo in this time appears to be acknowledging that Western Civilization is not only far from healthy, but headed to doom, mainly because there is a huge market for distraction and denial products to make people feel better about living in a failing social entity. Mandarins are the priests of the cult of denial.

Decline Of The West Explained does an excellent job of explaining evil as the folly of human reason pointed toward the individual. Although its thesis argues for a restoration of religion, it also explains the need for a precursor in the form of a return of anti-individualistic thinking, which acknowledges the source of our decline and the relatively easy mental step required to fix it.

What Draws Me To The Far-Right | Here Are Your Surrender Terms, Whitey