Churchill’s Headmaster: The ‘Sadist’ Who Nearly Saved the British Empire by Edward Dutton (2019) 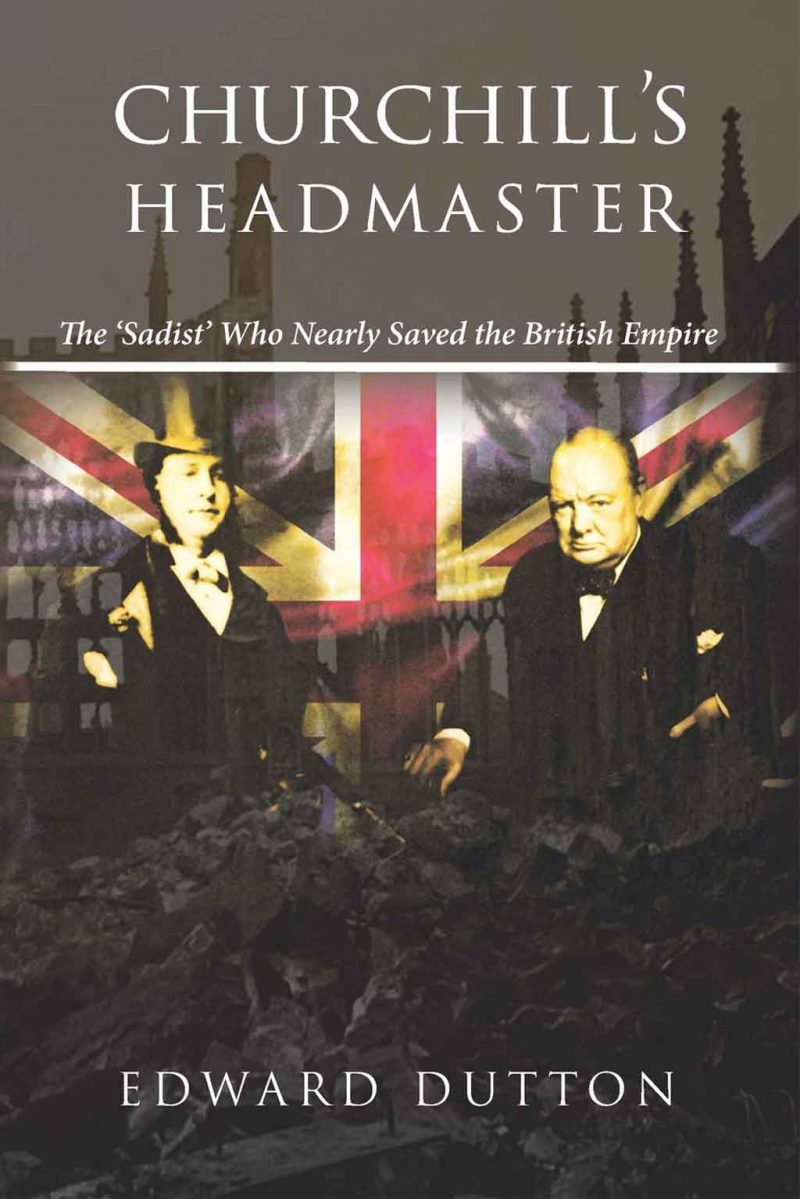 History shows us time and again that humans follow Nietzsche’s famous proclamation, “Who wants truth?” We act out of impulses that seem too fundamental to ignore as we shuttle between states of mental order and disorder, and then later rationalize our choices as good or right.

In the case of Winston Churchill, contemporary history favors him because his side won the war; had they lost, he would have had his own Nuremburg trial and been hung for allying with a known enemy in the Soviet Union.

As it was, the postwar years saw all of his imaginary gains undone. Britain languished in poverty, then became subservient to the German-controlled European Union; the Soviet Union fell, and America took over from the UK as the world superpower.

Where once English worksmanship was the pride of the world, it is now feared — no one wants an English car! — and the redneck antics of England’s chavs have outdone Florida and Moscow for white third world comedy. Churchill, in the long term, was a failure.

However, a perfect world does not exist because perfection means an absence of options, and this means that for new spaces to arise, false idols must fall. That will begin in the details, like every good overthrowing, and Dutton kicks this process off credibly.

Churchill’s Headmaster: The ‘Sadist’ Who Nearly Saved the British Empire throws itself at the weak point of a historical legend: his early schooling. Instead of the usual French Revolution tale of a gang of unruly misfits uniting against sadistic and perverse incompetent authority figures, this book shows us the inverse as a misfit almost gets checked by an authority figure before he, intelligent but corrupt, goes on to misdirect a nation.

In many ways, this book uses Churchill’s schooling as an excuse to write a psychoanalytic analysis of the man, which comes to us in a hybrid of the shorter, more informal postmodern style and the fluid, nuanced, and polyrhythmic older form of advanced written English.

While much of the book concerns history, a good deal of hard science comes out as well, using logical constructions about what is or is not likely given correlating factors to rule out certain behaviors and suggest the possibility of others.

This becomes useful when we consider the stealth thesis of the book, which is that Winston Churchill suffered from personality disorders which could have been cured through ritualized corporal punishment:

Poor life outcomes are strongly genetic and predicted by poor impulse control (Nettle, 2007), which also predicts being violent to your children. However, when this violence is ritualistic, structured, controlled and administered by a parent who is otherwise loving — with factors such as socioeconomic status controlled for — then use of corporal punishment (specifically to the buttocks), as long as it is not overly severe and is administered by a predictable parent or guardian, is associated with positive life outcomes (Larzelere, 2000). Indeed, when the children are from groups which tend to have poor impulse control and low Agreeableness — in other words, people like Churchill — the outcome was positive even if the corporal punishment was extremely severe, as long as it was structured and predictable (Lansford et al., 2009). When imposing genetic controls, corporal punishment only led to poor life outcomes if comprised of random violence, such as punching and kicking (Lynch et al., 2006). (189-90)

Dutton ties in an immense amount of research, building carefully on established data and then taking it in his own direction, with a rigorous sense for scientific logic and an ability to whittle down woo, hysteria, and rumor.

Much of the book concerns history, so the text follows a pattern of establishing facts, then analyzing them for what is likely to be true given the somewhat weak historical record and flaky or neurotic contemporary sources, and then subjecting it to a series of logical filters to determine the likely case.

This leads to a surprising thesis emerging from within what otherwise seems like an analysis of Victorian educational practices. We see how the system worked, and how Churchill escaped the system, and therefore, how much went uncorrected in the young Winston.

A twisting and turning development of narrative like this, uncovering new possibilities with every bend, provides an exhilarating read for someone curious about the depth of an issue. Nearly every aspect possible receives its moment in the spotlight of meticulous dissection.

For an inquisitive reader, which is a common type among those who like history books, Churchill’s Headmaster: The ‘Sadist’ Who Nearly Saved the British Empire creeps into the psychology of its protagonist and then into the nature of human civilization itself.

By doing so, it makes a convincing case that some of our old tribal practices were not accidents of history, but time-honored methods of achieving mental stability and reliability in the subjects in question.

In many respects, the schools were akin to the brutal rites of passage into adulthood that are undergone by boys, as they turn into men, in many tribal societies. These boys, like almost all boys in such tribes, were their societies’ future warriors and they had to be made into warriors: people who would obey authority, keep their emotions under control, endure physical pain, be mentally resilient, live for the future rather than the now, make sacrifices for others and deeply empathise with them, but have the ability to act lethally towards the enemy at the precisely appropriate moment. (32-33)

Churchill, by dodging much of this through methods described without adornment in the book, avoided the maturation rituals that prepared men for their futures, which enabled the antisocial aspects of his personality to flower, resulting in ruin under his leadership.

While he got away with it for the most part in the history books, our assessment of the past is like a whipping snake, such that only when the head is still can we tell where the tail is. In the case of Churchill, the tail that now seems like victory may change position in the future.

Having read some of Mr. Dutton’s work in the past, I found this book an engaging and lively read, with no parts of it extraneous; it is a methodical, detail-oriented, and heavily deductive study which rewards careful reading and supplies abundant fact.

Its ultimate development resembles an anthropological tome analyzing the necessity of hazing rituals in advanced societies, drawing in genetics and psychology as well as a comparison of the biographies of the various characters encountered in its narrative.

As we step out of the stupor of the late modern age, works like this will provide stimulus for the minds of those who want to understand a world beyond the binary moral judgments and financial assessments of a world that has lost its way.

It will also renovate our study of Churchill, who despite being broadly lionized in the past, may find himself coming under increasing scrutiny for the degree to which his pathologies guided his leadership.

Churchill’s Headmaster: The ‘Sadist’ Who Nearly Saved the British Empire seems like an exposition on a footnote, but it reminds us that no fact exists in isolation, and sometimes details open up new worlds of possibility.