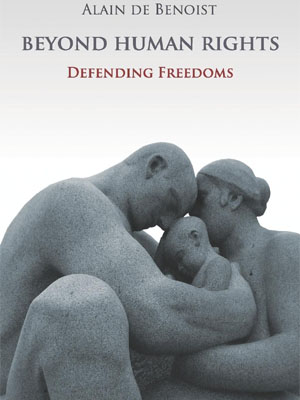 This highly dangerous book contains a disturbing thesis: that the implements of democracy, namely human rights, have become a moral proposition that is obstructing the political goals of democracy including personal freedoms.

Most importantly, de Benoist also offers an option to the cancerous expansion of “human rights” as an all-encompassing goal that rapidly migrates from defending human rights to subsidizing them as a matter of outcomes.

In this longer essay but short book, he posits that a renewed focus on shared maintenance of social freedoms is a more important goal than human rights, and achieves the ideal that human rights promises but never manages to deliver.

His thesis divides social goals into two camps: moral and political. In his view, democracy and freedom are political goals, meaning that they address the whole of a society. On the other hand, human rights are an individualist goal, and thus address only the individual, helping to fragment a society.

Because moral goals are closer to the individual, they become more popular, and then over-ride any political goals. Those tend to require more thought, since one is measuring not idealized solutions but a series of cause/effect relationships and their influence over years, demographics and social institutions.

de Benoist is one of those rare people gifted with the ability to sort through a lot of technical material and make it not only clear but interesting. His approach in this book is straight out of the fifteenth century, as processed through postmodern academia: he introduces his topics in a logical outline by walking through the different thinkers of influence on each, and clarifying definitions and origins of each idea before analyzing it.

He then conducts his analysis from all angles, with compassion for the idea at hand, as if determined to bring out its best side. After that, he dissects it into its essential idea and then contrasts that to the core ideas of related ideas. The result is a process of deepening analysis which leads to a concise conclusion, which in turn leads to another comparison.

The result is a quick and informative read that takes the word-hound all over the map of ideas. In many ways, this book is a useful history more than an analysis, as it shows us how ideas both snowball and simplify to their most basic concepts over time, often in ways contrary to the intentions of their creators.

Recalling the saying of Proudhon, “‘[W]hoever invokes humanity wants to cheat,’ Carl Schmitt had already remarked that ‘[t]he concept of humanity is an especially useful ideological instrument of imperialist expansion, and in its ethical-humanitarian form it is a specific vehicle of economic imperialism.’…Historical experience shows that the best intentions can have catastrophic effects. It also shows that the right of interference never resolves any problem but tends, on the contrary, to multiply them, as one has been able to see in Kosovo, in Afghanistan or in Iraq….Hardly had the French Revolution proclaimed human rights than, to render them more effective, it instituted the Terror. (89)

This type of analysis adeptly weaves between political justifications and actual political motives, and undermines human rights like other absolutely “good” political symbols as the blank check for interference that it has become. A repeated theme of the book is how, much as William S. Burroughs said “language is a virus,” ideas are viral as well and gradually take over their hosts and obliterate the original intentions behind them.

de Benoist writes convincingly about the relationship between human rights and commerce. As he traces the concept, the emergence of human rights as an effect creates a requirement for some cause that supports those, which can only be fulfilled by a market as by defending property rights it creates a sphere of individual autonomy and yet co-existence with a working social unit, of sorts.

From this he traces the rise of modern nominalism, where human civilizations do not so much have “goals” as they have functions built around the unstated goal of maintaining a market and facilitative social sphere in which individuals project their own functions. Yet as de Benoist adroitly notes, this in turn requires a strong government to impose the facilitative vision; he repeatedly demonstrates how individualism requires collectivism and some form of oppressive enforcement in order to function.

To posit that what comes first is not the individual but the group does not at all signify that the individual is ‘enclosed’ in the group, but rather that he acquires his individuality only in connection with a social relationship which is also a constituent of his being. That does not signify either that the desire to escape despotism, coercion or ill treatment does not exist everywhere. Between the individual and the group, tensions may surge. That fact is indeed universal. But what is not at all universal is the belief according to which the best means of preserving freedom is to posit, in an abstract manner, an individual deprived of all his concrete characteristics, disconnected from all his natural and cultural affiliations. (66)

Ultimately this reveals the conflict that de Benoist seems in the evolution of human rights: human rights is an absolute that conflicts with freedoms because human rights requires strong and ideologically fanatically enforcement. The result is always “‘The emancipation of individuals…,’ observes Marcel Gauchet, ‘far from entailing a reduction in the role of authority…has consistently contributed to enlarge it.'” (83) As de Benoist illustrates, freedoms require a sense of community, while human rights destroy that community from within by their uncompromising divisive tendencies.

Arktos have chosen to issue this book in both paperback and hardcover with their usual attention to detail. There are no editing mistakes, but even more fortunately, the editors include numerous footnotes to concepts, phrases in languages other than English, and historical events so that the reader can peruse this book much as she would any modern text.

What is best about Beyond Human Rights: Defending Freedoms is that despite its gentle but persistent assault on a sacred cow, it leaves us with a sense that we may be able to find what we desire after all, if we only stop looking for it among the philosophical dead-ends that have enslaved us for centuries.