Back to Blood by Tom Wolfe 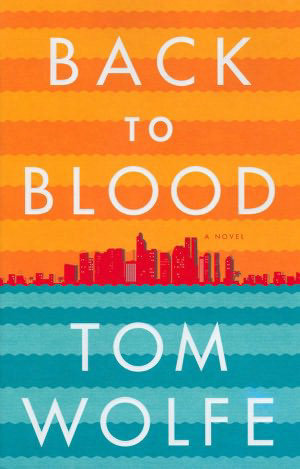 Schopenhauer says there are three types of writers. The first write for money; the second think so that they may write; the third type write because they have thought of something that needs saying.

For five decades now Tom Wolfe has been that writer who brings up what we need to think about, but would rather push to the back of the queue so we can get on with life. He takes our sublimated doubts and fears and, like a like a man finding a loose rope emerging from the edge of a circus tent, he gives a hearty yank to see what collapses.

Among his themes are three important ones for a modern era: first, how underneath a surface of normalcy there are many outsiders; second, how people rank themselves through status and identity; and finally, above all else, how people can become instant exiles through faddish shifts in fashion or trend.

The two men locked eyes for what seemed like an eternity…Triceratops and allosaurus confronted each other on a cliff overlooking the Halusian Gulf… until the big americano looked down at his wristwatch and said, “Yeah, and I gotta be outta here and bock on the site in ten minutes. You got a problem with that?

Nestor nearly burst out laughing. “Not at all!” he said, chuckling. “Not at all!” The contest was over the minute the americano averted his eyes, supposedly to look down at his watch. The rest of it was double-talk…trying to save face. (649)

In these lines of pursuit, Wolfe’s books are equal parts sociology and morality play. One of his first epics, The Pump-House Gang, provided an archetype for outsider literature to follow, besting the Chuck Palahuniaks and S.E. Hintons of the world with a story of a dissident group of outsiders and what that revealed about those who stayed inside. His most famous work, The Bonfire of the Vanities, showed Wolfe exploring how attitudes toward popular notions of egalitarianism determined rank in the new social hierarchy.

In many if not all of his fiction works, a protagonist or other is forced into an outsider role by something he or she did that offended the mob of others waiting in equality for a chance to pounce and thus, perhaps raise their own equality level a bit. Back to Blood is no different.The theme of this book is the clash of cultures, and how no matter what your background, you’re faced with a difficult choice between assimilation and identity.

While most reviewers praise Wolfe’s somewhat dramatic, beat-influenced experimental and bombastic writing style, this reviewer is glad that Wolfe has reined it in. Instead of focusing on the wordplay, he’s written some great scenes that would be equally at home in the theater or on the screen. These characters struggle with the concept of identity, and from that, a sense of the what-should-I-be-doing-with-my-life morality that common sense needs. He shows people in progress toward something they don’t understand, when they really want to figure out how to be themselves.

Naturally, this touches on some difficult areas and Wolfe does not spare us. His writing would seem polemic if it were not for the well-researched, diligently observed construction of an arabesque of details, and the accuracy of his many insights. Another recurring Wolfe theme, which is the failure of modern art to be anything but a theoretical object because it is devoid of meaning, features heavily in the plot but is done adroitly with characters offhandedly observing how strange and worthless it all is, at least once in gets in their way.

Wolfe is careful to spare no one. White Anglo-Saxons get a fair treatment in this, down to the ugly roots of a culture in freefall in which sex, drugs and megalomania have replaced any kind of actual goal. The ugliness of politics, the viciousness of cities, and the immensely fickle nature of people also get center stage. He has toned down his tendency to wallow in these situations, and instead lets them pass like pictures at an exhibition, leaving a lingering impression that our brains chew over for the next week or so.

A phrase pops into his head from out of nowhere. “Everybody…all of them… it’s back to blood! Religion is dying…but everybody still has to believe in something. It would be intolerable — you couldn’t stand it — to finally have to say to yourself, ‘Why keep pretending? I’m nothing but a random atom inside a supercollider known as the universe.’ But believing in by definition means blindly, irrationally, doesn’t it. So my people, that leaves only our blood, the bloodlines that course through our very bodies, to unite us. ‘La Raza‘ as the Puerto Ricans cry out. ‘The Race‘ cries the whole world. All people, all people everywhere, have but one last thing on their minds — Back to blood!” All people, everywhere, you have no choice but — Back to blood! (22)

What will make Back to Blood controversial is its theme: people are giving up on the politics of a hopelessly confused society, and reverting to their ancestral cultures. Borrowing a little bit from Samuel Huntington’s Clash of Civilizations, but setting it within the collapsing American nation-state, Wolfe also infuses his fiction with an almost Biblical sense of identity as the root of morality. His characters cast about looking for not just a role model but an actual culture, and this makes all of us unsteady as this book challenges our notions of what the future will look like.