Amusing Ourselves to Death by Neil Postman

Amusing Ourselves to Death: Public Discourse in the Age of Show Business
by Neil Postman
163 pages, Penguin Books, $8 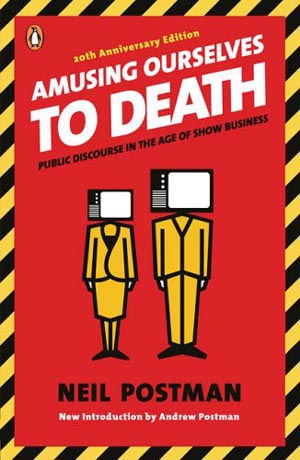 Postman begins this authoritative book with a supposition: what if our cultural future were not the direct totalitarianism we read about in George Orwell’s 1984, but the subtler corruption from within by the pursuit of empty pleasures that makes Aldous Huxley’s Brave New World all the more terrifying?

He gently refrains from reminding us that Huxley, writing in 1932, wrote the original; Orwell is popular because he took Huxley’s idea and transferred into an easy Good-versus-Evil story about a man’s quest for freedom. Huxley is more disturbing because he posits that the quest for freedom creates a stronger version of 1984.

His point is well taken. The Huxleyian order is after all, invisible; we make choices and think they are ours. No “Big Brother” exists for us to agree is an enemy and rally against. Instead, it’s just a vast sea of us, imposing our own defects on each other, with the result being a reversion of the lowest common denominator. Postman writes about this tendency, but zeroes in on television as the major post-WWII change in American society.

Amusing Ourselves to Death offers witty insights into the ways television has changed our lives, with a dark undercurrent of hinting that we have ventured away from the safe areas of the park after dark, and are now in the grey area where whatever hits us will hit hard without us expecting it. In educated but not pompous prose, Postman shows us the split between reality and fantasy, but more importantly, how we’ve stopped caring because our heads are full of the narratives of television.

He calls this corruption of our ability to see reality “disinformation”:

Nonetheless, everyone had an opinion about this event, for in America everyone is entitled to an opinion, and it is certainly useful to have a few when a pollster shows up. But these are opinions of a quite different order from eighteenth- or nineteenth-century opinions It is probably more accurate to call them emotions rather than opinions, which would account for the fact they change from week to week, as the pollsters tell us. What is happening here is that television is altering the meaning of “being informed” by creating a species of information that might properly be called disinformation. I am using this word almost in the precise sense in which it is used by spies in the CIA or KGB. Disinformation does not mean false information. It means misleading information — misplaced, irrelevant, fragmented or superficial information — information which creates the illusion of knowing something, but which in fact leads one away from knowing. (107)

The entire volume pulses with such dead-on insightful prose, in which Postman joins great essayists like Mencken and Wolfe in cutting to the heart of a matter, yet doing so in urbane banter that is both pleasant to read and informative in a quiet way that takes weeks or months to fully absorb. This is a book that is digested, not read and concluded linearly; it is “outside the box” of what is normally discussed in our society.

In fact, from the viewpoint of an entertainment culture, this book offers a curious insight on a society. In Postman’s view, as in Huxley’s, social motivations have replaced any kind of practical thinking. The result is a world with one imperative, which is the generation of pleasant fantasy to obscure its fears and the resulting hollowness of its experience:

For television — bless its heart — is not congenial to messages of naked hate. For one thing, you never know who is watching, so it is best not to be wildly offensive. For another, haters with reddened faces and demonic gestures merely look foolish on television, as Marshall McLuhan observed years ago and Senator Joseph McCarthy learned to his dismay. Television favors moods of conciliation and is at its best when substance of any kind is muted. (116)

Television, like soma (the drug in Brave New World which blissed away existential stress), is a pure pleasure vector. It does not deal with the disturbing, except to titillate or convert into pleasant emotions. Postman’s ultimate point is that television pretends to be an information medium, when in fact it is an emotional and marketing medium, creating a pleasant pretend world in which consumerism is the ultimate solution.

In this, Postman expands on Huxley’s warning: the future is not the type of narrative we see on television, but something entirely outside this false world. Perhaps our entertainment has misled us to expect an easy world of Evil Tyrants versus Innocent Consumers as we see in 1984, and while we’re distracted, the real decay has exploded beneath the surface.

The idea of religion | Accountability