A Vindication of Natural Society by Edmund Burke

A Vindication of Natural Society: A View of the Miseries and Evils Arising to Mankind
by Edmund Burke
61 pages, University of Michigan Press, $9 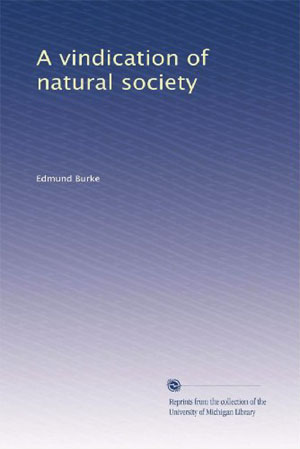 This short volume of Edmund Burke’s is probably not the best introduction to his thought because this small book is a mystery both to its critics and its creator. That is, while it was ostensibly written as a satire, the author’s treatment of it was ambiguous enough to suggest that he had some sympathies with its contents.

After he was caught and outed as the author, Burke updated the introduction to admit his deed, and gave as his reason the following: “The design was to show that, without the exertion of any considerable forces, the same engines which were employed for the destruction of religion, might be employed with equal success for the subversion of government.”

This book, which is a reproduction of the original 1905 plates printed by The Simple Life Press, offers more than satire. Written in the style of Lord Bolingbroke, and in mockery of the form of argument he would make, the treatise nonetheless argues against government and in favor of religion rather persuasively, which explains perhaps why thinkers have had trouble accepting it as completely satirical. And yet it is clear that it has satirical intent. One can imagine a certain kind of genteel but intellectual rage when Burke writes in the preface, “Do they pretend to exalt the mind of man, by proving him no better than a beast?”

With those words he gives us the key to this book. It is both a parody, and in a twisted sense of fair play, a use of the parodied writer’s voice to defend that which the parodied author originally attacked. Burke as a roots conservative sees himself as pursuing the beautiful, true and holy in life, and as such, he finds the moral ambivalence of Bolingbroke’s original works to be appalling. Hence he engages in a literary act which is akin to capturing Bolingbroke’s own fist and using it to beat his face while saying, “Stop hitting yourself! Stop hitting yourself!”

We get a glimpse of both the voice of the author and the actual purpose of this manuscript here:

Ask of politicians the end for which laws were originally designed; and they will answer, that the laws were designed as a protection for the poor and weak, against the oppression of the rich and powerful. But surely no pretence can be so ridiculous; a man might as well tell me he has taken off my load, because he has changed the burden. If the poor man is not able to support his suit, according to the vexatious and expensive manner established in civilized countries, has not the rich as great an advantage over him as the strong has over the weak in a state of nature? But we will not place the state of nature, which is the reign of God, in competition with political society, which is the absurd usurpation of man. In a state of nature, it is true that a man of superior force may beat or rob me; but then it is true, that I am at full liberty to defend myself, or make reprisal by surprise or by cunning, or by any other way in which I may be superior to him. But in political society, a rich man may rob me in another way. I cannot defend myself; for money is the only weapon with which we are allowed to fight. And if I attempt to avenge myself the whole force of that society is ready to complete my ruin. (50)

What’s going on here is complex. Both cannot be true that (a) Lord Bolingbroke took a skeptical look at religion and divinity and man and (b) that this satirical document accurately portrays his voice by having him speak up for “natural society” which “is the reign of God” in a positive way. At this point, we have left the satyrical voice of Bolingbroke, and entered upon the voice of the author, Burke. In this paragraph, he states his central thesis which is essential to all conservatives.

This thesis is that while the order of natural society and God is not ordained in orderly central planning and universal forms like the order of humankind, it provides endless options to achieve justice, beauty and goodness, where the order of man provides only one option that is imperfect as it is distant from truth. In other words, mankind’s order is more primitive than God’s/Nature’s, and the result is a sort of “average” result that does not allow the motivated and determined to achieve a better result, including the possibility of beauty and truth.

As he claims in the introduction, much of the work is Burke applying to civilization that same type of charges that were leveled against religion:

In a state of nature, it is an invariable law, that a man’s acquisitions are in proportion to his labors. In a state of artificial society, it is a law as constant and as invariable, that those who labor most enjoy the fewest things; and that those who labor not at all have the greatest number of enjoyments. A constitution of things this, strange and ridiculous beyond expression! We scarce believe a thing when we are told it, which we actually see before our eyes every day without being in the least surprised. (52)

Most of our readers will recognize the above as something we hear frequently from leftists/liberals across the spectrum. Here Burke has dropped back into his satirical voice, and is saying something absurd so that we recognize the absurdity of his method and thus are inoculated against it when it appears in another form, such as a jeremiad against religion.

If you find this confusing, you are not alone. This book has befuddled and delighted people for generations with its mix of parodic mockery of a writer the author considers to be a buffoon, and nuggets of wisdom spoken in the voice of a caricature so that we can’t see them for the naked truths the author believes them to be.

Witty, circuitous and yet cleanly logical, this book shows Burke at a crossroads as he tries to isolate his own thoughts on this subject. The result is probably best read by those who have an interest in politics and enjoy its nooks and crannies, but it motivated this reader to seek out more from Burke and place it on the bedside bookshelf.

The real crisis over Syria | What it is