by Jonathan Peter Wilkinson on December 27, 2021 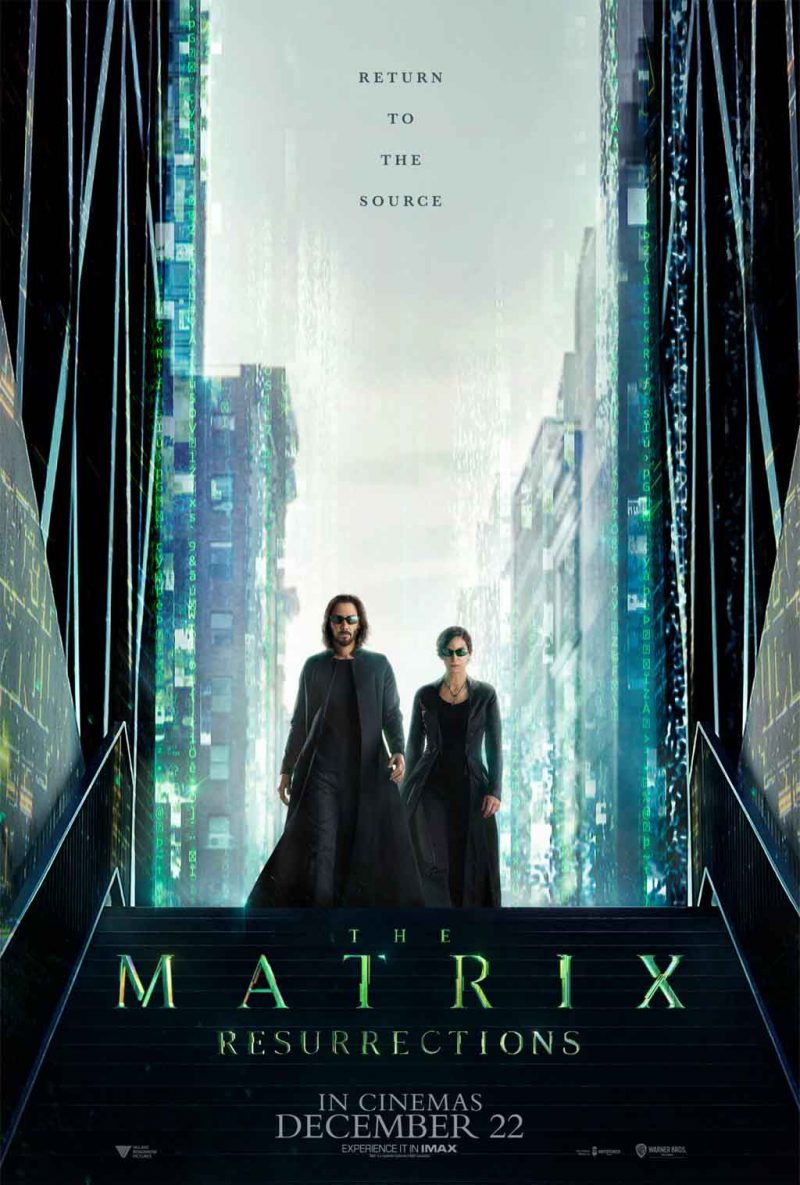 “I know what you’re thinking. I think it too,” Cypher told Neo. “Why, oh why, didn’t I take The Blue Pill?”

I posed this question after watching The Matrix Resurrections.

The Matrix Resurrections is the massively hyped sequel to the The Matrix trilogy that dominated sci-fi cinema from 1999 to about 2006. It brings back Carrie Ann Moss as Trinity. It unplugs Mr. Anderson (a.k.a. Keanu Reaves) for another run as a Cyber Ninja. The Merovingian comes back with a gang of thugs and curses in French as Le Un crushes his gang. The Wachowskies almost unretired Hugo Weaving and succeeded only in convincing him to continue identifying as Elrond.

This movie is not really a sequel. Sequels are never really as good as the original, but they can at least remain compelling and legitimate additions to a well-conceived and creative intellectual property. The first two matrix sequels were on this level. They remind me of an NFL franchise that follows up a Super Bowl win with at least a short trip to the playoffs.

The Matrix (1999), which was essentially a warmed-over retelling of Neuromancer, will remain in the historical canon of great American Sci-Fi. It has all the urgency, tightness, and artisanship of a cinematic masterwork. The first two follow-ups are not without their flaws. That stated, however, The Matrix Reloaded was watchable (once).

The Matrix Resurrections is a demented and poorly executed stroll down memory lane. It is not a competitive follow-up to a championship team. It’s more like the local municipal rugby club’s annual Old Boys Reunion Match. Nobody even pretends to be in full-on match shape. The “game” is more like a party and a social event. If you have not seen Frank for about 12 years, you would probably hold back from violently ejecting him from a ruck. They toss around a rugby ball instead of playing kickball to avoid looking gay.

Unlike The Matrix Resurrections, your typical Old Boys Reunion Match isn’t charging admission. The Matrix Resurrections should not either. They could have made it a YouTube Easter Egg hunt for Matrix geeks. Alternatively, Maybe the Wachowsky Things should have just bought everyone a few kegs and bonded. I am sure it was fun to make and everyone had a blast over at the fraternity house, oops, I mean movie set.

I may not be able to spoil a plot that barely exists. No one would be shocked to learn Neo and Trinity defeat The Washington Generals in the end and fly off into the sunset while rocking out to Rage Against The Machine. It’s a movie engaged in nostalgia. Predictability should not come as a surprise.

One positive aspect of the cinematic slog of a retread involves the actual nature of the new version of The Matrix. The world of The Matrix is essentially a fake civilization in real decline. Rather than The Architect, it now has The Analyst. It no longer has Agent Smith. It has Yuppie Boss. Trinity initially succumbs to a needy, demanding family. The barriers to individual freedom are dysfunctional social contacts, coworkers, and family relations. The Analyst needs no red-hot pokers. Hell is the boss, the co-workers, and the bratty little kids. The Matrix is now a Managerial Society.

Another possible strength involves The Analyst putting The Matrix on Fauci Lockdown. Like declining Amerika, The Analyst has his entire matrix throw a bratty emotional temper-tantrum. The Analyst literally expended people like rounds of ammo. They riot on cue and are compelled to throw themselves at Le Un from the top floors of buildings. It is a good metaphor for Crowdism, Demotism, and the utter disregard of humanity that sick and perverted Leftism brings to the fore. When everything is about feelings, it gets ugly when somebody powerful stops feeling the love.

Thus, The Matrix Resurrections gets beyond its own pretentious solipsism to make a couple of interesting conjectures. It makes them after it has also made a bunch of woolgathering puns and flashbacks to earlier movies. The entire production comes undone beneath the weight of its own reverent self-awe for previous installments. At least nobody proposes marriage to the residual self image in the mirror.

I’d give this about a 2.5 on a scale of 1 to 5. That would be grade inflation, but we would not want them to introduce us to another program named The Karen. Skip this movie. Keep the $10 or so in your pocket. The eighteenth Spider Man sequel The Matrix Resurrections competes against will at least keep your kids out of trouble for two or three hours.