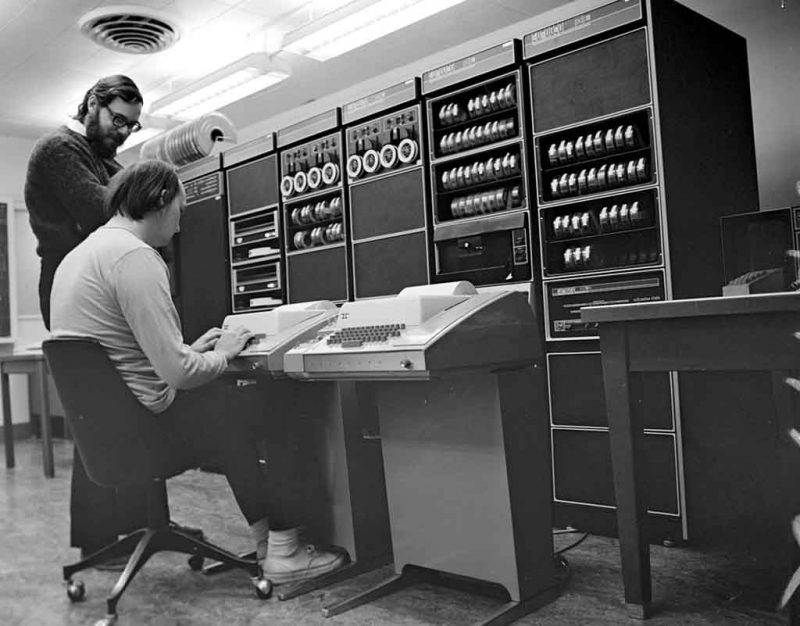 When computers first came into the public eye, many of us were fascinated by them because they could serve as reality models. Not just games like Taipan or Oregon Trail, where one lived out real scenarios, or even Game of Life, a simulator of unicellular organisms.

It was fun to write code to generate these scenarios, too, since once you set up the rules and parameters, the computer took over. Virtual models show us unanticipated layers to reality, meaning that after certain things have been achieved, something semi-contrary follows as the system gears up for change. Emergent properties and unintended consequences come from this place.

For those who have never mucked about with this kind of thing, computer models are not magic; they only reveal the world that you code into them, and if you forget a factor, you get wildly unrepresentative results. If your computer model of a farm forgets that plants need sunlight, and amount of sunlight varies through the year, whatever projections you get from that model will be insane garbage.

It seems that this fascination with modeling continues, because users have modeled Earth in Minecraft online:

Enter PippenFTS, a YouTuber who claims to have made a 1:1 scale version of the Earth in Minecraft for the very first time. It’s been made possible through the use of two mods, Terra 1-to-1 and Cubic Chunks. As explained by PippenFTS, Minecraft normally has a height limit of 255m, which would have made full-scale Earth terrain impossible. Using Cubic Chunks “changes the shape of Minecraft chunks to 16x16x16 cube, giving you infinite build depth in both vertical directions”.

The next stage is applying the Terra 1-1 mod, which takes information from geographical data archives (such as Google Maps) and converts it into Minecraft blocks. The video shows a number of vast landmarks realised in Minecraft, such as Mount Everest, the Grand Canyon, and Half Dome from Yosemite National Park in the US.

PippenFTS is hoping players will download the mods, rebuild specific areas in 1 to 1 scale, and then join them all together at the end using map editors. It’s a massive undertaking, but PippenFTS has started up a Discord server to help coordinate efforts, and is contributing by building Seattle. “Hardware limitations are ours, and certainly my, main obstacle towards achieving the dream of viewing Minecraft terrain thousands of miles in each direction from the top of Mount Rainier, but one day this obstacle will be overcome”, PippenFTS added.

Like symbols themselves, computer models let us make simpler representations of the world that give us a sense of more power. We can skim over the surface of a virtual Earth in seconds, something that would take hours or days in real life.

We can pretend, or imagine, scenarios and test them out using the model, much as one can daydream about vacations using a map. We can alter the model, and see what our grand plans would turn out to be without the risk and effort of doing this in real life.

Naturally, models have appeal in the same way that concepts, categories, symbols, and words do. These are our power inside of our minds over the world outside of us. We use mental models to understand the world, and play with it in our heads.

Years ago, a virtual world named WebWorld introduced many new web users to the idea of virtual models, creating an archetypal virtual world:

Aside from the ideas presented by Stephenson and Williams, the first breakthrough in the field was in 1994 when Ron Brevitch [ed: actually “Ron Britvich“] created WebWorlds [ed: actually “WebWorld”], predecessor of Active Worlds.

In the summer 1994, Ron Britvich created WebWorld, the first 2.5D world where tens of thousands could chat, build and travel. WebWorld operated on the Peregrine Systems Inc. servers as an ‘after hours’ project until Britvich left the company to join Knowledge Adventure Worlds (KAW) in the fall of that year.

In February 1995, KAW spun off their 3D Web division to form the company Worlds Inc. Britvich was eventually joined by several other developers, and the renamed “AlphaWorld” continued to develop as a skunk works project at Worlds Inc, internally competing with a similar project known internally as Gamma and publicly as Worlds Chat. While AlphaWorld was developing a strong cult following due in large part to Britvich’s open philosophy of favoring user-built content, Worlds, Inc. favored Gamma for the company produced contract projects for Disney and others.

On June 28, 1995, AlphaWorld was renamed Active Worlds (from Active Worlds Explorer) and officially launched as version 1.0. Around this time, Circle of Fire (CoF) was formed to create content for the Active Worlds universe. This company played a pivotal role in the future of the product.

The creation of WebWorlds was innovation. Everything we’ve seen between 1995 and 2008 is merely spin off.

ActiveWorlds looks a lot like Minecraft with nicer graphics: a chance to build, to create a human space, entirely in a digital zone that only possesses power because others treat this virtual space like a literal one.

In the same way that symbols cause mass manipulation, or social media creates a town hall type environment, virtual worlds bring people together in a simpler version of our world, using categories to eliminate extra complexity perceived to be unnecessary.

For example, virtual worlds do not model every bit of detritus and dust that blows through the real world; it is better to keep them clean, geometrical, and simple. This enables us to see objects only as they are relevant to our quest in the virtual world.

At the same time, this misleads us, because we have eliminated necessary parts of the model. Details conspire, after all, and when enough small things add up, they become a big thing. Like symbols and words, models only serve us when they do not unintentionally mislead us.