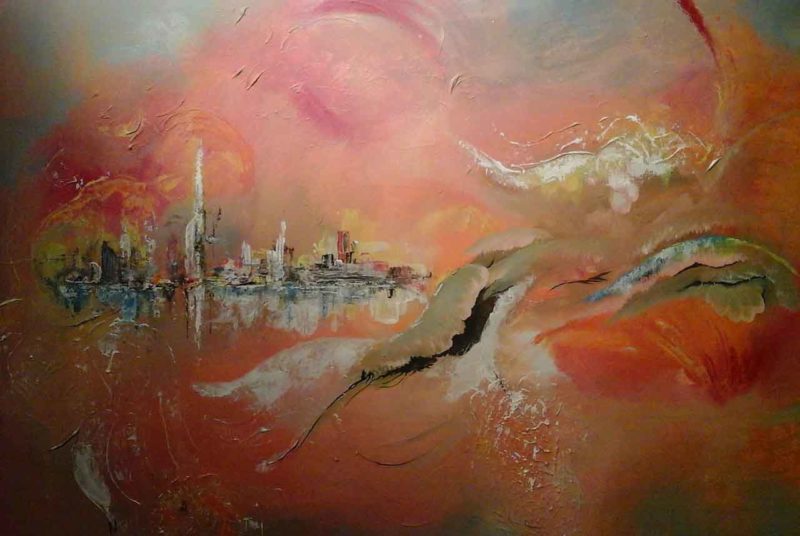 The rock sizzled, the meat atop it curling and shriveling as it fried. In another place, another setting, it may have been considered a delicacy. Here however, under the searing heat of the desert sun, it was merely an afternoon snack.

Neema, who had been keeping a watchful eye on her bounty from the relative safety of the tenting’s thick canvas, waited until the last possible moment before scurrying out and flipping the meat. A quick glance to confirm its progress, she then turned on her heel and returned as quickly as possible to the welcoming shade.

“Just another couple of minutes, grandfather,” she called over her shoulder.

“Take your time, child,” her grandfather replied from the mound of cushions he’d made his chair. “I’m not going anywhere.”

Neema nodded, her eyes scanning the sands and sky. It was troublesome enough to catch and cook her treat, she was not about to give it up to some opportunistic bird of prey or carrion feeder.

It was as her eyes travelled the horizon that she caught first sight of the hint of motion. Shielding her brow, she focused her gaze, studying the distant shimmer.

“Something is coming, grandfather,” she said solemnly.

“Oh?” her grandfather asked congenially. “Are you sure? Could it not be a mirage; a trick of the sun?”

Neema pouted; she wasn’t a baby anymore, and she hadn’t mistaken a mirage for something else in nearly four years, but still her grandfather enjoyed his gentle teasing of her for it.

“No,” she replied testily, “it’s throwing up dust, and it’s coming closer.”

Neema didn’t have to turn to look at her aging carer to know he was smiling. The old man loved to amuse himself with silly notions, despite the fact she had long since stopped playing into them.

“It’s closing too fast to be a dog,” she replied, her eyes watching the flicker in the distance, within which she could now see glints and gleams of reflected sun. “And it’s metal.”

“Hmm,” her grandfather replied, his typically resonant voice pensive. “A dog with a jet-pack maybe?”

Neema rolled her eyes, though her lips curled into a small grin nonetheless; she may not have played into the old man’s jokes anymore, but that didn’t mean she did not still get some enjoyment out of them. “No, grandfather, I think it’s a customer,” she smiled.

“My goodness, a customer!” her grandfather gushed. “Am I presentable?”

Neema risked a glance from their impending company, and her meal, to appraise her grandfather’s appearance. The old man, still garbed in his baggy night pyjamas, beamed a toothy grin at her, a single photovoltaic eye blinking rapidly closed in a conspiratorial wink. Giggling, she turned back to her sizzling rock. “Perfect, grandfather,” she muttered, her gaze alternating between the cooking meat and their rapidly approaching guest.

When their customer arrived barely two minutes later, it was with a purring thrum of slowing turbines. The speeder settled itself gently on the scorching sand, five and a half metres of gleaming, polished metal, a slice of sleek, exquisite engineering in the otherwise barren and desolate plain. Neema, her meat retrieved from her makeshift stove and clutched securely in her fist, studied the machine intently, her eyes roaming its smooth lines, examining the decorative embellishments, and noting with mild interest the high-end electro-magnetic rifle mounted on its hood.

“Careful, little one,” a lofty voice jibed, its owner emerging from the speeder’s cockpit with a hiss of hydraulics and a whoosh of depressurised air. “If you stare too long, I may have to charge you for the privilege!”

Neema turned to look at the man as he stepped down, the soft crunch of the sand muffled by his booming laugh. Beaming back at her, she watched as he affixed a large, golden sun protector atop his head, his hands brushing imagined dust from his soft and delicate robes.

From within the dark confines of the tent, her grandfather returned an affirmative nod, followed by a rate displayed with his fingers.

The man smiled, his head dipping genially as he reached into a pocket and withdrew a silken pouch. Tossing it in the direction of her grandfather, Neema could hear the clink of credit tiles.

It took but a moment for the old man to verify the amount, his deft and capable hands effortlessly cross-checking the tiles, and when he’d finished he gave her a nod. Her mouth full of meat, Neema refrained from replying and instead simply grabbed the fueling hose and moved toward the speeder.

“Careful,” their guest winked at her with a smile of gleaming platinum, “if you scratch it, I’ll expect a discount.”

Neema bobbed her head courteously; every customer they had seemed to come up with roughly the same pseudo-joke, and every one apparently thought themselves original and hilarious. It didn’t seem to matter that she’d never so much as grazed a guest’s property in all the time she’d been entrusted with the pump.

The fueling nozzle in place and locked, she gave her grandfather a quick thumbs-up. At her sign, the old man threw a switch, and chilled liquid hydrogen began surging from the stores beneath their feet and into the speeder’s fuel tanks. The hose, heavily insulated against the icy substance now flowing through it, as well as the searing rays of the sun, writhed and expanded for a moment in the harsh light before settling.

Neema, satisfied her work was done for the moment, carefully chewed a mouthful of her afternoon’s culinary exploits and then swallowed. Turning her gaze once more to the speeder’s owner, she found him studying her uncomfortably. Uncertain, she held out her meal to him.

“Care for a bite?” she asked, hoping this was the polite and socially acceptable thing to do.

The man gazed at her offering, his lips twisting into a grimace, and then waved her away irritably. “No,” he replied, making no attempt to hide his revulsion, before turning his attention from her imperiously.

Neema, despite the fact that she hadn’t really wanted to share her treat, was still hurt that something she’d worked so hard over had been rejected so brutally. Moving away from the speeder and their guest, she retreated into the cooler confines of the tent and settled herself up against the pillowy seat of her grandfather.

“Everything okay, Neema?” her grandfather asked, his lips curling around a freshly lit hookah pipe, the rich scent of the flavoured tobacco already wreathing him in its embrace.

“Yes,” she replied sullenly, her eyes lingering on the lustrous speeder, and its equally gleaming owner.

Her grandfather puffed leisurely on his pipe, his artificial eyes studying her carefully. Silence passed between them, and Neema knew that the old man was waiting for her to confide in him. Ordinarily, she’d rise to the challenge and hold out as long as she could, a game created out of how long each could maintain the silence, however in that moment she didn’t feel like it.

“Grandfather,” she asked, working to put her thoughts in order, “why do some people have power, and others don’t?”

Her grandfather raised an eyebrow. “Oh? And here I thought you were just going to ask why some people had no manners.”

Neema shook her head. In actuality, that had been one of the first questions on the tip of her tongue, however she’d noticed a similar trend in the majority of their customers and she’d found her thoughts attempting to identify a common factor.

Her grandfather smiled and placed a loving hand on her shoulder. “Neema, would it surprise you to know that you and your doddering old grandfather, despite what you may think, are both richer and more powerful than almost all of our ‘esteemed’ visitors?”

Neema frowned, her eyes never leaving the regal figure of their customer as he stood imperially beside his property, his attention no doubt engrossed on loftier things. He was too far away to hear their conversation, though she suspected that were he not he’d have most definitely had some things to say regarding her grandfather’s ludicrous statement.

In his absence, and with no challenge forthcoming, her grandfather continued. “He may have a fancy vehicle, but he requires it because he is not powerful enough to remain in one place. He dresses in gold and finery, but that is because he must go out of his way to display his wealth and inform potential observers of his station. He speaks authoritatively, and rudely at times, but this too is simply window dressing so as to convince others that he deserves to be listened to in the first place. And he refuses your offering, because he does not possess the knowledge or ability to see it for what it really is.”

“We, on the other hand,” her grandfather smiled, smoke curling from his lips and drifting lazily up through his thick eyebrows, “have no vehicle at all, because we have nowhere to be; instead, people come to us. They go out of their way to do so, because this is where we have chosen to be. So too do we have no need to clothe ourselves in the appearance of power or wealth, instead prioritising comfort and ease; in spite of this, all who come to us know the power that we hold. Were we to refuse their requests of us, they would surely die out here, the sun snuffing out their lives with a deadly poise that it’s had millennia to perfect. Their riches cannot save them; only our good grace has that power. A grace, I might add, that requires no speech at all. We simply move our head one way or another, and show them our price; one which they will gratefully pay.”

Reaching out a hand, her grandfather gently pried a stick of fried lizard from Neema’s fingers. “As for this,” he said, taking a slow and savouring bite of the treat their guest had rejected so forcefully, “to me it tastes of friendship, made all the richer for it was offered at no cost at all.”

Neema allowed herself a tiny smile, her eyes blinking rapidly to prevent them from watering.

“Your name, Neema,” her grandfather continued, his hand tender and warm on her shoulder, “means ‘one born in prosperity’. Recognise what you have, and learn to see what others merely claim to possess.”

She watched as her grandfather turned to gaze at the speeder, their guest now fidgeting in his sumptuous clothes under the blazing, unforgiving heat of the afternoon sun.

“Nothing but a mirage,” he muttered, his expression calm and untroubled. “A mirage.”

Did Anti-Drug Propaganda Set The Stage For Political Correctness? | Man Without A Nation