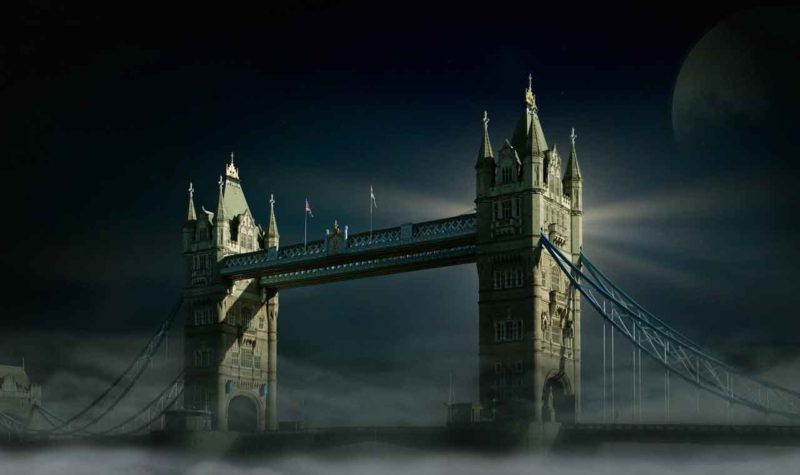 Jack raised his head to look over the Thames, his eyes fixed on the broken surface of the rushing river – the great bell known as Big Ben, now lay on its side, half submerged in the murky water.

Surrounded by the wide-open expanse of what remained of Westminster, rubble strewn around their feet, Jack sat with his fiancÃ©e, Laura, struggling to put words to recent events. Looking out from the Southbank, it was almost impossible to imagine that, until recently, their view would have taken in the imposing Gothic Revival Palace of Westminster and the iconic Elizabeth Clock Tower that housed that once great bell. Their view was no longer obscured by towering buildings, but by fractured structures and dense debris that had become the morbid tombs of so many Londoners, colleagues and leaders, strangers and friends.

â€œWhere did we go wrong?â€ asked Laura, tears forming at the corners of her eyes.

â€œWe were alone,â€ Jack said, taking his eye off the destruction to look down at his tattered trainers.

The couple had been out of the city, travelling to Lauraâ€™s family home in Maidstone, when they had struck. Initial reports had been confusing and contradictory. The BBC had laid the blame at the feet of a rogue nation, citing evidence of increased military activity in the East, while Sky News seemed more convinced of an attack from an old ally given the recent collapse of nuclear disarmament negotiations between the UK and the EU. While these initial reports were clearly reactionary, the dramatic news of explosions and public panic came thick and fast. St. Paulâ€™s Cathedralâ€™s great dome collapsing in on itself, or the sight of the London Eye falling from its bindings and tumbling into the Thames. Each report felt like a knife to Jackâ€™s heart, and with the images seared into his memory the televisions cut out and all lines of communication were lost.

â€œWhat do you mean?â€ Laura asked, moving her arm across his shoulder attempting reassurance. As she moved closer she noticed a creaking noise rising from the east. The noise rose to a crescendo before a large section of the fallen London Eye broke from the main structure and was dragged past them down the raging river.

â€œWe could have been prepared, we could have stopped this.â€ Jack said as the remnant was caught on a downstream pier.

Jack looked again at the remains of the Palace of Westminster, home to the Houses of Parliament for generations. He had been proud to serve his constituents and country in those hallowed halls these last eight years. He was elected on the back of a call for renewed communication between the UK and its former friends, the EU and US, to represent Hackney South and Shoreditch as their Member of Parliament. His Inclusion Party had few seats, mainly made up of liberal London boroughs, but his hope was that lively debate and a return of common sense would prevail to open Britainâ€™s dialogue with the world again. Perhaps he had been foolishly optimistic.

Laura could sense a growing feeling of guilt seeping into Jackâ€™s words. â€œHow? They came a great distance to do this to us. To take what they needed,â€ she said.

Jack turned his head to look at her, their trek back to London had been difficult and it was clear on her face. Dust and sweat, mixed over the days since theyâ€™d been forced to leave their car on the outskirts, shadowed her face emphasising her worry lines.

Back in Maidstone, before they had started their journey, Lauraâ€™s mum was beside herself with fear. She held Lauraâ€™s arm tightly, with tears in her eyes, pleading for them to stay. While Laura was reasoning with her mother her father had to pry his wifeâ€™s fingers from his daughterâ€™s arm. It was in those moments that Jack had told Laura she should stay, let him go back alone and she would stay with her parents. She didnâ€™t listen, she couldnâ€™t let him go alone, for years theyâ€™d been inseparable and that would not change now.

Theyâ€™d expected to see British armed forces early in their journey so, with their help, Jack could link up with surviving Members of Parliament. The reality of the situation was quite different. They had struggled to avoid groups of civilians armed with all manner of makeshift weapons who seemed to have initiated their own style of law in the suburbs.

This was a desperately frightening time for them both. Jack came face to face with a group of civilians while searching for food.

â€œHey, isnâ€™t that the guy from Inclusion?â€ a large man with baseball bat in hand shouted.

The other members of the group turned to look at him. He saw recognition appear on their faces one by one. The recognition soon turned to anger.

â€œThis is your fault! Youâ€™re supposed to protect us!â€ came the shouts.

Jack had to turn heel and run, each stride enhancing the growing feeling that this was somehow his fault. He was able to escape on this occasion but things werenâ€™t going to get any easier.

Despite the dangers it was important that Jack, being one of the few MPs to have been out of London at the time of the attack, return to find the remnants of the elected government and begin the act of rebuilding.

â€œOthers would have known what was happening, we could have been united against this. The Americans must have known, or the Russians. They have the capability to monitor up there, to warn of a threat,â€ Jack said, hands bunched unconsciously into fists in his lap.

Laura shrugged. â€œHow would that have stopped what happened Jack? They were just too advanced, too powerful.â€

â€œWe made our bed a long time ago Laura, we voted to cut off ties, to leave the world economy and isolate ourselves. The public were manipulated by a campaign of fear, pushing them towards protectionism, feeding them the illusion that control of our borders brought security.â€ He looked down at his feet again, fighting back his own tears of anger and pain.

â€œAll we did was push away the people that could help us. United we would have been strong, we could have prepared and fought. Alone we were weak and vulnerable.â€

â€œWe didnâ€™t vote for that Jack, others did. You did your part to make them understand.â€ Laura replied.

â€œI should have worked harder to convince them.â€ He said.