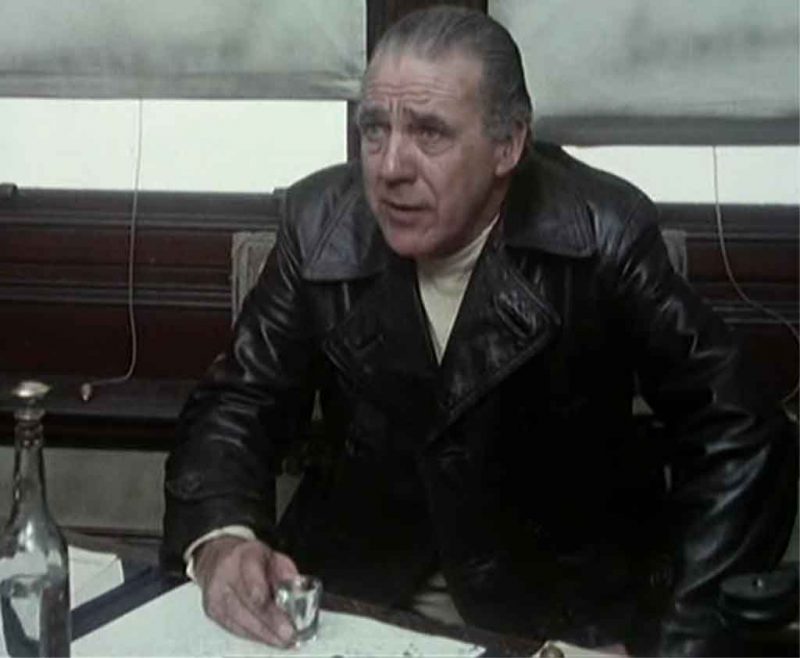 We are fortunate at Amerika to be able to present the second installation of the exciting dystopia saga, Crosses & Double-Crosses by Clayton Barnett. You can find your copy on the Jungle River store, but first, read this week’s segment of the story, “Banality.”

They watched his head pull back in.  The window, like most, she saw now, stayed open.  No air conditioning, she guessed.

Just inside, a man with a rifle over his shoulder detailed another armed man to take them to… what was it?  Yes:  Deputy Director Stephens’s office.  From what Rupert said in his little talk, this man is a cousin of Barrett’s.  That blood tie could be more important than any law enforcement or Civil Service pension…

“<This… this is going to be political,>” Sylvia continued in Tagalog, “<so try to focus on eating and not talking, please.>”

“<You are so full of yourself sometimes!  Fine!>”

Their escort rapped on the old wood door twice.  The man they had seen from the courtyard opened it himself.

“No time or money for secretaries, Miss Fernandez!” he said to her start of surprise at having been read so easily so quickly.  “Didn’t mean to upset you; I’ve been in the Ranger Division my whole life.  Reading faces is second or third nature to me now.  Please, please, let me move some of these files so you two may sit!”

Sylvia had been in law offices in Manhattan and Manila where the decor was flatscreens and uncomfortable stainless steel chairs.  This office looked like something out of detective B-movie from the 1940s.

“Computers not working?” she asked, waving for her sister to take the seat to the left.  She saw him pause and look around wondering what to do with the foot-thick stack of files in his hand.  With a sigh, he finally just set them on the floor in front of the window he’d leaned out to greet them.

“Less and less,” he agreed, dropping into his ancient wooden chair with an ominous creak.  “A fine compromise, as our Director pointed out:  with no one to maintain database integrity against outsiders, paper is our most secure media right now.”

“That… that’s surprisingly sensible,” Sylvia agreed, having done something very similar while on Leyte.

“Where are my manners!” he suddenly called, standing back up.  “I’m Kyle Stephens…”

Introductions were still going on when there was a kick to the door.  Waving at Stephens, Sylvia opened it.  The kick was because the homely older woman standing there had her hands full holding an aluminum tray with various meats, cheeses, and vegetables.  And a clear bottle with no label in the center.  Without a word she moved into the office and balanced it onto a four-inch stack of files in the midst of Stephens’s desk.  Still silent, she left.

“Operational security,” the man replied with no smile at all.  “We deal with thousands of lives – and deaths – daily in this building.”

“Not at all,” he said pulling a drawer open at his right and producing three shot glasses.  Those set before him, he took the bottle and proceeded to top them off.  Seeing Roberta’s mouth watering, he smiled benevolently.

“Just a quick toast, young Miss!  Then feast to your heart’s content!” he said, passing two of the glasses over.  He lifted his glass but a cloud seemed to come over his eyes.  Before Sylvia could ask he continued.

“Here’s to us!” he said, tossing back the entire glass.

Sylvia saw her little sister hesitate, not getting the social overtone here.  With a flick of her eyes, she indicated she should do what they do.

“I’ll drink to that,” Sylvia said, drinking the nearly two ounces – of vodka! – all at once.  She clenched her teeth to keep it down.  Her breathing back under control she leaned to whap Roberta’s back until she could breathe again.

“From what I’ve heard you two are just back from the Philippines,” Stephens ventured.  “How are things out there?”

“Duterte’s hand-picked successor continues to move from strength to strength,” Sylvia said, taking some sliced carrots and cauliflower to try to clear her palate.  “It was only because of our family connexions that I was there to help prosecute some of the last Islamist rebels.”

“However,” she continued, “the Chinese continue to press their claim on the reefs of the South China Sea.  Given what we’ve seen of two days back in America, it may be there will no one to stop them anymore.”

“I’d say you are quite correct, Miss Fernandez,” he immediately agreed.  “Your old country will fall under their hegemony.  If Japan, South Korea, and Taiwan have any political leadership worth a damn I hope they are assembling nukes just as fast as they can, before they become provinces of the Middle Kingdom.”

Just able to start eating without getting sick, even Roberta looked up at this shocking declaration.

“And how was Dallas?” he asked, picking up a piece of paper from his desk.  “Y’all had some trouble there?”

“The robbery attempt was of little concern,” Sylvia said with a look to her kid sister.  “Alan, that is, Agent Rupert told us that the city center is on fire and about to overrun by cannibals.”

“Oh, what a desperate time we live in!” Stephens cried in mock seriousness.  Did the drink affect him?  She thought not.

“And things in your new proto-state?” Sylvia countered, leaning forward just a little.  “Armed men everywhere is an admission you do not have control of events.”

Hungry as she was, Roberta froze.  After half a minute they watched the man retake the bottle and pour himself more, not offering them any.  He took a sip and seemed to stare at some point just over their heads.

“ExComm, formally, has only been going for two months but in that time we’ve managed to put together the biggest gang of nasties you’ll ever see this side of Hell,” he began.  “I and several others that came over from the Ranger Division have the experience that has seen us move into the upper positions with meteoric speed.”

He let his eyes come back to theirs.

“Although there is some overlap, the Second Chief Directorate exists to assist the Field Forces with maintaining our frontiers on the west, north, and east… by and large,” he went on.  “I, and my men, thankfully have had little to do in this unfolding catastrophe before us.”

“From what Rupert told me,” Sylvia said, just picking up a piece of yellow cheese, “you should be focused on your southern border!”

“We are!” he said, taking a drink.  “That, and the city cores are for First Chief Directorate and the… interesting mix of men we have there…”

His eyes drifted up again.  From her times in courtrooms, Sylvia recognized a denial/coping mechanism.

“The methods of that Directorate are much… harsher than most people know.  Can know.”

No one spoke as Sylvia consumed her small block of cheese.

“Mister Stephens?  Why am I here?”

She saw him glance at the clock on the wall to his right.

“To speak with Director Barrett in fifteen minutes.  He’d like to offer you a job.”

“What?!” Roberta finally spoke up.

“While I do know something about the legal side of suppressing insurgencies, I don’t see what I can do for your two Directorates – ”

“You’d be in the Third, as Assistant to the Deputy Director,” Stephens replied, his eyes coming back down.

“And what does this ‘Third Directorate’ do, Mister Stephens?” she asked with some exasperation.  Her jet lag was catching up to her “end-of-the-world” tolerance.

“Counter-intelligence.  ExComm already has a sword; it seems my cousin wants you as our legal shield.”

Sylvia just stared at this man for a moment.

“I am flattered, Mister Stephens, however except for some warm, moist towels in business class, this is my third day without a bath of any kind!”  She elevated her forearms.  “My clothes are wrinkled almost beyond recognition and you want me to have a job interview with a man who sounds like a cross between Attorney General and FBI Director!”

“That’s how things are here, Miss!” Stephens said, standing and making a small wave to Roberta.  “You just stay put and eat!  There’s a bathroom out the door and left, at the end of the hall.  Just… er… don’t wander anywhere else, please.”

He stepped around Sylvia and held the door open for her.

“Fine!” she hissed, standing.  “But I get five minutes in that bathroom of yours!”

“Not a problem,” he replied as she passed him.  “The Director’s office is on the ground floor.  You walked right past it before you came up the steps!”

“But,” she paused, “I would have thought the top floor… a corner office…”

“That’s not how the Director thinks; if he wants to see someone, he sees them immediately.  If he has to leave in a hurry, the door’s right there.”

Against her conscious will, Sylvia realized she was liking more and more the good sense of a man she’d never met.

“I see.  Thank you.” She turned and made her way quickly to the bathroom, leaving their host just outside of his office.  He seemed to be telling Roberta that there was a better breeze with the door open…

Sink, toilet, mirror.  And it had not been cleaned in some days:  the reek of urine in the central Texas heat was strong.  She’d been in worse, both in the US and the Philippines but would have thought a new organization such as this would have done things better.  She pulled a small makeup kit from her coat pocket and tried to make minor repairs to her hair and face.

Or, she thought, is it that their priorities lie somewhere else?  If so, that’s to be commended.

Four minutes later she shut the door behind her and rejoined Stephens.