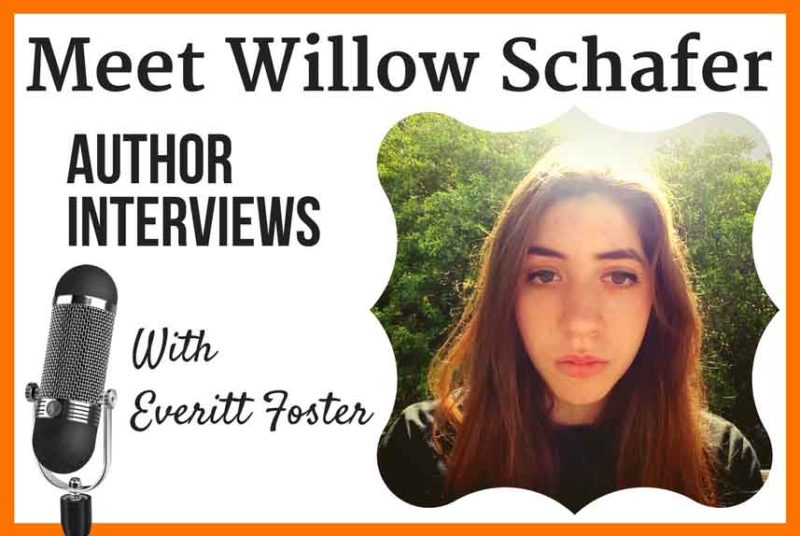 1. Tell us a little bit about your background, where are you from, what was your family like? Were you always creative, or is writing something that you recently discovered?

I was originally born in Ohio and I grew up in the country on a 10 acre Christmas tree farm. Nature had a big part in my upbringing because when I was little, my brother and I would go out on the land and pick wild blackberries and grapes, or go out into the forest and see how lost we could get before my parents called us back. I have a huge family, and in fact, my grandmother and some of my uncles lived just next door to me. Whenever Thanksgiving or Christmas came around, the house would be packed. When I was about 10 years old, my family and I moved to Florida, which was a big change for me. I think I always had an interest in writing, because one of my earliest memories is when I tried to rewrite the entire Websterâ€™s English dictionary. I started writing my first fiction stories when I was around six or seven years old, but I started becoming more serious about writing novels when I was about twelve or thirteen.

2. Were you a reader growing up? It seems most authors Iâ€™ve spoken with had a deep love of reading even as a child, almost to the exclusion of all else.

I started reading when I was about three years old, and I havenâ€™t stopped since. I was the kid that walked out of the library with a stack of books so tall I could barely see where I was going. Whenever I would go out with my family in a car ride, even if we were just driving down the street, I would always bring a book with me. I really have no preferred genre, and I love fiction and nonfiction equally. Really, one of my favorite parts about writing is the research I do before typing out a single word. Depending on what Iâ€™m writing, the research could be anything from books on robotics, religion, neurology, history, and even poems. My parents often had to tell me to stop reading and go outside to get some fresh air, but I still usually brought a book with me.

3. What are some of the books that most influenced you as a writer, and as a person, and how?

So many books have left an impact on me that itâ€™s hard to think of any particular piece of literature. Some specific books I can think of that have influenced my writing are Game of Thrones by G. R. R. Martin and The Stranger by Albert Camus. Game of Thrones really helped me understand how to write characters with multiple dimensions and several different perspectives, while The Stranger gave me a sort of darkened, introspective outlook which has stuck with me. Some other books that really stuck in my memory are The Great Gatsby, and a lot of cult classics like Danielewskiâ€™s House of Leaves. Iâ€™ve always loved stories that have deeper meanings and are stuffed with symbolism, because so much can be told even in subtle, indirect sentences.

4. Your story Enigmatic Heartache really caught the attention of the readers of Uprising Review for a variety of reasons. Personally I think it has a wonderfully beautiful style. How long did it take you to develop your voice, and how has your voice as a writer changed since you began?

I think a writerâ€™s style is always evolving and improving. When I think back to how long Iâ€™ve been writing, I realize that Iâ€™ve really developed my voice only recently, maybe in the past few years. I can see how my writing style has changed by reading some of my old works and cringing compared to my work now. The voice in some of my older works seem to ignore a lot of complications and complexities that are found too often in the real world. Now, my writing style I think has taken on something between gritty and smooth, because I tend to enjoy writing prose that highlights a dark, harsh reality contrasted with a romanticized choice of words, which may have developed when I was reading a lot of poems by Sylvia Plath.

5. What do you think of classical writing programs such as a BFA or MFA in writing? Do you think they are necessary for some people but not for others? Is there such a thing as â€œtoo much educationâ€ for a writer?

6. What is your writing process like? Take us through your day when you write.

I donâ€™t really have a specific process of writing. Iâ€™m a college student so I donâ€™t have quite as much time to write as I used to, but once I get my work out of the way, most of my free time I dedicate to writing. I donâ€™t set a specific time to get myself to write. Writing is more like a compulsion for me; I canâ€™t live without it. Sometimes I can write for hours on end. I always listen to music when I write. Sometimes I listen to particular pieces of music to fit the mood of whatever Iâ€™m typing out, but sometimes itâ€™s just whatever I find catchy at the time. Generally I like to write when no one else is around, and I might open the windows to let in some fresh air, or Iâ€™ll make myself tea or coffee.

7. What topics or themes do you find yourself coming back to time and again, and why?

Looking back on some of my written works, I notice that there is often some dark or odd theme involved. Topics I find myself returning to are usually quite terrible, and I tend to lean towards whatever can psychologically scar a character the most. Iâ€™m hugely interested in psychology and the many dimensions of the human (or mechanical) mind. Iâ€™m fascinated with how much trauma a mind can take before it collapses in on itself and looks at the world in a different way. I also think I lean towards more uncommon themes, whether the themes are romantic, environmental, introspective, emotional, or otherwise, because I am exhausted of stories that are too afraid to get their hands dirty and delve into subjects that not everyone might be ready to accept.

8. The old saying â€œwrite what you knowâ€ keeps popping up on writing advice blogs. How do you interpret this? Should women not try to write men, should whites not try to write about Asian cultures? What does it mean to â€œknowâ€ something well enough to write it?

This is a saying I have mixed feelings about. The definition of â€œknowingâ€ something well enough to write about it will differ from person to person and is really quite vague. I think a person can write about anything just as long as he or she does the research first. For instance, if a white person wants to write about Asian culture or some other subject that is completely foreign to them, they must be committed to learn about that culture or subject before setting out to write it so they can avoid stereotypes and false interpretations. If a mechanic wants to write a medical drama, thatâ€™s great, just as long as theyâ€™re willing to learn about medical terminology and such. However, if someone just wants to try and whip up a story about something they know nothing about without studying it, they should probably just stick to the things they are familiar with instead.

9. Writing is only half the battle for a writer these days. Whether you go indie publisher, self-published, or major publisher the author will have to do much of the marketing and promotion him or herself. How do you view that aspect of writing and what tools help you to build your brand and expand your audience?

The process of publishing I think is gruesome for any writer, just because the competition is so fierce. Writing really is the easy part, because publishing has all the responsibility that not every writer might be willing to handle. I think social media is a great way to promote yourself, as well as writing forums. Writing conventions are also great places for a writer to expose themselves to agents and the process of publishing so theyâ€™ll have a better idea what to do if they plan to publish their own work.

Some of my writer friends are annoyed when I tell them that I get inspired by literally anything. Iâ€™ve found inspiration when reading through a comic book, in the reflection of a puddle, a branch of a tree blowing in the wind, a large number of books and TV shows, introspective quotes, and I was once even inspired by a gasoline commercial with particularly interesting cinematography. Sometimes even when Iâ€™m not thinking about writing at all, some groundbreaking idea will pop into my head. Inspiration is not really something I can control. Sometimes it fades out for short periods of time, but when I read or hear something that really fascinates me, inspiration flows like water from a broken faucet.

Check out Willow’s story Enigmatic Heartache. You can also find her on Twitter @WillowSchafer27.