Amerikan Decameron – Story I: Shooting At Nothing 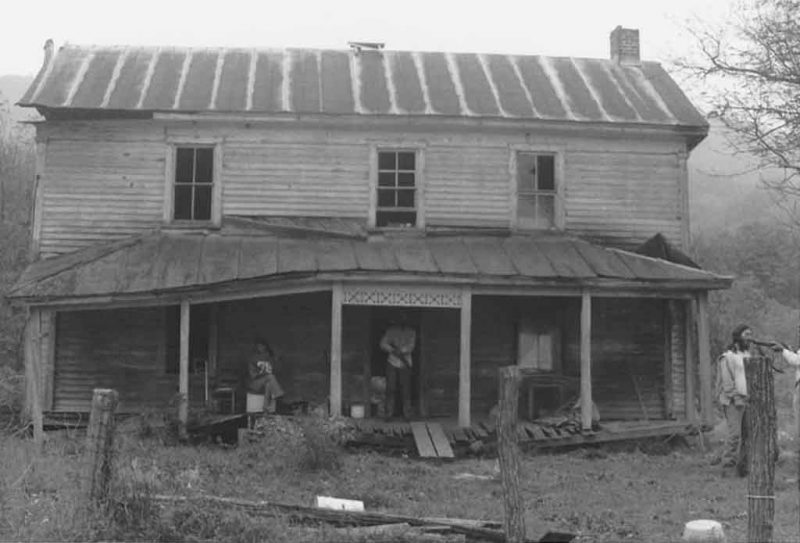 Historical Note: In 1348, a great mind of the Florentine Renaissance, Giovanni Boccaccio, got to live The Black Death first hand. He survived and the muse sang to him dark music. So much so that he composed a work of short stories that were told over ten days while a fictional group of survivors self-quarantined to avoid Bubonic Plague. While I’m on exile from my office, I’ll see if I can pound out some stories of my own in honor of the scholar and survivor who, along with Geoffrey Chaucer, helped make the short story collection a staple of fictional literature.

A lot went into hitting the fifty meter target. It started with the archer’s foot position. Then the legs had to be just so. The bow staff arm had to be rightly positioned so that the drawing arm could pull back the bow string to where the arrow nock almost touched the cheek.

Corbin Taylor could feel the plastic fletching flush to his face as his gimlet eye stared down the shaft. His breath had gathered in his lungs. His fingers let go, the shaft set sail the fluid river of nitrogen, oxygen and trace gases separating the point and pile of his missile from its intended new home. His breath escaped, his form relaxed. Corbin listened for that satisfying thunk of impact. He had to listen just a tad more closely for it at fifty Meters instead of thirty-five.

“Rat turds!” He exclaimed in half-amused disgust. His shaft had lodged precariously in the target. It hung at a downward cant with its point embedded four inches over paydirt and what Uncle Ray would call a fine, red twat hair off to the left. It had to be about the fourth quiver of twenty he’d unloaded at fifty meters and this was still his second paper target. At thirty-five meters, he’d mangled the center of two similar targets to the point where additional bull’s eyes could no longer easily be adjudicated with only one quiver-full.

Aunt Laura looked at him with the patient annoyance a disowned nephew foisted upon his Aunt and Uncle could expect and get used to. “You shooting at nothing again, Corbin?”

“Ma’am, I don’t seem to be hitting much.” Corbin modestly conceded. “This new range is a bear.” He continued as he noticed the repetitive stress pain in the elbow and forearm of his drawing arm.

“Can’t do no Math or Reading neither according to Mrs. Frankle.” She hectored further. “She just loves how Wuhan Buggy means you aren’t in her class for at least two weeks. You may as well just shoot at nothing, except I need you to chop some wood for the stove.”

“Yes, ma’am.” It was take the crap or have it smacked clean out of you with Aunt Laura. He’d chop the wood, Ray would cook whatever he’d fished out of the creek or put an arrow through in the woods out back. Laura would complain how he couldn’t clean or cook game properly. Everyone had their role in life’s rich pageant.

Corbin spent about ten days the way he’d spent the first one. The email went unchecked, the school work he was supposed to be caring about during Coronavirus Lockdown was too utterly forgotten to count as an afterthought. One thing changed as he continued shooting at nothing. He started hitting it way more often. The target was probably close to eighty meters now. He’d run out of open yard near the house and he wasn’t dead certain of his pace count to be leadpipe-lock certain.

Uncle Ray offered his half-drunk grin of understated appreciation. “It would sure enough suck to be the center of that target.” He observed in a plume of Wild Turkey breath. “I might have to show you something tomorrow if you can shoot like that.” He sauntered off like he was proud of Corbin or something. That was a rare and satisfactory occurrence for the perpetual unwanted guest that had been found abandoned by Sheriff Eddy in Aunt Laura’s Sister’s house trailer.

“Dress and grab you some eggs” was about as close as Uncle Ray had ever gotten to telling Corbin “Good Morning.” Contra Aunt Laura, Ray Hulberson could rightly poach an egg. And then add just the right mix of salt and pepper. It was an underrated art. Like the time he’d shown Corbin just how big a pinch of Skoal should be. Nothing ever quite came perfect, but Corbin had wised up enough to shut the ratchet-jaw and enjoy the things that made it on over to good.

Corbin wore his hunting camo. Ray didn’t roust him at 4:05 to wear anything else. He was going where Ray went to procure the family food supply once his game tags were exhausted. Corbin would be too street-smart to legally admit it, but today he wouldn’t be shooting at nothing. Like two characters out of Deer-Hunting With Jesus, he and Ray would go poaching to live.

The woods behind Ray’s house were some guy’s property. They just went unused, unmarked, and unobserved. Perhaps the owner had no idea his deed even existed. Perhaps that person had preoccupations that precluded any particular concern. God’s Creatures used it as a stadium in which to wage their violent game of Survival of The Fittest. They all played the hardest hardball. Even the peaceful appearing trees grew in phototropic warfare to block out the neighbor’s photosynthesis supply. Uncle Ray had come to play a similar game. Everything with a least one living cell preyed on something out here.

Ray had the terrain scoped out with a familiarity. He had concealment from the Game Wardens’ helicopter above via the forest canopy. The roll of a line of gentle hills rendered the nearest hardball road invisible over to the right. He had done his tarp shelter up like a ghillie suit. As long as he didn’t either stink or move, an animal would have to get close before they could spot him. Guns made noise that revealed a poaching stand. His preferred weapon in this circumstance was a finely-maintained composite bow.

Corbin had gained a similar lethal proficiency with a similar weapon. Not as fancy. Not the same tension force from draw. He got down low among the leaves under Uncle Ray’s tarp. He tried to get warm, comfortable and still. Now was neither time nor place for that coffee that went with breakfast to overly stimulate his bladder.

He and Uncle Ray assumed an almost meditative silence. Their senses worked in overdrive in aposition to their stoic, becalmed exteriors. Their eyes, ears, and noses worked to calibrate and attune themselves to the Early Morning Nautical Twilight of a forlorn and forgotten tract of woods. Minutes passed and the hunters began to see, hear and smell more. Take away that flood of sensory overload you get in human society, and the body’s senses tune in a whole new bandwidth of frequencies.

Ray began to quietly ready his weapon. A little more steam tendrilled out of each nostril in an accelerated rhythm. His face got the look of serene, intense concentration. Just like it did before Corbin got the leather belt across his rear end back home. Corbin had no idea of why Ray had tensed like a hungry, sleek cat of the jungle.

The shot was sudden and buzzed an angry hornets’ nest just past where Corbin lay. Corbin turned to watch just as the arrow took a stag center-high in the chest. It was just a tad Right and had missed the heart. Nevertheless the deer went down before it could even begin its last panic sprint. Its head lolled in capitulation to reaping fate before Corbin could even begin to estimate points. Maybe eleven.

Ray stood up and began to nock in case the deer had a sudden adrenaline shot and tried for escape. A mocking voice then interrupted Ray Hulberson’s moment of satisfaction. “Hulbertson, you dumb nigger’s bastard, you just shot me two weeks of dinner.” Holten Kyle swaggered out from near where the deer lay in a jaunty, derisive hautour. He had a Remmington 30-06. Hulbertson wasn’t quite good enough or fast enough with his bow to risk it over game.

“You’re a rotten thief who’s wife sleeps with half the men in church, Kyle.”

“Yeah, but this daddy will bring her home the bacon. That’s more than Laura can say ’bout her drunk loser of a man. Oh, and where’s your game tag if this deer of yours is a righteous shoot?”

Ray’s face seemed to turn a bad combination of brown and red. It reminded Corbin of how the clouds bowed up a half-hour before the county tornado sirens went off. It also didn’t look intelligent or even healthy. Not for Holten Kyle. Not for Uncle Ray while Kyle still lovingly fingered his Remmington.

Corbin gauged the distance between him and Kyle mentally. Seventy-five meters, wind too calm to be a factor. He’s maybe 5’7″ and offers what generously could be described as a nice, wide center of mass.

Ray and Holten Kyle stared one another down. Kyle would take a step to the deer. Ray would ponder nocking that arrow to the decision point. Kyle again veered the business ended of the 30-06 in Uncle Ray’s direction with an almost mocking I-Dare-You insolence. Corbin knew Ray too well to be hopeful.

The mockery continued. “Not a bad arrow, Hulberson. You fletch them yourself?”

“If you’re taking it, take it. Just watch behind you when you try to drag it, Kyle.”

Holten Kyle wasn’t exactly on sabbatical from Cal Tech, but he knew a Mexican Stand-off when he’d blundered into one. Ray would be here all day rather than let that deer go home in the back of Kyle’s F250. He also had a touch of temper himself. It got to him that Hulberson wouldn’t just accept the reality of superior firepower and admit that the smarter man had just jackaled his kill. This temper flared ugly and then things went South quickly.

Kyle brought the weapon to bear and had just begun his steady pull on Death’s Trigger. Ray was a half-second too slow but had made admirable progress on nocking, pulling and laying dead aim. It was over for Ray. Until reality changed.

Kyle’s Remington discharged in anger. The shells punched a hole in the sky. Holten staggered like a man intoxicated. His life-force ebbed as he staggered the leaf-strewn terrain in search of a suitable place to die. Ray’s arrow took him through the neck with a pissed-off, reaving kinetic energy. The blood droplets spun in a macabre arc. It was the second lethal shot to place home in Holten Kyle. Corbin had not shot at nothing. Come what the furies brought next, he could at least lay claim to not having missed.