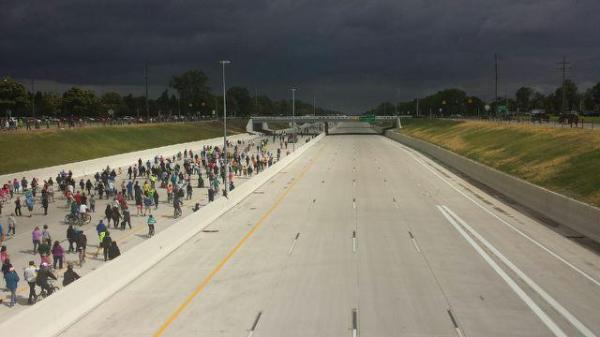 If you were an outer-space alien traveling the universe, you would probably learn that most species screw up in the same ways. In fact, when you analyze what happens, there’s only one basic way any lifeform can screw up. What makes animals (including sentient ones) unique is that they have consciousness, and use it to predict how their world will react to them. In this light, there’s only one error, and that’s to misjudge the world around you, including the error of becoming deluded as to its true nature.

Most species that screw up and destroy themselves, according to our alien traveler, do so by having a false impression of reality. If you think that a wild beast will not attack you if you hold up a shiny stone, and it does anyway, you fail as an individual. But if you with all others of your kind build a society, and agree that something is true and it is not true, you run the risk of destroying the whole society because it is in part based on error. Presumably, an outer space alien has seen the remnants of plenty of species that have screwed up, and how most of them look won’t surprise you: polluted planets later scarred by nuclear blasts.

On planet earth, we have now had plenty of experience with this basic error, but haven’t yet brought it to its conclusion. That means we can choose to save our sorry asses now, or can keep happily going down the path of least resistance until our planet too is a grey ruin. The reason it’s the path of least resistance that is destructive is that in a society where delusion is accepted as fact, it’s going to take a lot of work to convince people to say that the emperor isn’t wearing any clothes, and that we’ve got to try a different way. People don’t like having to switch from an easy way of life to a harder one, especially if the consequences of that easy way of life – total destruction – are beyond their comprehension. (And let’s be honest: all but a few humans cannot think past his or her next paycheck, much less on a millennial scale!)

Right now a few of us have seen the error. But because we’ve lived in error for so long, we have no words to describe it, and are left trying to give people complicated reasons when those that oppose us use simple, moronic concepts that sound good and are therefore accepted. It’s bad enough that their logic works in the short term, where it takes much longer to see why ours is superior. Imagine trying to explain colors to a blind man – that’s about how explaining reality to the deluded is. Despite all of this, more people are seeing the truth every day.

As you can imagine, the basic error doesn’t break down along political lines. It’s as popular among Democrats as Republicans, and is at such a basic level of our assumptions about reality that anyone who sets out to conquer it rapidly finds him or herself describing it in the words and concepts we use to maintain our delusion. For this reason, most attempts to conquer it fail miserably. One way this basic error is described is “relativism,” and another is “pluralism,” and yet another is “individualism”; these leftist terms have counterparts on the conservative side, namely “freedom,” “opportunity” and “free enterprise.” All the words mean the same thing, when you look at how they’re joined as concepts over a thousand year period.

Relativism is a funny name because it is an attempt to politicize a scientific “discovery.” Only fifteen to twenty thousand years after the ancient Indian Aryans wrote a book called the Mahabarata in which they described, among other things, the explanation of the observational fallacy which we now know as “relativity,” science came up with a simplistic doctrine of the same and expressed it in symbolic math. Those who wanted to gain political power saw their chance. They portrayed all of society up to that point as an ignorant conservative herd, and created a “new” idea, called “relativism.” Relativism states, in short, that the individual only knows what he or she has experienced, and it is as real to them as any reality, thus when we make decisions involving those individuals, we have to consider what’s inside their heads to be as real as the reality we all share.

When you look at it that way, of course, relativism is revealed as the sham it is. If you boil it down even further, you see that relativism is basically the doctrine that we can each believe what we want, and there is no reality check, ever. In short, reality checks are made illegal by the doctrine of relativity, even though reality has always been consistent for all of us equally. Even calling relativism a “new” belief runs afoul of reality, as the belief of relativism has been around for a long time, but in the past we called it something different: “insane.” Our time is unhealthy, of course, so to claim that health exists is like saying the emperor is stark naked when the newspapers say he is not.

Relativism got associated with Marxism and other diseases we attribute to failed places like Russia, which during a century went from one of the world’s leading nations to an impoverished third-world country where prostitution is considered a desirable career choice, so those who promoted relativism picked a new word: pluralism. Pluralism is a restatement of relativism to include “culture,” which naturally means any culture but that which is assumed to be the dominant conservative culture, a vestige of the time when America was, like Russia, a European-style country. In pluralism, there is no clear reality either, but your reality depends on your culture; if in your culture the sky is green and the grass is blue, that’s as real as any other perception. Of course, within pluralistic cultures, you can have your own relativistic reality too.

All of this fancy wordplay obscures a simple truth: healthy people like reality, and those who fear they are not healthy (usually because they lack confidence in themselves) hate healthy people, therefore they decided to tear down reality and replace it with personal desires. This is not much different from ostriches hiding their heads in the sand, or drug addicts preferring to stay zonked. The underconfident ones decided, as a group, that they wanted “freedom” as individuals, but the only way one gets “freedom” to do unhealthy things is by obliterating the line between real and unreal, because most unhealthy things are based on unreal assumptions. When you get rid of reality, you can claim something unhealthy is just as OK as something that is healthy.

Of course, by doing this, you lose out a lot. First, you lose the ability to have greatness, since there’s no objective standard by which greatness can be measured. Second, you lose the ability to have reality, and thus to respond to calamity. Finally, you create a social atmosphere where rising above the norm is distrusted, because if you achieve health, you might try to impose reality on other people and thus reveal their own inadequacies. In short, what is created by this process is a society addicted to unreality. We call this “individualism,” because it places the desires of the individual above collective reality. There is no longer reality; there are only the wants of the individual.

Every society that has gone down this path, and there have been many, has collapsed and left behind a fragment of itself, even if its people became more numerous. Most of the impoverished dumps worldwide are remnants of great cultures, or what’s left when the slaves overthrow the masters and declare reality abolished, thus making a society that cannot even plan far enough ahead to have hygienic sewer facilities, enough food and shelter, or higher learning. This is the thousand-year consequence of relativism, but those who demand relativism never think that far ahead. They’re only thinking of themselves, and how afraid they are of reality.

There’s another dimension that makes it hard to demand reality, which is that most of us are nice. We don’t want to make other people feel uncomfortable, or to point out their weaknesses. So when they make it clear that admissions of reality would, for them, constitute a weakness, we quietly go on pretending that reality doesn’t exist. It’s only a generation later that we realize our kids needed to see that reality exists, and instead of teaching them that, we’ve shown them only unreality, and thus they’ve gotten a start in life by making a number of unhealthy choices that they won’t even partially understand for decades. They’ll spend their adult lives trying to sort it out. Doesn’t the old saying go, “The road to hell is paved with good intentions”?

The outer space aliens, when they see denial of reality, nod their heads wisely and head to another planet. Our hypothetical cosmic travelers got to that stage in life by paying attention to reality, not finding ways to explain it away. Maybe their own planets had a close call with delusion, and they learned, or maybe they were just more astute, but now there is no doubt in their minds that to abandon reality, no matter with what “good intentions,” is to start the march down the path to inevitable doom. Maybe our society will learn before it’s too late.

The Conquering | Radical Traditionalism and Nihilism