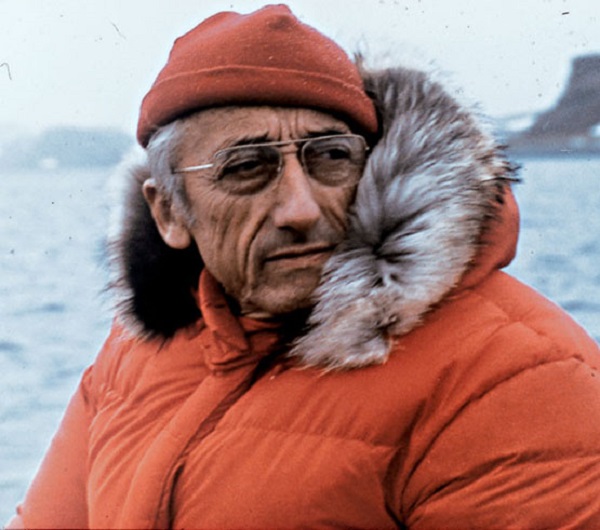 Among advocates for nature, underwater explorer Jacques-Yves Cousteau remains a perpetual favorite for his embrace of natural species without moralizing their predatory and often dangerous ways. He steered people past fear to appreciation for the world beneath the waves.

He also made a number of statements which left and right alike recoil from in horror. The foremost is reproduced here:

Our society is turning toward more and more needless consumption. It is a vicious circle that I compare to cancer . . . . Should we eliminate suffering, diseases? The idea is beautiful, but perhaps not a benefit for the long term. We should not allow our dread of diseases to endanger the future of our species.

This is a terrible thing to say. In order to stabilize world population, we must eliminate 350,000 people per day. It is a horrible thing to say, but it is just as bad not to say it. – Interview with Jacques Cousteau in a 1991 UNESCO Courier

Like other ecologists of note, he sees past the convenient lie which is that by buying “energy-efficient” dishwashers, we in the West can solve the crisis of ongoing human ecocide of our environment. Instead, he points the finger toward the likely culprit: overpopulation.

With enough untouched natural land around us, our impact is minimal. But with each human we add, we need more land for human use only. This land comprises not only habitations, but farming, roads, factories, hospitals, schools and other things we traditionally consider “good” but ignore how they displace natural ecosystems that renew our air, water and food resources.

Like bacteria in a petri dish, humans on their current course will absorb all nutrients and use up all space, then begin a die-off as they run out of resources and are poisoned by their own waste. This pattern is consistent with many species who self-destruct, and those who explore nature have seen it many times.

Cousteau claims he is “an ecologist for the people” in the “Obituary of Jacques-Yves Cousteau,” New York Times A p. 1 (June 26, 1997). He is thus both an advocate for nature and humanity, who only by linguistic convenience exclude themselves from nature, as both will be doomed by the same process.

This gentle, thoughtful and fearless man showed us with passion the intricacy of the world’s oceans as a form of wonder and reverence. His attempts to do the same for human population control have met with mystification, but his same insight propels both observations.

Pentti Linkola | Entitlement: The most obvious sign of civilization decay