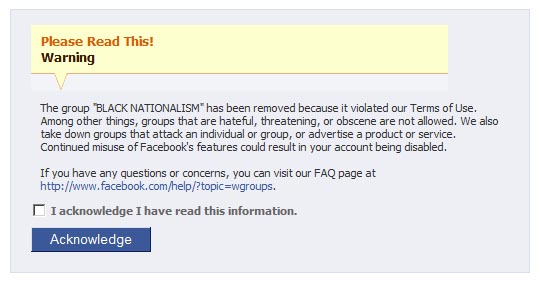 The group was not hateful (vague), did not threaten anyone, was not obscene, and attacked no individuals or groups. It was for the positive advocacy of Black Nationalism, African-American independence, African secession and autonomous self-rule for African-Americans and Africans.

It’s not just white people that Facebook discriminates against. If you stand up for nationalism, or the definition of nations by ethnicity, you are going to get shut down. Why? Probably because that idea offends our modern notion that with democracy, propaganda/education, and consumerism we’re all going to be OK. There’s no need to actually address problems like diversity or class warfare — just tolerate them. And keep buying stuff.

Sensibility and Intelligence | Reality is Nihilism