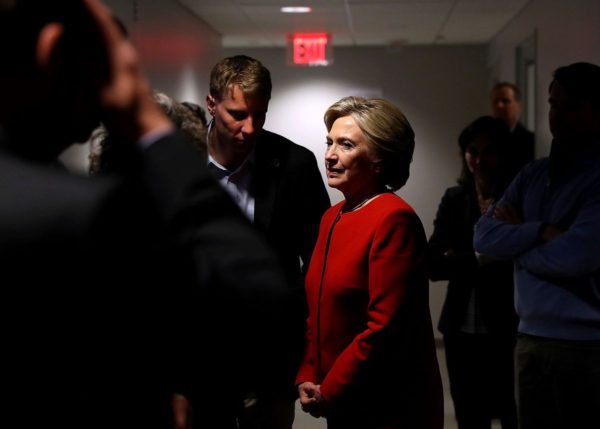 Sometimes, after years of education and successful business activities, your historical importance comes down to using a key term like “alt right” during a political campaign. In an interview with the Richmond Times-Dispatch, Trump presidency Chief Strategist Steven Bannon backpedaled on any association with nationalism:

â€œPeople are not going to buy this,â€ Bannon said. â€œThe deplorables are not racist.â€

Trump can win support among African-Americans and Hispanics, he said, if the new administration can deliver on a â€œunifying messageâ€ of strong schools, safe streets and jobs.

â€œAnd condemning any kind of form of racism or hatred thatâ€™s out there,â€ Bannon said.

The fears of those who think racist groups have been energized by Trumpâ€™s hard-line campaign stances against immigrants and Muslim refugees were heightened last weekend when the National Policy Institute, led by alt-right figure Richard Spencer, held a gathering in Washington that included Nazi salutes and shouts of â€œHail Trump!â€

The point that was missed is that the Trump voters are a massively mixed bag, but include — possibly as their largest majority — people who do want ethnic nationalism, or the meaning of “nationalism” that historically-aware people use by default.

The world order has shifted. In the 1990s, there were two competing voices: Francis Fukuyama and Samuel Huntington. Fukuyama thought that human politics had reached their final evolution with liberal democracy; Huntington saw that as the calm before the storm, and predicted that increasing contact would lead to tribalism.

As it turns out, Huntington was decisively correct. Even Henry Kissinger is doing his best to re-state Huntington’s theory as his own. He speaks of a world order arising from regional identity instead of the organizing principle of the former world order, which was loyalty to a certain political and economic system:

In his most recent book World Order (2014), Kissinger argues that the world is in a parlous condition verging on international anarchy. This is not only because of shifts in the material balance of power from West to East, but also because the legitimacy of the postwar world order is being challenged. Four competing visions of world orderâ€”the European-Westphalian, the Islamic, the Chinese, and the Americanâ€”are each in varying stages of metamorphosis, if not decay. Consequently, real legitimacy inheres broadly in none of these visions. The emergent properties of the new world disorder are the formation of â€œregional blocsâ€ with incompatible worldviews.

In other words, the world is now divided into four orders which are remnants of the old order, irrelevant because they failed to predict the turning of the tide. What will remain is the general identity of these groups as they shift toward something less ideological and more practical.

The age of liberal democracy was a time of ideology when humans thought that having opinions which pleased others, like something out of a Dale Carnegie course, was more important than having those opinions when applied turn out to have positive results. This mentality allowed the postwar Left to seize power and then be condescending to all who did not follow its path, but that same inertia caused the Left to fail to notice that its fall of the Soviet Union moment had arrived.

Bannon has backed the wrong horse in this moment when he should be relishing victory. This is unfortunate for him and for Donald Trump, but will not affect their victory. They are part of the rising libertarian wing of Western leaders — part of what the above quoted article refers to as a backlash against “bureaucratic introspection” — which makes way for the transition to the Huntingtonian world order.

Future Survival â€“ Part 5: Goals | If They Can Have It, We Should Have It Too