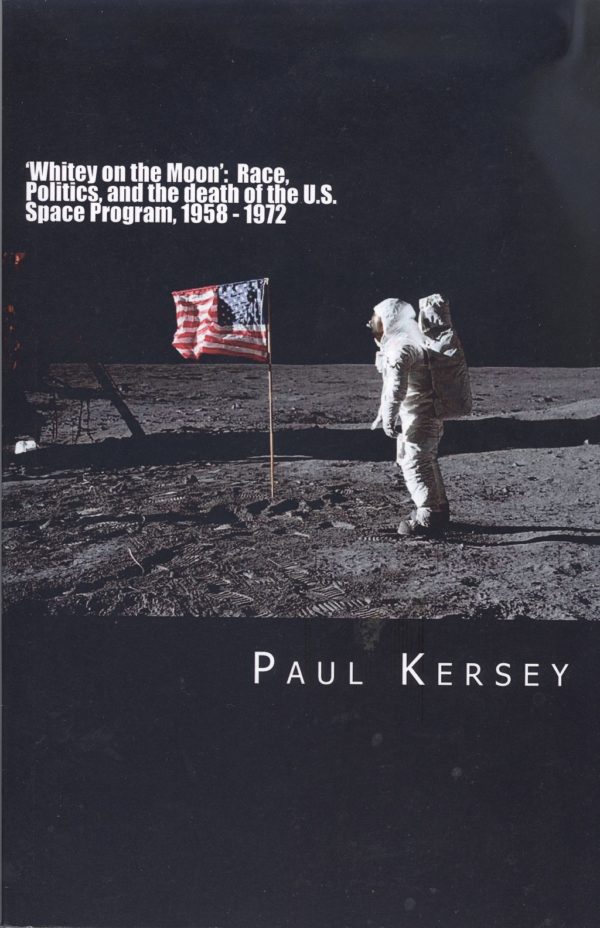 In the midst of the excellent documentary, In The Shadow Of The Moon, the viewer finds it impossible to suppress the question: “Why do we not do this anymore?”

The answer is both depressing and predictable: the United States shifted its goals from discovery to subsidy, mainly because of its WWII-induced guilt over its own ethnic strife. Its response was to introduce subsidies in the form of affirmative action, diversity programs, and public image requirements that forced American agencies like NASA to stop looking at goals in reality, and to look toward public image/political goals instead such as multiculturalism.

Paul Kersey writes the lugubriously fact-based blog Stuff Black People Don’t Like, but in my view, African-Americans have a lot to learn from him and this book. They are political pawns being used as much as the Kurdish female soldiers or dead babies during WWI; the point is that government is expanding its reach, and world Leftism its power, by using African-Americans as a justification for more money and more authority.

He traces this process through the space program, which even from its early days had political overtones which eventually boiled over in the need for the appointment of diversity czars and the hiring of more minorities and women in order to make the agency feel politically correct. Since that time, NASA has been in full retreat from its actual goals as it becomes more deeply enmeshed in political ones.

After 1972, those standards — once general operating procedure — were replaced with a mandate from the U.S. Civil Rights Commission to… scrub away the vestiges of whiteness and replace it with minorities.

The autopsy of this tragedy focuses on our first minority president, John F. Kennedy who as the grandson of Prohibition-era smugglers and an Irish-American, was an affront to the WASP hierarchy of the day. JFK decided that black America needed a positive image, and instead of giving it to them on their own terms, he manufactured it from a public relations perspective. Thus came the quest for more black astronauts and NASA staff, which gradually expanded to include women and other minority groups.

Keep in mind the irony of this whole situation. The NASA diversity push came at a time when early memos talked about “Negroes” and Indians, and gradually grew to include the chaotic brew of ethnicities from post-1970s America. It arose from the Great Liberalization brought on by the Second World War, where the USA and UK defined themselves in opposition to the conservative empires of Germany and Japan (oh yes, and Italy… briefly). This was extended into the Cold War as a way of beating those evil Soviets… who happened to be pro-multiculturalism themselves!

In fact, what we were seeing was a typical Leftist game: pretend to be enemies. Two sides, claiming to be in a battle toward the death, were in fact carefully modifying each other to drift ever Leftward… while the clueless or dishonest media and voters looked on, as if they were watching an episode of Gilligan’s Island. The result is always more Leftism, which makes everyone happy except the 1-2% of the society which retains working brains.

By 1973, the federal government workforce was 20 percent nonwhite (primarily black, considering the demographic explosion of Hispanics and Asians was yet to occur), but (horror of horrors) NASA was roughly 95 percent white.

His thesis reduces vast complexity to a simple principle, which is that in the aim of promoting Leftism, the federal government had to enforce equality amongst classes and races, and did so by hiring these people into jobs where useful activity was not only not expected, but not needed. They were there to be smiling black faces for the photographs and news stories. They were tokens, not people, in the eyes of Leftist government.

Kersey writes convincingly, passionately. He repeats himself frequently to keep focus on the topic, which makes this an easy read with many twists and turns at the end of which rest interesting revelations. He pulls out many primary sources as well as contemporary media sources to make the point that what happened to NASA occurred in plain sight, brought on by the best of intentions, and it still failed… and we are still earthbound, trying to solve the problems of diversity with more subsidies.

Where Kersey and I disagree is on the cause. I acknowledge all that he says about Africans, but see these problems as inherent to diversity itself, even if the groups are all high-IQ and low time-preference. Diversity ensures that one group takes the lead and must pay for the others, which leads to a sick dependency which resembles a bizarre sado-masochistic ritual. Africans and Western Europeans each want their own societies, but the pretense of equality does not allow this, so they destroy each other.

However, Kersey’s point is more that the pursuit of diversity, not diversity itself or African-Americans, brought down the space program. When you re-define the goal to be appearance, performance no longer matters. All other goals are destroyed. What replaces them is Big Brother ranting out a “humanistic” ideology through the loudspeakers, and all are enslaved to enforce this unrealistic goal.

In the meantime, as Kersey’s most eloquent writing reveals, the real world is out there, ready for exploration — and we will hate ourselves for wimping out on it.

Space flight and exploration isn’t an “inhuman priority” — it’s a priority of a civilization with the imagination and intelligence to explore the realms of existence.

A belief in our supremacy got us to the moon, propelled by the dreams of a better tomorrow for our posterity and our nation; but an insidious, counterfeit belief in our shared guilt gave us modern-day Detroit, propelled by false notions that we are responsible for the sins of our forefathers (and that Blacks are somehow deserving of “reparations” for those sins, even though not one Black today ever lived under American slavery). (136-137)

This book, a collection of essays with extensive quotations from mainstream sources, makes this point most brilliantly: we gave up on our dream for guilt, and even that has not solved the problem. Black people still face the same problems, and white people are burdened with a parasitic subsidy state that wishes to destroy them, and to further this goal, the seemingly frivolous but existentially essential practice of space exploration had to be sacrificed.

What else will be killed for guilt? Guilt is a vast black hole. It absorbs everything around it and destroys it, digests it into tiny bits from which nothing good can come. Our society is blighted when it decides to pursue these emotional gestures instead of solid accomplishment, and it makes us miserable and self-destructive.

But until we reject the guilt, we will never see anything but this path to death, and ‘Whitey On The Moon’: Race, Politics, And The Death Of The U.S. Space Program, 1958-1972 makes this point convincingly and without excessive feeling; it shows us our choice in two paths, one to space and one toward misery on earth in the name of pity.