Western pity put to the test by pop culture

Sometimes, from unlikely sources, we get the raw and brutal truth: 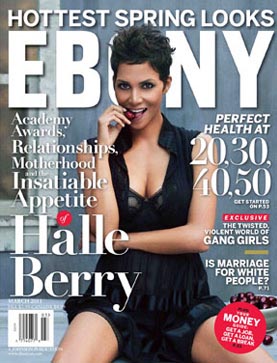 “I’m black and I’m her mother, and I believe in the one-drop theory,” Berry said, referencing the 20th-century law that classified anyone as black if they had any African ancestry.

The “Frankie and Alice” star, who like her daughter is mixed-race, admitted to Ebony that Nahla will one day “have to decide” for herself how she wants to be labeled.

“If you’re of multiple races, you have a different challenge, a unique challenge of embracing all of who you are but still finding a way to identify yourself, and I think that’s often hard for us to do,” she said.

The comments are especially interesting in light of a TMZ report on Friday that claimed Aubry, 34, views their daughter as “white” and allegedly became very upset whenever Nahla was otherwise characterized. – NYDN

Berry and Aubry point out the crisis of multiculturalism: which side do you pick, knowing that both answers are wrong?

If your child is forced to choose between cultures, no answer is really right so you end up frustrated in a role. Yet to have no parent culture is to truly be a product of your environment, to be lost without a social group and values, and to be alienated from the idea of culture itself.

Here’s another great view, this time lampooning Western pity and the insincerity of our Hollywood stars:

At some point, the “wealth bubble” of the industrial revolution will fade, and with it will fade the pleasant illusions we used to manipulate each other and accrue personal wealth at the expense of truth and our future. Remember who acted well, and view them as the next level of evolution, while the others descend into the morass from which they came and to which, in spirit, they belong.