Was Socrates A NaÃ¯ve Idiot? 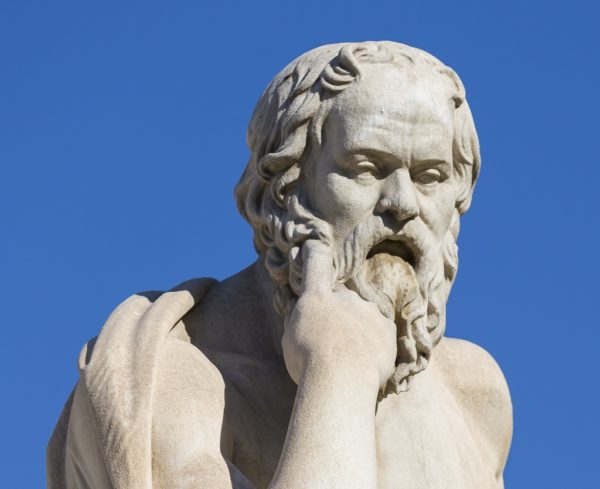 So there was this teacher-dude named Socrates who enjoyed a game of mental chess. Perhaps you could consider it a fairly highbrow version of The Dozens. Heâ€™d debate the best and brightest of Ancient Athens and leave them sucking their thumbs with the pants around their knees.

Anyone playing Dozens in East St. Louis will wager his life if he plays too well against the local street pharmacist or one of his boys. Socrates wagered his by playing against the foremost citizens of Athens and was sent up the Acropolis by a kangaroo court and ultimately faced the death penalty. The whole history of Western Philosophy, Government and Civilization would have gone in a different direction if the dumb old coot had handled his bidness like a Clinton.

You see Socrates, like the Clintons, had his fan boys and admirers. There were people in Ancient Athens who would do a few things for him and pull the wires where needed. Just remember which flunky turned which trick, and no Hemlock and Tonic for the Smarty-Pants. His little B!tch-Boy Crito was ready to get Socrates out of town. But No! Socrates was difficult and couldnâ€™t get past his hang-ups. He speaks his Beta-Maleness below.

Then consider the matter in this way: Imagine that I am about to play truant (you may call the proceeding by any name which you like), and the laws and the government come and interrogate me: “Tell us, Socrates,” they say; “what are you about? are you going by an act of yours to overturn us — the laws and the whole state, as far as in you lies? Do you imagine that a state can subsist and not be overthrown, in which the decisions of law have no power, but are set aside and overthrown by individuals?” What will be our answer, Crito, to these and the like words? Anyone, and especially a clever rhetorician, will have a good deal to urge about the evil of setting aside the law which requires a sentence to be carried out; and we might reply, “Yes; but the state has injured us and given an unjust sentence.” Suppose I say that?

No Clinton would ever be that stupidly callow. Hillary Clinton was no more likely to ever be indicted for her market making in state secrets than Cersei Lannister was to stand trial before The High Sparrow. I mean if the state tries to injure one of the elite, the state will be dealt with. We have an entire caste of people who are immune. They get their pathetic little Lynchs and Comeys to make the system run more properly.

Perhaps the silliness of Socrates was a distant foreshadowing of Kantâ€™s Categorical Imperative. Could you really run an entire state if everyone decided the law was mutable and selective in application? Ganzalo Lira suggests the state remains possible only when citizens are almost uniformly law-abiding even when the boys in blue are off at the doughnut shop. He describes a failure of this state of affairs as Middle Class Anarchy.

Iâ€™m betting that more and more of the solid American middle-class will begin saying what Brian and Ilsa said: Forkit. Fork the rules. Fork playing the game the banksters want you to play. Fork being the good citizen. Fork filling out every form, fork paying every tax. Fork the government, fork the banks who own them. Fork the free-loaders, living rent-free while we pay. Fork the legal process, a game which only works if youâ€™ve got the money to pay for the parasite lawyers. Fork being a chump. Fork being a stooge. Fork trying to do the right thing â€“ what good does that get you? What good is coming your way? Forkit. When the backbone of a country starts thinking that laws and rules are not worth following, itâ€™s just a hop, skip and a jump to anarchy.

And why should this just be restricted to passive resistance by aging citizens? Suppose the muscles, sinew and raw materials that build and maintain a nation make the same decision. Fred Reed ponders this from a military perspective. Is a general any better than the level of compliance he receives when he issues commands?

[I]tâ€™s the grunts who will begin to revolt, first in small ways (as in the 101st in late 1968, â€œNo sir. We are not going up that hill again.) and then, quickly thereafter (As in 1973, â€œFuck you, asshole.â€) By that time the media may get wind of things and spin it exponentially out of control. Thatâ€™s what I think.

Regardless of what you may think of the following three things:

Ask yourself the following question. Yea, though I walk through the Valley of The Shadow of Death, am I truly the baddest fothermucker in the valley? If not, make your preparations. A world where people live like Kurt Schlichterâ€™s polemical description is not livable. It is a chaotic hell.

The idea of the rule of law today is a lie. There is no law. There is no justice. There are only lies. Hillary Clinton is manifestly guilty of multiple felonies. Her fans deny it half-heartedly, but mostly out of habit -â€“ in the end, itâ€™s fine with them if sheâ€™s a felon. They donâ€™t care. Itâ€™s just some law. Whatâ€™s the big deal?

Itâ€™s no big deal. It really isnâ€™t. The universe cares not if you, I or Pope Francis all three get gacked tomorrow. Itâ€™s a big deal to me if I get gacked, but that only matters if the neighbors think it matters. Hillary Clintonâ€™s continued and disingenuous excuse for a career asks Amerika an important question. â€œOh, what difference does it make?â€ Be ready for some very unpleasant answers.