As our political parties prepare to reverse poles, with the Republicans going more libertarian individualist, and Democrats going more centralized moral activist, discussion proliferates on the question: what really are the differences between conservatives and liberals? 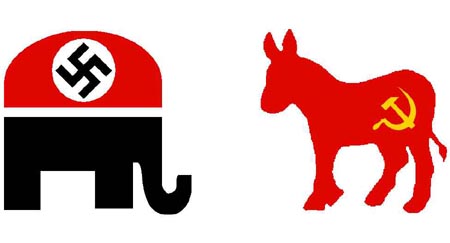 All civilizations to some degree believe in this principle; whether you jail a murderer for life or kill him, you’re removing him from society and preventing him from reproducing. Unnatural natural selection, or simply, civilization defining the environment and thus who survives?

While Democrats are on a spectrum stretching from European free-market enhanced socialism to anarchy and Communism, and Republicans are on a spectrum spanning free market Social Darwinism to National Socialism, the principle remains the same: in one, the civilization is the means to the end of its people; in the other, the people are the means to the end of the civilization as a whole.

In this there’s a fascinating concept, that of treating civilization as a body with many specialized roles for its cells, without which the cells could not exist. You may be a streetcleaner in this civilization, but you’ve got a support network. The liberal view, on the other hand, as Michel Houellbecq pointed out in his great novel “Atomised,” is that of an independent particle, a body in itself — as if the civilization did not exist, except to provide stores, roads and television.

It’s an interesting divide. On one hand, the idea of being autonomous, free, unique and dependent on nothing appeals to us; on the other hand, we want the advantages of civilization for which we necessarily trade some liberty and solipsism: the infrastructure, the culture, and the support network.

My guess is that those who have experience with leadership, engineering and design of a structural sort tend toward the conservative as a result. Build a great civilization, and great people can rise — on the other end of the cycle, you need to reward the good and remove the bad for that to happen.

This realization is a far cry from the mainstream drivel that separates left and right on methods. Obviously, that’s false, as we’ve had both left and right authoritarian governments. In fact, we don’t even know authoritarianism is so bad, since knowing that our fellow citizens like to buy junky products and then throw them out, litter, vote for morons and carve up acres of rainforest for a cheaper hamburgers makes us distrust this disunited autonomy that rewards the individual at the expense of civilization itself.

When New Righters talk about the “organic civilization,” they’re speaking of the civilization as a body, and individuals as cells. While this doesn’t feel as good as seeing ourselves as autonomous nations within a nation, it’s also more realistic and instead of denying the limits of our autonomy — and our mortality — it gives us a context in which we may shine.