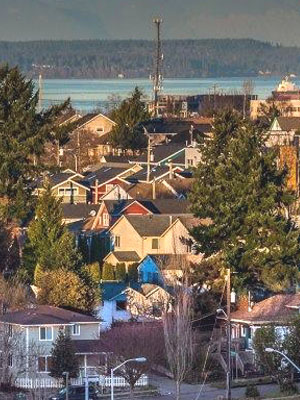 The collapse of a civilization is a big deal. Carry off everything you can, or form small secessionist retreats, but you face the problem of what the rest of the people escaping the failure will do. Most likely, they charge en masse and then kill you and take your stuff.

There’s also the lost learning. We won’t cry over the past fifty years of non-literature, non-art and non-learning, but there are a few exceptions, and the greatness of the past. Nothing stops this from being lost, especially if people need toilet paper or some tinder for a fire.

Always there is the possibility of escape. But to where? We’ve covered the world in civilization, and even moving into the dense dark jungle just means that someone will construct a freeway toward you, probably just to kill you and take your stuff.

Re-civilizing an area seems like the best course of action, but this will be a frail and delicate civilization for its early years. This includes both internal factors and external: internally, you need to find a culture or vision that binds you together; externally, the formerly-urban zombies will attack, and there’s no guarantee the crops will survive.

Many of the people who are not served well by the current system want to burn it down, tear it down, and destroy it. Like the liberals they apparently are emulating, they see destruction as a form of renewal and cleansing. In symbolism and emotion, this sounds good. In reality? It brings on a mess.

The industrialized world, and especially the West, has divided itself into two incompatible camps. The first wants realism and a functional unified culture as is needed for civilization, but the second wants a social subsidy and pluralistic non-values, to the point where reconstruction is impossible:

The social, cultural, moral and political revolutions of the 1960s, against which Richard Nixon and Ronald Reagan inveighed to win their 49-state triumphs, have now captured half of the country.

The 1960s were the era of the left’s great gambit. The children of the people of the 1930s, who were trendily rebellious in flirting with Communism, took up the cries of the French revolution — equality, internationalism, socialism and inversion of social roles — and made them a mass-media social product that spread like wildfire among the Baby Boomers who were desperate for a way to not only fit in but be important.

Fifty years later, this virus has sickened the host and accomplished its goal. Both the EU (sorry… Europe) and the USA are split by this divide. There is a huge liberal population that is generally young, foreign or dependent on the state, and then an indigenous substrate that wants to be reasonable but is basically pulling in the other way.

This indigenous substrate exists without a media blitz because it doesn’t need one. It is generally composed of people with more experience than the other half, both in years and responsibility. These people want conservative values because they know from experience that conservative values work and make healthy families, cheerful communities and thriving nations, where liberal ideas slowly drain all resources.

Resource drains of this nature transfer money, energy and social focus from constructive use into subsidy for those who will not replace those resources with more. Unlike the wealthier-than-average, who if allowed to keep their resources will make more of them because that’s how they got to above average wealth in the first place, this group represents the end of the line.

The result of this split is massive social alienation, dysfunction and paranoia:

And Americans are already seceding from one anotherâ€”ethnically, culturally, politically. Middle-class folks flee high-tax California, as Third World immigrants, legal and illegal, pour in to partake of the cornucopia of social welfare benefits the Golden Land dispenses…People gravitate toward their own kind. Call it divorce, American-style.

The 1960s, like the 1789 revolution in France, ripped the heart out of the West. They replaced culture and nationality with pluralism and diversity, using relativism as a way to justify the absurd contortions of social Marxist thought used to keep the dysfunction afloat. Those who wanted to succeed within the system had to choke it down and regurgitate this dogma in order to be accepted.

What’s most interesting about this is that, like all revolutions for people power, it was a solution in search of a problem. It never had any legitimacy because it was a power seizure, not a righting of wrongs:

Think about the modern West. We have followed egalitarianism into the grave. Since the 1960s, our social programs have expended vital resources on eliminating poverty, with zero success. In fact, there’s more poverty now than there was then, and our wealth wave while strong in some areas has diminished.

Even worse, our societies are divided and cannot function as a unified whole. The first strong external threat, and we will have trouble bribing all of the different groups and lifestyles to work together to fight it. Even a strong internal threat sends us into a tailspin, as this most recent recession shows.

What we are seeing here is the failure of the liberal democracy model. As time shows us, with universal voting, the voters form self-interest cliques including the most destructive clique of all, which is the no-existential-challenges clique who want cradle to grave support from a government. This is the same impulse as socialism, and it kills nations by ensuring that people don’t work together, but work against each other.

In every human group ever created, abilities fit on a standard distribution with most of us in the middle, and lower numbers of outliers on the positive and negative extremes. When the left side of the chart (below average) declares war on the right side of the chart (above average), what results is a destruction of the productive means of society itself. What follows is a tumble right back down the evolutionary ladder into the early days of primitive human group living.

The West as a whole has been trying to buy off the takers by taking from the makers, and the result only delays the inevitable clash:

This allows us to see exactly what we get in return for national income distribution. It provides a tenuous and temporary cease-fire. Otto Von Bismark described his contributions to Germanyâ€™s social welfare state as an act of â€œstealing the Socialistsâ€™ thunder.â€ While most of what he enacted is standard fare in the modern employeeâ€™s benefit package, meeting the mob half-way only made them clamor for more.

The West as a whole is in mortal decline. As the first article quoted in this post says, perhaps a Republican win would have delayed the abyss, not stopped it. And as we see above, buying off the liberals with taker-entitlements will only delay things as well.

What is needed is first and foremost for us to face this problem and admit that secession is but one symptom of a larger underlying problem. Liberalism has split the West in two. Once we face that, we can start looking at practical solutions to this separation, so that in the process of our little spat we do not level our civilization which took so many centuries to build and will take even more to re-create.

A more sensible political moralism | A sign in the sky