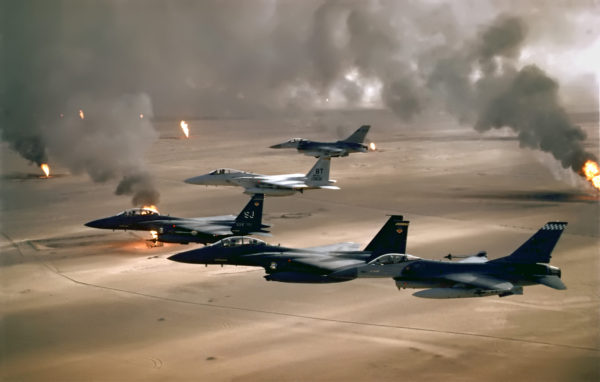 Another major suicide attack, mass casualties. The headlines roll past like sports scores and no one is really paying attention because the United States and its allies have hobbled themselves in the fight against terror. Instead of recognizing what this is — a guerrilla war waged on our soil — we try to treat it like a law enforcement and mental health problem.

It has become clear that the US policy on ISIS is failing. We are seeing terrorist attacks on a daily basis all over the globe lately. The enemy is not deterred by a piece-meal military strategy of pitting US air power with minimal sorties and many restraints against carpet bombing. What is needed is a different approach. I suggest the US should view the war as a poker game, and that its time to up the ante.

A big problem with the war against ISIS is that the enemy is all-in, while the US barely is willing to even meet the minimal commitment necessary to play the game. Hand after hand, ISIS wins by increasing the bet, striking worldwide and daring the US to hit back. Meanwhile, the US bides its time, with a few pin point strikes here and there, and minimal sorties, and then folds its hand for the day, hoping that eventually the dynamic will change. But it never does and this process repeats itself again and again. Politicians post statements about how sad it is that more are dead, people change their Facebook profiles, prayers are said and “Imagine” is played, and then… nothing.

If this is a war, the US needs to go all in, and it needs to play its wild cards. In chess you threaten pieces, and thereby force the opponent to move further into hidden traps. You tell them if you stay where you are we are coming for you . Then you force them to move and hit them when they move. This could be done in Raqqa, Syria where ISIS is headquartered. Tell them that on a given date and time that aerial bombardment will begin and will not cease until the ISIS leadership is given up. Civilians are forewarned to leave or enjoy the bombing.

If they stay they will have to face the consequences. You force ISIS and its supporters to either move or face being obliterated by nuclear weapons. When they move they will be much easy to surveil and target, which makes it possible to differentiate civilians from their paramilitary. A buffer zone needs to be created and the civilians should be lured to it by being offered necessities they cannot get in ISIS-occupied zones. And after the message is sent you shut down social media completely at least temporarily in order to make their counter attacks more disjointed. and so they cannot rally their troops as easily based off propaganda.

Some might say this is all too telegraphed. Well, in chess you telegraph one attack only to sneak with a second and a third chess piece and attack another of his pieces. This translates to: a day or two before the telegraphed warning date you demonstrate that you are serious by carpet bombing another stronghold of theirs without warning, such as the former US embassy in Libya, where terrorists have been holding pool-parties.

Warning strikes let everyone in Raqqa know you mean business. Then to further surprise ISIS and to make the world know you are unpredictable and not afraid to take them on, a selective Shock and Awe invasion could further cripple the ISIS infrastructure. Israeli commandos are the worlds most experienced urban fighting experts. No one would expect the US to have the balls to go in on the ground there or team up with Israel. The goal of the operation is to waste all low level officials and to capture the high level ones alive.

With the high level ISIS officials captured alive they are swiftly transferred to Damascus. Hand over the enemies to Assad. The goal with that is to have Assad hold them and publicly torture them whenever there are further ISIS attacks as a deterrent, and to humiliate and demoralize the enemy. Like with the capture of Bin Laden in Pakistan, or the first Gulf War, you do not make the fatal error of sticking around afterwards and policing it, nor do you target hospitals or civilian infrastructure.

Sometimes in chess it is necessary to trade pieces. Similarly, in life it is sometimes necessary and well-advised to trade an eye for an eye. The key is to capture their main chess pieces alive and to use the public torture of them as a deterrent against future attacks. Most of the other methods I described in this article are methods which would surprise and paralyze the enemy with a lack of decent options, which would render their leaders vulnerable to being captured and steal initiative back from the people who are — so far — winning the war on terror instead of us.