It’s always awesome to see nature — and by that I don’t mean your local dog park, but the rules of the cosmos: physics, mathematics, information science — showing humans just how delusional they’ve been: 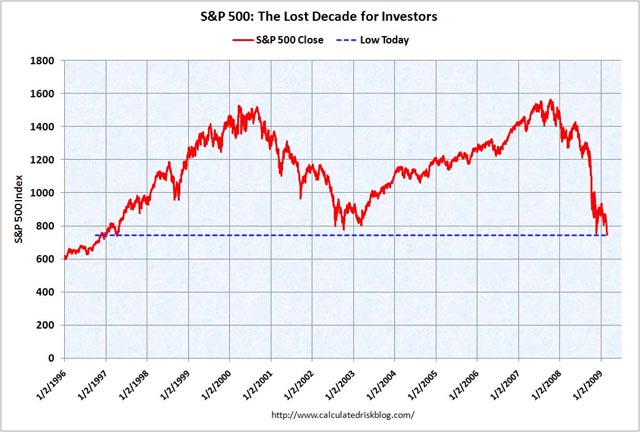 Late 1996? Why, that’s the Clinton years. We were all so glad for the American economic miracle. But then why did it need re-adjusting?

In addition to the fact that our wise The People are living on credit, buying junky products for the lowest price instead of lasting products for slightly higher, and generally behaving like chimpanzees with credit cards, we also had a problem: we over-valued our assets.

Think of it this way. If you have $100 in the bank and a loaf of bread costs $1, you might think you’re poor and lean on a populist president to do something about it. He makes it easier to borrow money, and easier to value that money by what people think it’s worth right after it’s borrowed. So suddenly you have $200 in the bank and are feeling better… until you go to the store and see that bread is now $3 (or more realistically, $2 and 30% smaller).

But I have more money! you say.

But that money is worth less! say economists. If you have 100 pennies and I have ten dimes…

That’s the path down which the Clinton economy led us, and our media — few of whom earn enough money to have to worry about such things — gladly went along with it like barking dogs.

1996. So for all of you blaming this recession on George W. Bush or the ARM lenders, think again: this recession was long in the making, because in order to please you, a populist president named William Jefferson Clinton overvalued your economy.