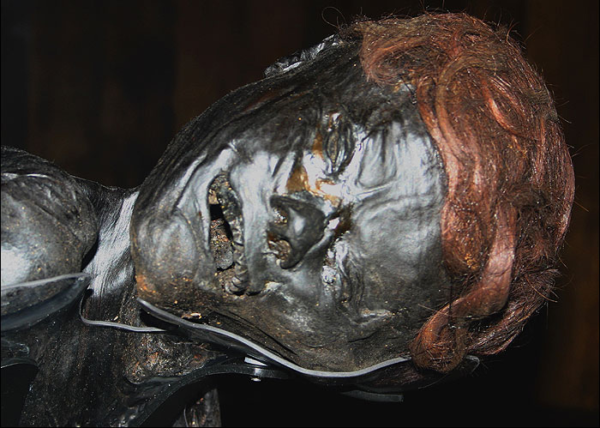 Back in the day, people were more alert and attentive to what was going on around them. They were not obsessed by detail, but trusted themselves because of their intuitive connection to their world, and so when they noticed a general change in the “shape” of events, they knew it was time to act.

The boys would break into the mead early one afternoon and talk it over. There would be some low, quiet voices from the elders, and louder voices from the young. Eventually, they would identify nodal points where things were going wrong. These points were people.

As night fell, the torches would be lit. The boys would go through the town or city, picking up those people who formed the nexus of decay. Then they threw them on wagons, and went outside the settlements to the peat bogs. There, the unfortunates were thrown in, and with long poles, pushed underneath the viscous surface of the bog.

Centuries later we find evidence of these peat parties. Bog mummies were a common discovery over the past ages, and adults told their children to be quiet and left them alone. They were remnants not of mob justice, but of the wisdom of the elders. That is, the wisdom that some are born bad, and can only do bad.

In 2024 AD, the Peat Party ran for election against the existing degeneracy parties and won, not so much by the popular vote as a formless mass, but because the 3% of the population that does all the thinking supported them and cowed everyone else into following along. Or at least enough of them.

Their first act was to suspend all laws written after 1789, when the Constitution was signed, and then to amend the Constitution to replace government with an aristocracy and modify “rights” to be “roles,” such that privilege did not exist without contribution. This was the first anti-parasite legislation enacted in the West.

Next, the Peat Party sent delegates — generally, the sharpest minds and biggest hearts they could find — to every region, where those delegates then found people like themselves among the population. These groups were assembled into councils of elders, and they drew up lists.

This time, there was no need for a bog. Instead, in front of every city hall, there were trucks. These were comfortable. On them went the bog mummies of the future, and all that was required of them was to surrender their passports. These were punched with a special symbol and the records marked in the databases.

The trucks drove to train stations, and trains took these people into Mexico. In America, over one hundred million people were removed, in addition to the repatriation of all of those who were not ethnically of the founding group. This left fewer than one hundred and twenty million people.

Along the Mexican border, a great wall was constructed, with cameras that saw in infrared and could track crossers. A great jobs program hired many men to stand at this wall with weapons at the ready, discouraging re-entry.

The parasite purge continued in the normal way. With most of the parasites gone, laws could be enforced, and instead of prison, the offenders when convicted went over the wall. This purged many more millions over the years, both impoverished criminals and billionaire grifters.

Mexico, as the new peat bog, received these people with open arms. They were able to take their wealth and possessions, and settled into Mexico to begin doing what they had done in the past. They found however that their voices were less powerful there because Mexico, having suffered centuries of parasites, simply ignored them.

In the revitalized United States, the same one-fifth of the population that did everything in the past kept doing what it had done, but now it bore far fewer burdens. Wealth, stability, sanity and happiness returned. People began investing extra income into what had been ignored, namely growth of culture and learning.

History would record this time as a momentary burst of sanity in the otherwise dysfunctional human tendency to destroy great things by creating ideology, or an excuse for why parasites should be included alongside the productive. For once, civilization won over the destroyers.

Ten thousand years afterwards, the people who came out of America were different. They were tall, strong and lean with high intelligence and bold, loving hearts. And yet, because they were the descendants of the Peat Party, they were also uncompromising in their tendency to remove parasites.

Passing generations had intensified what made these people great and distributed these traits throughout the population. If there is a state close to “equality,” a notion these people would instinctively see as parasitic, these people were the living embodiment of it.