Sucker Of The Summer 2016: Every Stephen Douglas Of The Current Year 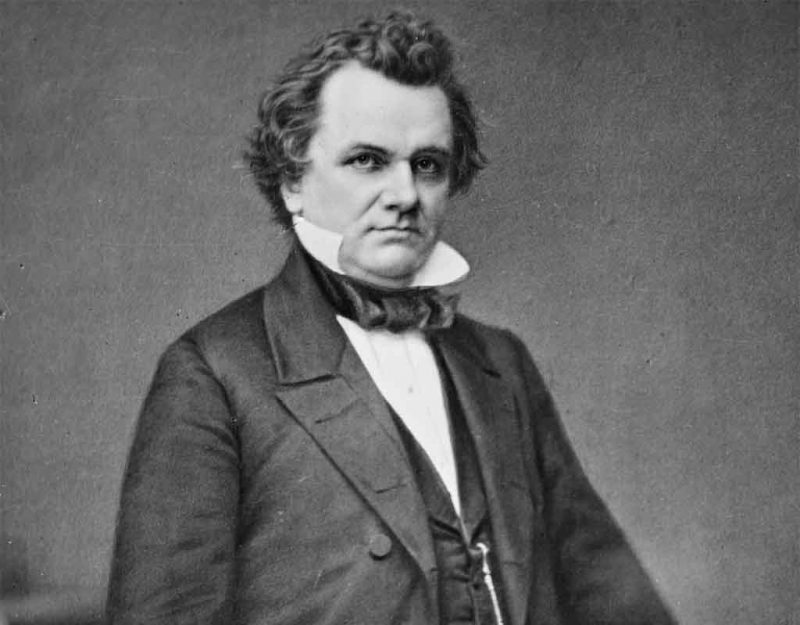 National Review’s “Against Trump” issue put beyond a doubt my suspicion that in the world of punditry, the Left, for all its unbearable progressive activism, has become more insightful and compelling than the “non-alternative right.” The team at VDARE seems to be with me on this one. A few months ago Peter Brimelow sympathetically quoted “Digby” of Salon:

The chattering classes like to say “the GOP base is frustrated because conservative leaders let them down so they are turning to Trump as a protest.” This misses the point. They did let them down but not because they didn’t fulfill the evangelical/small government/strong military agenda. They let them down because they didn’t fulfill the dogwhistle agenda, which was always about white ressentiment and authoritarian dominance. Trump is the first person to come along and explicitly say what they really want and promise to give it to them. No more beating around the Bush (no pun intended), Trump comes right out and says it.  It turns out that the three legged stool of the GOP (small government, traditional values, strong military) is just a pile of wood. Donald Trump has poured gasoline on it and lit it on fire. And a good number of GOP voters are whirling and dancing around it in ecstasy. They didn’t care about ideology. They just wanted to feel some heat.

Brimelow added that: “Of course, I would translate “conservative ideology” to “Conservatism Inc. shibboleths” and “white ressentiment and authoritarian dominance” to “American patriotism.””

Indeed it is, and it is certainly more interesting, insightful, and knowledgeable than folks at The Federalist moaning about how the GOP is replacing “freedom” with identity.

The trouble is that writers in conservative circles have not realized their incredible dearth of insight.

The George Will (who was 2015’s Sucker of the Summer) and Ben Sasses fall into the same category in another sense, as well. They believe that should they man the helm of Trump’s November loss, the American people will see the GOP “lose with dignity,” and said American people will come to the love the GOP all the more for it come 2020.

Of course, this is obviously a fantasy.

Should Hillary Clinton win in a few months, America is going to be more or less a one-party state–if it isn’t one already. The executive office will have been held for a dozen consecutive years by the Democrats, and with that comes Supreme Court picks. Remember, too, that presidents are generally re-elected, Jimmy Carter and George H.W. Bush being the only two exceptions in living memory—plus the demographic changes give an edge to the Democrats. Not to mention that the GOP gains from the Tea Party sweep in 2010 will not hold this November, no matter what.

These writers and leaders of the GOP are each a Stephen Douglas of the current year. A northern Democrat in the time before the Civil War, Douglas was a moderate on the Slavery Question, hoping to keep the country together by eschewing the politics of both the Fire-Eater southern Democrats, and the abolitionist Radical Republicans in Yankee strongholds. His mantra of civility and unity was enough to beat out Abraham Lincoln for a senate seat in 1858, but it was not enough once the stakes were raised.

In 1860, when the Democrats nominated Senator Douglas, the southern Democrats took their ball and went home: John C. Breckinridge became the “southern Democratic” nominee. But moderates didn’t exactly flock to Senator Douglas, either. For those who thought him too much a Democrat, a new, even more “can’t we all just get along” party was formed—the Constitutional Union party.

We all know that Abraham Lincoln won, sweeping the northern states, but there is more to consider. Senator Douglas came in second in popular votes, but dead last in electoral votes, managing to win only Missouri. In electoral votes, the southern Democrats came second since they, unsurprisingly, swept the south. The Constitutional Union party came in third, winning border states: Virginia, Tennessee, and Kentucky. All three losing parties were then destroyed by a Republican monopoly in American politics President Lincoln created by way of his victorious war.

Republicans held the presidency between 1860 and 1932 with but two exceptions: Grover Cleveland and Woodrow Wilson—the latter of whom only won because of a split Republican ticket. By the time the Democrats came back strong with FDR, they were not the anti-tariff, anti-bank, pro-yeoman party of Andrew Jackson, James Polk, or even Stephen Douglas.

Now consider the historical memory of the whole thing. Lincoln is admired as the vanquisher of southern evil. Steven Spielberg makes adoring movies about him, he is on our money, and is widely considered one of the best presidents of all time. While John Breckinridge in particular is not well remembered, his cause certainly is.

He is not on your money, and Hollywood does not make adoring films about him. The Constitutional Union Party is even less remembered. Just ask your high school history teacher; she’s never heard of it. So since Senator Ben Sasse has not made a name for himself as an orator, dubbing him the Stephen Douglas of our time may even be generous.

What Digby at Salon says about the Republican base today, namely that they never cared about free market reforms to social security or ensuring a strong stabilizing military presence in the Balkans, but rather just wanted someone who will protect their own domestic cultures was equally true of the Democratic base on the eve of the Civil War.

The ranchers of Texas, the farmers of Alabama, and the dock workers in Charleston did not care terribly much about the Constitution.

It was just a rhetorical weapon they could use to justify keeping the meddling Yankees at bay. They were not adherents of free market ideology, as that was just the economic policy that benefited their region. And ultimately, they did not want to preserve the nation for the sake of preserving the nation, so when a hostile faction within the nation seized the reins of power, they did their best to leave. With that reality in their blood, they went for John Breckinridge, not Stephen Douglas. Sure, Senator Douglas won more votes, but they were scattered across the nation (mostly the north) to citizens terrified of the war on the horizon. His votes were divorced from any people who identified strongly with a way of life or a belief system. They were but conservatives hoping things could go on as they always had—and the tsunami of history was about to wash them away.

Today it is the same. When presented with a viable alternative option, hardly anyone actually ends up caring about tax policy or wars that benefit Israel. After all, those are the Republican “principles” Trump has forgone. People would rather have their folkways defended.

The Confederacy lost. But even 150 years later, southern scholars and historians write fawningly of John C. Calhoun and Robert E. Lee, while the elite cannot get enough of Lincoln. Stephen Douglas was a squish at a “time for choosing.”

Whether there were Democratic Party pundits who bemoaned the mass defection of their constituents from “true Democrat Douglas” to “unelectable Breckinridge,” I do not know. But that is telling, too. If there were pundits back then so dull as to think the way to solving the Slavery Question was electing a series of moderate Democrats like Franklin Pierce and James Buchanan over and over again, history will fall out of its chair laughing once it remembers who they were.

That is to say, history will either forget or vociferously mock people like Bret Stephens of The Wall Street Journal, who look to Donald Trump and lament, “It would be terrible to think the left was right about the right all these years,” then go back to writing books about how America should have a more robust foreign policy so as to be the world’s policeman.

If Hillary Clinton wins, in one hundred years, no one is going to say, “If only the Republicans of 2016 had just made a much bigger deal about invading Iran, then America’s descent into egalitarian managerial bureaucracy would have been abated.”

No southern nationalist wishes the Democratic ticket hadn’t been split in 1860. Hell, no one in the GOP even regrets nominating Barry Goldwater. Furthermore, the Clinton administration won’t need allies in George Will and Lindsey Graham, any more than the anti-war left of the George W. Bush years needed allies in Justin Raimondo and Pat Buchanan. If Donald Trump wins, every Stephen Douglas is out of luck. They’ll either have to trade their “principles” for power or become men without a party.

Perhaps they could all go and work for “moderate” think tanks and live off direct-mail donations. Stephen Douglas did not have such a nice safety net as an option. When the war broke out he became a staunch supporter of the his former rival Abraham Lincoln; but he died of typhoid a few weeks into the war. John Bell, that other moderate of the Constitutional Union Party, joined the Confederate cause, survived the war, and died shortly thereafter in relative obscurity. His old friends never quite forgave his treason, and the Confederates had organic heroes to idolize. This is America after all, “to the victor belong the spoils of the enemy.”

Finally, no one remembers the election of 1860 as the year the Democratic Party lost its mind and nominated a crazy secessionist racist in John C. Breckinridge, devoid of the “principles” of the Democratic party’s earlier candidates. History sees the Breckinridge candidacy as the last electoral hurrah of a particular people (southerners) before they had to up the ante in a desperate last attempt to survive. Middle Americans are the same with Donald Trump. It is their last electoral hurrah, not an inexplicable deviation from an abstract set of principles. Should Trump lose, Middle Americans will likely feel (and perhaps be) as defeated a people as were the southerners. But there is dignity in loss in way that there simply isn’t any dignity in being a Quisling, and even less in being a Stephen Douglas.

So as the current year marches on, each and every Stephen Douglas out there is undeniably the sucker of the summer. In the city streets of our country, this summer might well be another 1968, but in the suites of Washington, D.C., that are the homes of Conservatism Inc., this summer is 1860.