Self-ownership, you own your life

â€œSelf-ownership, you own your lifeâ€. To deny this, the proponents of this position say, is to imply that another person has a higher claim on your life than you do. But of course, thatâ€™s not possible â€“ weâ€™re all equal.

Bottom line of the self-ownership-ideology is: “Everyone is equal, so all opinions must be equally valid. Therefore, no one can define a hierarchy of ends in which your life is a means to a goal, instead of an end in itself.” Yet, reality dictates that any enterprise, given one sets out to do it efficiently, requires a natural hierarchy between people. Some are made to think, others to carry out. 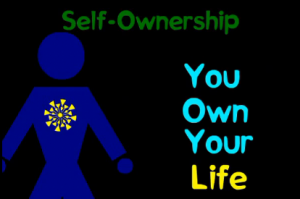 One could bring against me that liberty and equality are different things – and that from the fact we all have the equal right to voiceÂ our opinion, it doesn’t follow that all opinions must be equal. Instead, a follower of the self-ownership theory might say, it’s up to those listening to weigh the value of any voiced opinion.

However, such a person overlooksÂ that even if the self-ownership theory doesn’t say that all opinions areÂ strictly speaking equal, what it does say, is this:Â “If there are higher truths than individual pleasure-pursuit, no one is more qualified than another to define these, since everyone can only decide for himself.” Which boils down to general relativism with barriers defined by law, separating the freedoms and liberties of one individual from the others. Not because these laws are right or Just, but because (a large group of) individuals have consented upon them. The individuals comply because this is the law – but whether they agree or support this law is a matter of subjective personal taste, and irrelevant to society in that sense. Whereas, I would think, a society is held together by a shared vision, a purpose of life, and that this is what normally guides people when setting up rules and laws. The fact this overarching vision has become politically irrelevant, explains why people are alienated from another, why they can’t find their place in the bigger picture. It also explains why some goÂ off in crazy shootouts once they become convinced that there is no purpose in life and that nobody cares about them.

Iâ€™ll give a personal example: Some person came to me and wanted to have a debate. However, I couldnâ€™t make a single point to him. He just ignored anything I said that went against his thoughts. When I formulated any counter-arguments to his ideas, he pretended I never said them. After a little this began to irritate me, and I subtly tried to bring it under his attention. Then he started to make unjustified accusations against me, for example that I was part of a cult or that I was a virulent supporter of conspiracy-theories. He had no basis whatsoever to place me in these groups, but since he considered these groups ridiculous, that made it allowed for him, in his mind, to disregard my words.

This small example points out that the idea that everyone can handle an equal degree of freedom is bound to lead to anarchy. Some people are utterly incapable of objective thought and honest reasoning, and there are too many people around who are not sufficiently rational to handle such freedom.

A different objection to the self-ownership theory is that this sort of naive ideas will lead women to think that they don’t need to care for their children and that they instead need to pursue careers. And they will think that they are the same as men (equal), and as a result also seek to compete with men. This will undermine the natural faculties of the sexes and disturb the equilibrium between them.

If the idea of self-ownership would be taken as the starting-principle of civilization, it would soon stumble upon consequences that make it seem utterly ridiculous:

“Hey you! Go fight against Hitler and the Commies!”

“No dude, you go fight Hitler and the Commies, you don’t own me!”

“Okay then! Instead, I’ll give you money to fight them.”

“No way dude, what if I die, what am I supposed to do with the money, then? Screw you!”

“Accept the money and go fight them! You can give it to your family, so it will be in good hands even if you die.”

“Na-ah, my family doesn’t own me. I don’t need to put my life on the line for them. Let’s just all get our bags and hop in the car and live somewhere where there’s no Hitler an

Self ownership comes down to the idea that if a society is based on voluntary action, this will automatically lead to a free society. I agree that, generally speaking, a free society should be based on the concept of voluntary action. But voluntary action alone does not lead to a free society. It might as well lead to a society where people are completely alienated from one another, where they find themselves within invisible cages. Almost every job has been reduced to monotonous tasks; typing, printing, going to meetings, and generating reports that nobody reads. Dungeons dressed in fluorescent light, phoney smiles and mundane tasks. We were told that if weâ€™d go to college we would be marine-biologists, psychologists, and writers, with the exception of a few, nothing could be further from the truth. All those wannabe artists, sociologists and investigative journalists have been prepared for the reality of the cubicle.

I spoke to one of my friends, and wondered about the kinds of books she was reading. She told me she was reading a self-help book. According to her; â€œa book written for the purpose of encouraging the human being.â€ Her brief explanation made it clear that, going by the author of the book, â€œeverything of your life can be changed in your twenties.â€ The only thing that was required was that adolescents look for money, knowledge, experience, and personal connections. She added that according to her, most 20-year olds are puzzled on what to do with their lives – or at least many of them strike her as somewhat disoriented.

After listening to her brief explanation of the book, I told my friend that the real cause for the problem is that real jobs, then I mean real craftsmanship, doesnâ€™t exist anymore. With the exception of perhaps a farmer, a car-mechanic, or an engineer. If she had been one of these professions, then she would have honed a specific craft or artisanship, that she could identify with. And from this identification a clear path into the future would immediately follow. But thatâ€™s not the case for her; she is an expendable office-worker, hired to do routine tasks, not becauseÂ she possesses specific knowledge. This applies to 90% of young people working nowadays, doing paperwork, office administration, etc. They occupy vacancies that can be filled with expendable labour. I told her sheâ€™ll do the job for a few years, and when she becomes too expensive, they’llÂ hire another recruit that can replace her. Her life is based on her job, since she spends so many hours working, yet her job provides no goals for her beyond the immediate. Therefore her life lacks purpose and direction. Hence she feels a perpetual vertigo, and thinks that self-help books might help against this.

It is, regarding these obvious and objective consequences, therefore ridiculous and naÃ¯ve to assume that â€œself-ownershipâ€ can be taken as a sole entity, a singular absolute, that will lead to liberty. Understandably, this is only preached by those other 10%, since they are already in the positions they aspire to be in and have good reason to stay there. And of course it’s preached by those who read the self-help books instead of Amerika.org. Perception is more pleasing than truth.Â Â Â Â

The other 90%, the people like my friend, will be hurdled into sterile offices like animals, because the world doesnâ€™t want truly creative people. The private sector needs people who can write memos push papers and calculate profits and losses. They find themselves punching in, punching out, surfing the internet, and staying late at work, meanwhile daydreaming about what life could have been. It would be absurd to regard such an dreary, vacuous life as a manifestation of True Liberty, and yet, many of these people were never aware of ever having acted against their consent. Thereâ€™s a greater power at work; an invisible power, controlling them through controlling their thought. It controlled them into thinking they are free, just because they never acted against their voluntary consent.

Usually, governments are blamed for limiting individual freedom. Yet, government is not required for limiting human liberty and human sovereignty. The workforce offers an entire system of ultra-surveillance, ensuring ones obedience â€“ protocols and regulations are all-prevailing. One is told when to show up for work, when one can leave, and what to do in the meanwhile. They watch over you, inspect you, spy on you, correct, number, and assess. You are told what to wear, and trained how to talk. Yet, like I said, hierarchy, if anything is to be done productively, is inevitable, and not all people are capable of thinking for themselves.Â Instead,Â then, letâ€™s do away with the lies, the false freedom-rhetoric, and reveal things for what they are. Even the most totalitarian states never had this much control over their subjects.