Scandinavians Mock Democracy For The Farce It Is 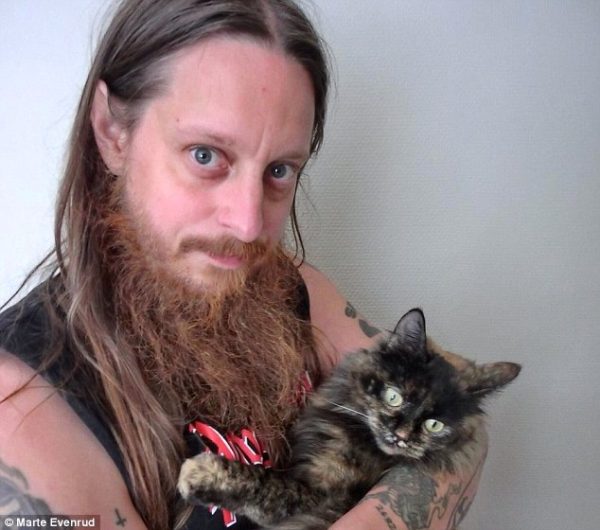 Gylve Nagell, better known as Fenriz, is one half of the heavy metal band Darkthrone, and agreed to become a candidate on a back up list for the local election in his hometown of Kolbotn.

But even though he specifically asked people not to vote for him, he won the poll, and is now being forced to serve on the council for at least two years.

He agreed as he didn’t think he would get any votes, and his campaign poster was a picture of him holding his cat called Peanut Butter, with the caption ‘Don’t vote for me’.

This follows a longstanding Scandinavian custom of mocking democracy by electing odd candidates. To sane and healthy people, government is something that impedes life and generally screws up, not a savior. Only to neurotics does it take on the role of a well-meaning parent.

Just as in the USA, where goats, cats and dead people are elected to serve in political roles, in Scandinavia the government is viewed as entertainment. This time, they got a highly competent musician and composer, even one who has enjoyed provoking taboos as part of the black metal movement:

The lyrics on this album are mostly in Norwegian, and half of them are written by Varg Vikernes (a.k.a Count Grishnackh) of Burzum. At the end of the song ‘As Flittermice As Satans Spys’ the famous “In the name of God, let the churches burn” backwards message can be found. This album has an even worse production than any of their earlier releases. I always thought that they recorded this album on a 4-track portastudio, but Vermin of the ‘Total Death’ website informed recently that if you listen closely you will hear that they actually use 5 tracks… guitars in left and right speakers + bass, drums and vocals.

Darkthrone had to face a lot of problems when this album was to be released. First, the back cover of this album says “Norwegian Aryan Black Metal” (or rather, Norsk Arisk Black Metal) And on top of that, Peaceville, the english label that Darkthrone was still on at the moment, at first didn’t want to release this album, because of the statement “We would like to state that ‘Transilvanian Hunger’ stands beyond any criticism. If any man should attempt to criticize this LP, he should be thorougly patronized for his obviously jewish behavior” by Fenriz, that he wanted Peaceville to add on the sleeve to the album.

After Peaceville refused to release the album because of the statement, Darkthrone came out with a press release to defend themselves, saying that the word “jew” is commonly used in Norway as another word for idiot etc.

We look forward to his contributions toward Norway, and toward further eroding the toxic illusion that is democracy.